Bernie Madoff’s kids are really lucky. OK the guy is a terrible sleeze and is going to go to prison for 150 years. That’s not why they are lucky. Here’s why. Even a slimy, no good, sleeze, is going to grow old. There is no place where it says it has to be gracefully. People just get old. It will happen to all of us. But Bernie may do one good thing. He has found the perfect solution to growing old and not saddling his kids with any responsibility for his welfare. As someone who is caring for an aged parent, this is not a small thing. When people talk about how he will kill himself before he gets incarcerated. I say, why would he? What has he been doing for the last six months. He has been stuck inside a luxurious apartment with no one to talk to and nothing to do-except find ways to bury his money. OK, well that’s no longer an option. Now, his family can visit him and bring cookies. He will have books, television and movies. He’s 70, so here most likely, there won’t be any heavy lifting –maybe he’ll peel a potato or two. Or maybe he’ll teach a class about investing in severe, rough, or disastrous times for the stock market. Probably they’ll let him work on a computer. His children and his wife have socked away millions. They won’t suffer. She has even asked to keep the penthouse and be compensated to the tune of 60 Mil. Even if that doesn’t happen we all know they have enough money to be happy. And isn’t happy what we wish for when it comes to our loved ones. He has the found the perfect solution to the problem of aging. Three meals a day, activities as desired and free medical care. And he doesn’t have to pass a “means test.” If only all of us had those kind of benefits when we are old.

Is this punishment enough for Mr. M? Maybe we should see what punishment means. . Punishment is defined by the Merriam Webster dictionary as, severe, rough, or disastrous treatment. Is that what will happen to our man Bernie? The people he cheated out of millions don’t really get anything from Bernie going ‘away’. They would probably be happier if he just gave them their money back. Obviously, that’s not going happen. His wife and kids need the cash – family first. But what would a satisfactory punishment (remember the definition), be for a guy like that? Make him watch more than one high school production of “Cats?” Oh that’s a good one.

And while we’re on the subject, David and I have taken to listening to books on tape as we drive the 250 miles from DC to NY and the additional 250 to Boston and back. We have listened to at least 30 books. Listening to books can be addictive. We are not quite as bad as our friends who were driving from St. Louis to Tampa, and when they hadn’t finished their book by Northern Florida, continued on to Miami until the book was complete. But we are stupid about our listening literature. We’ll start listening to a murder mystery and no matter how tedious, or badly written, we want to know who committed the crime. It often doesn’t matter how terrible the story is, as long as the reader is decent, but we must know the answer. It’s like we’re punishing ourselves for not reading, rather than listening to the book. So I was thinking, while we were not only listening but ranting about our current book, maybe Bernie should be made to listen to a poorly written book on tape with a bad reader. It’s so totally painful that it may provide some justice for his victims. Like every time he tries to turn off the tape the authorities say, “Oh no, this is brought to you by Elie Wiesel and the foundation you destroyed. It’s something by Carolyn Hart and you must listen until you are screaming in pain from the overly generous and thoroughly tedious description which neither adds to the story nor the narrative. Whew! 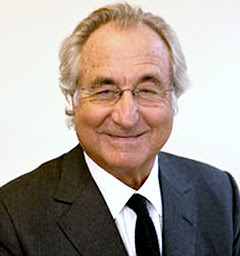 Some of my favorite punishments do fit the crime. Like the kids that try to rob the elderly and then they have to do public service by working in an elderly facility. But most judges aren’t that brave. In my estimation, the punishment should fit the crime. And since we have no control over the legal system, we should insist on a little creativity. We should insist that the perpetrator be made as miserable as the victims. In the Madoff case the money won’t be found, the guy is never going to do anything that makes anyone happy. So I think just making him as miserable as possible for the rest of his life, is the poetry his victims would read with great relish. We’re just sayin’...Iris
Posted by Iris&David at 5:28 AM

I agree with you both on several accounts.I have vast experience in the care giving and total immersion of two aged parents over a ten year period of my life. Also
I was one of the photographers in residence at both of Bernie's last two "public" appearances. Getting to court at 2:30am on his last day left 'me' feeling old.
He looked particularly drawn and frail, no doubt complicated by what he thought awaited him. Now that his safe keeping is assured, I agree that the bad reader concept is an apt one, with the following enhancements. I think every other book or so should be in a language that Mr. B is not fluent in. Such as Yiddish, to, perhaps help reacquaint him with the affinity group from which he came. Surely there must be many financial plotted potboilers, considering that the global meltdown is quite mature now. A good Russian or Chinese thriller on these topics might inspire him to thoughts of redemption if only to shut the reader off. Lastly, a printed translatable narrative could be offered to help him if he is a model resident while moving through his Freshman class at the BOP Academy.
Regards,
Rick Maiman/Polaris