....and Phinney Played a Great Game 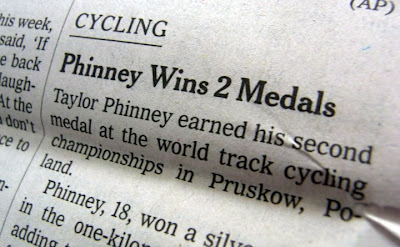 My mom, now 91, was a graduate of the Journalism program at Stanford in 1938. She never really worked in journalism as a paid reporter, though for the last twenty years, no one was more rigorous in writing local newspapers and making them aware of small factual errors which crept into the paper. For a while she even had an arrangement with the Salt Lake Tribune that she would be an unofficial “fixer,” advising the hot shot J-school kids about what needed repair in their printed work. In the fall of 1939, just a year after her graduation, she had even ventured to Washington DC to see about becoming a reporter, and had made arrangements with Al Friendly, an old friend from Salt Lake City, then an editor of the Washington Post, to visit and see about working at the Post. Bad luck: the day of the appointment, Sept. 1, 1939, was the day Germany invaded Poland at the outbreak of World War II. Al got busy with the news (this is what newspaper people do!) and her appointment never got rescheduled She eventually returned to Salt Lake and had the life which I came to know.

My dad, who had done a number of jobs during the 30s and 40s – most of which revolved around the jewelry and watch trade, nevertheless had imparted to me, quite by accident I suppose, a cardinal trait of journalism: He who writes the headlines, gets to determine what it says. This isn’t so far from the concept of a free press belonging to those who own one, I guess, but dad’s version was a little more down to earth. In college, one of his closest friends, a certain Forbes Carleton Phinney, not only played football, but worked as a stringer for the school paper. And apparently Phinney never missed a chance to give his reports that certain ‘first hand’ flavor. He always phoned in a short version of the game action with a few highlights and at the end of every report finished with “... and Phinney played a great game.” It was a wonderful way to imagine history being written by its participants, rather than just by those on the outside with no direct involvement. So imagine my astonishment this morning as I scanned the New York Times to see the headline “Phinney Wins 2 Medals.” I didn’t really have to know who Taylor Phinney, 18, the cyclist, was to have a feeling that the perhaps there was a bit of inside PR at work here. I take nothing away from the young man, who grew up in a household with both parents world class athletes. He won two medals at the World Cycling Championships in Poland this week. Yet, I sort of hope that at some point he might have added to his cycling portfolio by taking that part time job with the high school paper, and have had the opportunity to make that one phone call at the end of every race which ended ... “and Phinney rode a great race.” We’re just sayin’....David
Posted by Iris&David at 11:52 AM