Washington DC has a number of magnets which are absolutely irresistable. Well, if you are a photographer, that is. We have a wonderful selection of marble monuments, from the Capitol to the White House, to the Lincoln, Washington and Jefferson. We who live here never really call them by their full names. You just go to the Washington (Monument), or to the Lincoln (Memorial). They almost become like our own buddies. We know where they are, how to get there, and usually what to expect when we arrive. But there are a few slightly less iron-clad magnets, much more fleeting in their presence, and often easy to miss if you oversleep. 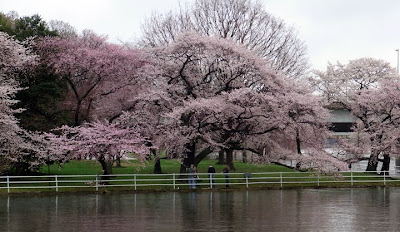 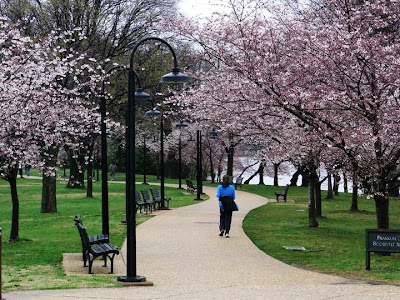 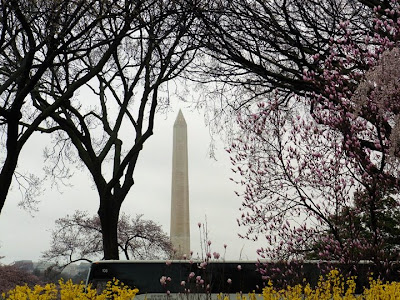 One of the great and slightly more metaphysical of these is the hub bub surrounding the spring blooming of cherry blossoms. For almost a century, since the Japanese gift of three thousand cherry trees around the tidal basin, the annual ritual of paying homage to the Cherry trees has made March/April in Washington a driving nightmare. I try and imagine that in addition to everything else this poor city is stuck with, that bad drivers from across the country seem to congregate at Cherry Blossom Festival (yes, of course it’s now a Festival, too) time in early April. From the time Jordan was 5 or 6 we would choose a Tuesday or Wednesday morning, bundle her and Jzenhia (our Russian exchange student) or Edwige (our wonderful French au pair/now daughter) up in blankets, and roll out of the drive way at 5:15 in the morning, to get a quick walk around the basin before school started and the crowds became sclerotic. We did this for years, and in the five years since all those girls have moved on to other habitats, Iris and I try at least once a year to make the trip. This year, as has been the case in the last couple, we realized after last night’s rainstorm that “Oops, we forgot to do the cherry blossoms...” and worry that the pelting raindrops have caused the array of blossoms to degrade to a few splashes of pink. This morning, afraid once again that we’d missed the show, we hauled over the bridge, dodging legions of those lousy drivers, and skipped past the “Road Closed” signs to the area near the Jefferson where we traditionally start. I have to admit that in many ways it was not a great year. The rains did deplete a number of trees to mere shadows of what they must have been like on Tuesday or Wednesday. 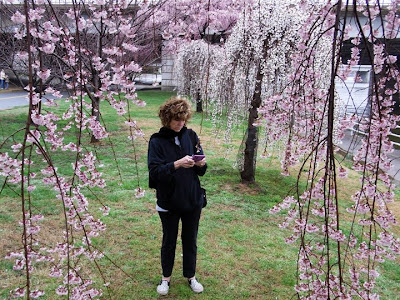 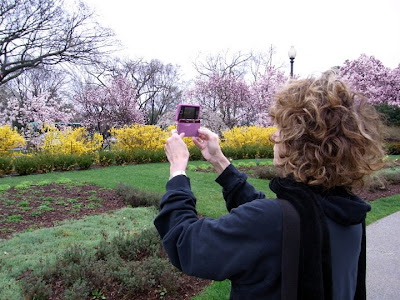 Yet, being a weekend, the magnetic appeal of those pink buds was still proving a powerful force. And as we got out of the car, there they were, the matched sets: photographers, their tripods, and a lot of pink laden branches. It never fails to amaze me, the optimism these photo pholk show as they hope to find that one true, wonderful, and never before snapped image of a pink blossom. You have to be pretty optimistic to actually think you ‘ll get a picture worth remembering. The overall impression, especially if you squint just the tiniest bit, is of pink and more pink. But if you look in the manner of a camera lens, harsh and unforgiving, what might have seemed like a breezy color picture becomes something underwhelming. There are stunningly shaped branches which define the word crag; unending little tunnels to frame the Washington. 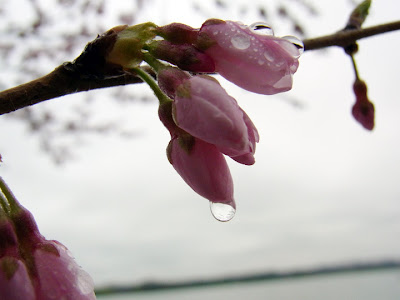 And on a macro level, a chance to sometimes see more in one rain drop than your eyes together can capture. Even Iris, the non photographer, was drawn into wielding her LG phone as a photo-capturing device, sending those images to New York-bound Jordan, even as we walked away. Several of my photo-nerd colleagues, having heavily invested in lens and tripod, not to mention time, were clogging the paths to the pink leaves, I felt obliged to watch, and see how things were developing, you ‘ll pardon the expression. The Cherry Blossoms remain that one forceful magnet that literally pulls the photographers out of their living rooms and onto the land of wet and soggy feet.

If only there were some way to translate all that beauty into a picture that lived beyond a postcard. As many times as I have been, I have to say the the people who make the most sense at those morning al fresco sessions are the ones who bring their picnic baskets. Croissants, and coffee, thick soft butter, jam as strong as the arm of a good friend, and maybe even a hard boiled egg. It’s about the closest thing we Yanks come to a reasonable version of Manet’s picnic, except those mavens of law enforcement, the U S Park Police would insist on covering up the nude picnic’ers. Kill joys. 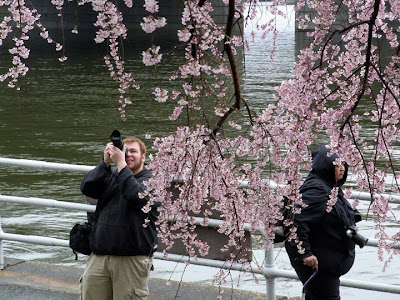 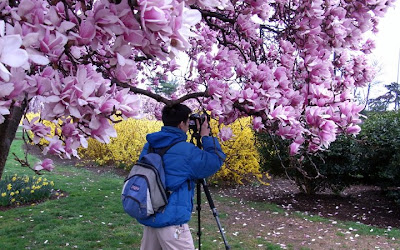 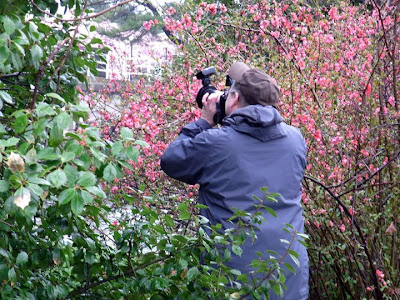 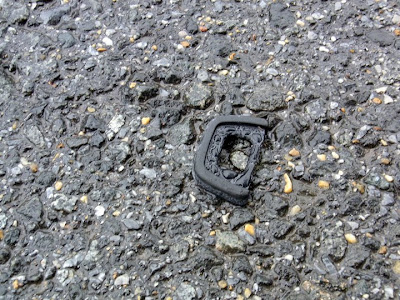 Some poor photog is missing his eyepiece
And yet if we could just talk a few of the photo crowd into wearing those wonderful 19th century berets, perhaps the final results of the photo onslaught would be more bearable, helped along by that spirit of tradition and art which meet together on the banks of the Potomac. I’m looking for my beret now. We’re just sayin’.... David 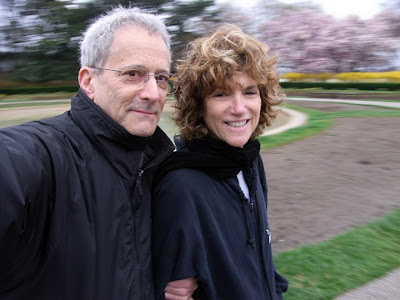