Praise and Honor to God

“Praise and honor to God”...was how he started the announcement. Was that a Moslem, Allah is great, or was it a Christian, praise be to God. Probably both because he appears to be a man of the world who comes from many cultures and many colors. He went on, “You didn’t come here for me. You came because you believe in what the country can be.” This was followed by some usual, but poetic, rhetorical comparison between war and peace, hope and despair. He continued by saying “We are one people reaching for what’s possible.” He said that ‘A young boys violent behavior leaves a hole in the heart that no government can fill.’ And speaking of government, he was firm in his belief that the ways of Washington must change. He said we were distracted by our own failures, and we shouldn’t believe the doody balls who tell us anything different. Well maybe he didn’t say doody ball, but that’s what he meant. 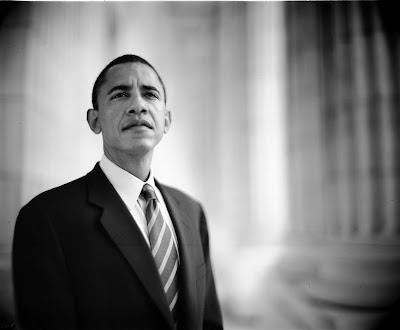 Barak Obama, born in Hawaii with an African father and a mother from Kansas, is prepared to lead the nation. And, he tells us, we don’t need to worry about his Washington experience—it doesn’t prepare you for anything but lobbyists and a fractured bureaucracy. I love this guy. I want to believe him.

Hillary must be beside herself. There is going to be constant comparison. And if she raises enough money, and the primaries are all moved up, she won’t have to confront the ongoing commentary about what he is and she is not because it will be over before it starts. But I would love to see a real campaign. One where we get to listen to debate about issues and the future. One where labor has to make a choice about who to endorse. Actually, that was the only part of the speech that I felt was too carefully crafted. Teachers getting paid more but being accountable—the teacher’s union hates that. Putting people back to work with labor taking a lead in rebuilding the economy. And he didn’t say that the government needs to work so people can aspire to the “middle class”. That is included in Hillary’s stump speech. I suggested they take that out because no one ever aspired to be limited to any class—people aspire to be successful. I believe one reason for Gore’s defeat was his constant reminder that he was for the people not the powerful. Now, who do you know that wants to think of themselves as powerless. And Kerry’s division of people by education—does the phrase non-college educated, instead of high school educated, sound a bit elitist. Sometimes we just don’t get it, but never mind, some people are simply not smart enough to ingest my wisdom. Yet another case of you think you get what you pay for.

Back to Barak. He is articulate and clean. When Biden said it he inferred that the other Black aspirants were not. But I think he is articulate and unencumbered by commitments to what he implies is a corrupt bureaucratic system. He is young (at least younger) vital, dynamic and yes, he admits to “doing a little blow.” But the most important quality he possesses is that he is comfortable about who he is... and his wife seems to be comfortable with who he wants to be.

This is no small item when crafting a campaign. The reports are that she will be instrumental in developing strategy and direction. There is always some danger in this kind of involvement because people who have personal relationships with a candidate think differently than campaign staff, about what needs to be done to win. Additionally, what is good for the candidate is not always good for the person--and since they care about the person—it may affect political decision making. From all reports she’s a terrific person, a smart and independent thinker. That’s the good news. The bad news for her future staff is that she is smart and independent. A spouse is critical to the success of the campaign. The dangers always come with over involvement. The 1992 “you’re getting two for one” the 2004 “I am entitled to say and do anything I want” approach to the campaign. I think the public and the media want to see a spouse in supportive rather than competitive role. When the spouse steps over the line, neither show any mercy. Much of my campaign expertise was in roles on a spouse staff. Quite simply it’s more difficult to be a spouse than a candidate because everyone takes care of the candidate, and no matter how it begins, ultimately the spouse becomes an inconvenience and creates problems for all involved. It just can’t be prevented because the candidate is distracted and the politics becomes so complicated.

In my first political campaign I worked for Ella Udall, the funniest and most difficult political force I ever encountered. And I don’t say force frivolously. She kept Mo Udall (a popular but unknown Congressman. from Arizona who ran for President in 1976) on the road. He loved her and wanted her to be with him when he traveled. And she loved the attention of the people and the press. But she drank too much and wanted to party all the time. Mo wanted to work and sleep but Ella would drag him to whatever bar in whatever hotel, to keep her company and entertain the press. It was fun but not very productive and eventually who she was did not help to move the campaign along. Interestingly, the press loved Mo so much that they never address Ellas’ follies in anything they wrote but if had he been the nominee they would have had no choice.

I think the saddest thing that has happened to 21st century Presidential campaigns is that they are not much fun. There is no camaraderie between staff, press, and Secret Service. The times and technology have changed so drastically that there is little trust and less levity. Too much media, too many pitfalls, and technology that prevents interpersonal, one on one communication. It’s a year until the primaries. Plenty of time for novelty. I wonder what new political gimmick or issue will emerge as the reason for candidate success or failure. I can hardly wait to see. We’re just sayin... Iris
Posted by Iris&David at 9:54 AM

Jack Kennedy was a friend of mine.

Senator Clinton, you're no Jack Kennedy.

It's a long, long road to November, 2008. Many twist to the road ahead. And then there is the loose canon named W, and what he may or may not do to make events even more interesting. Beward the October Surprise.

I am sure Hillary would rather there wasn't any "Obamania" surrounding 'the' one person that may stand between her and the very expensive public housing on 1600 Penn...

Iris,
First, let me say I love your blog ~ both your and David's posts. And I'm following your political posts, because I suspect we think alike on that.
Having said that, I have to tell you I was a bit irked at your comment re: teachers getting paid more and held accountable, and the union not liking that. As a teacher myself, I am so tired of this constant talk of "accountability", as if children were some factory product, and teachers line workers charged with putting them together.
I teach in California, which has its own unique problems, but much of what I experience is national. I already have tons of accountability charged to me. I am single-handedly expected to take students who speak English as a second language from a first grade reading level to fifth grade, before May and the state tests. I must take children, of any language, but few skills in it, from ignorance to grade-level knowledge in 9 months. I have 35 students, no aide, and five hours a day, usually 5 days a week to effect this miracle.
What does society demand from the parents of these children? Nothing. They have no accountability at all. Their accountability ended with the birth of their child. The schools have been made to take on full responsibility for their children. We feed them, mostly for free. We clothe a good number of them (we round up as many charitable organizations as possible to do this). If a child is not learning well, parents call me and demand that I tutor them before or after school (for free, of course. It's my duty, don't you know.)
Do they have any responsiblilty for ensuring that their children attend school regularly? No ~ it takes months to get anyone to notice that a child is absent too many times, and then it takes months more to get the district and city to act on it. So "absent Johnny" is gone from my school before anything is said or done.
Do parents have any responsibility for raising children to value education? No. Most of my students' parents don't speak English, and don't read or write in any language. They don't value education, and their children don't, either. My district runs ESL for Adults classes on local school campuses. It's free. Attendance is abysmal. Why would their children want to learn English if their parents can't be bothered to do so?
Admittedly, I teach in a poor neighborhood, and I know, first hand, the deleterious effect of poverty on a child's future. But ranting that teachers must be more accountable does nothing to alter the fact that we already have far too much responsibility, and far too little authority. It does nothing to alter the fact that many, many parents have abdicated all responsiblity for their children's education and upbringing. It does nothing to alter the fact that education is routinely underfunded on all levels. It does nothing to address the fact that school districts have become forced to "teach to the test" for economic survival. (NCLB is misnamed. It should be called "Every child left behind in science, history, art, music, performing arts".)
Sorry for going on and on, but this just touched a sore spot in me.