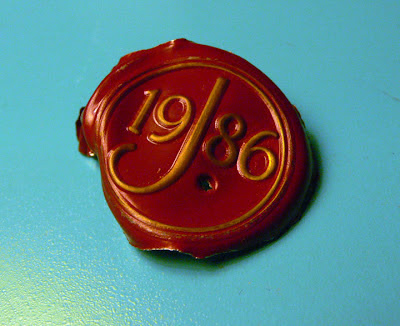 Jordan didn’t go back to school as planned, but I’ll get back to that later in the blob. A few months ago she asked me if we could get tickets to the “Edward Scissorhands Ballet” which was going to premiere at the Kennedy Center. I said “sure”, and called for tickets for the weekend when she could be home. Apparently, it was a much sought after ticket so the good seats were pretty much gone. 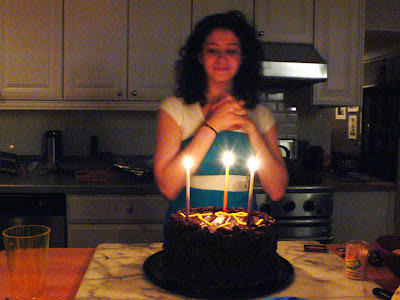 Although it’s not something I like to do—ask for a favor—I called my old pal Jim Johnson, who is on the Board of Trustees at the Kennedy Center, and asked him if there might be seats available in the Trustees Box. I explained that it was Jordan’s 21st birthday and this was something that was especially important to her. His assistant called me back within minutes to say that the seats were ours.

When Jordan was little, Bill Clinton was the President and we had access to the President’s Box at the Kennedy Center. It was a terrific way to see any show. And see them we did. All we had to do was call Debbie in the West Wing and she made it happen. For years Jordan thought that when you went to the theater, no one sat in front of you, you had a private bathroom and there were always snacks (one of which was peanut M&M’s encased in a cardboard box complete with Presidential Seal), and sodas available in a refrigerator in a lounge right behind the seats. The Trustees Box is adjacent to the President’s Box and although there are not all the perks, the seats are just as good. Besides, part of the joy of being 21 was that she could go to the Terrace Restaurant and order an apple martini, so who needs M&M’s.

We had decided that as long as she was coming home for the long weekend, we would throw a little birthday party for the grown-ups who had always been part of her life. She even agreed that it would be fun and as long as Lina, her friend could be there, she wouldn’t be bored. It was kind of a, line up the usual, but not an every day occurrence anymore, suspects.

We had another full day on Sunday. We got tickets for matinee performance of “Carnival” – which was a lovely production. David dropped us off because the parking at the Kennedy Center is almost as much as the performance tickets. The decision to charge a large amount for parking is something I don’t understand since it is totally out of whack with their apparent desire to offer all kinds of free cultural activities. But maybe that’s how they afford to embrace the community. David was also kind enough to retrieve us—in what appeared to be a blizzard. The weather in DC is always weird and although it was lovely when we went to the theater, when we left it was snowing so hard we couldn’t see the road. I, being ‘glass half full’ on a few occasions, thought that no one would come to 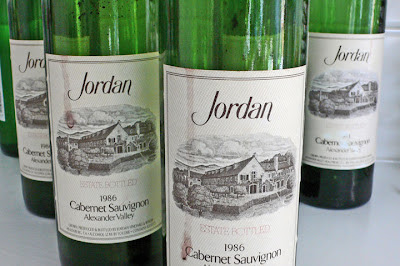 celebrate and drink the 7 bottles of Jordan Cabernet (2, 1983 and 5, 1986) we had carefully and lovingly decanted, or eat the mounds of food I had prepared. Luckily, I was incorrect.

The Daley’s arrived first, the Cowarts and Mal Caravetti next, our wonderful neighbors Phil and Marty walked all the way across the street, and Paige came, unfortunately without the boys, but it was terrific to see him. Then the onslaught with Caroline, Richard and Suzanne Rodriguez -- Anne and Don Viviani (the parents of Jordan’s high school sweetheart who we stayed attached to, even if the kids did not). 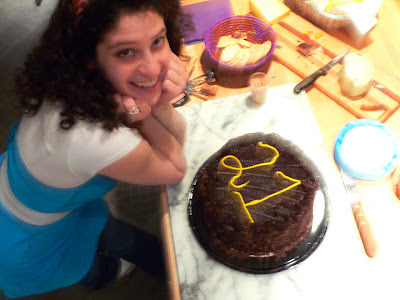 Edwige and Chris came with our 2 pretend Grandchildren, Susan Povenmire with Chinese New Year wishes and then Lenny and LouAnne Sherp—who we met when the kids (Libby is their fabulous daughter), were in Kindergarten and we thought, since he and David were the only fathers who picked up and delivered the kids, that he was either a drug dealer or unemployed. Neither was true, but he and Lou (who are our age but much more adventurous) were once a song and dance team in the far East. It was yet another smashing birthday success. 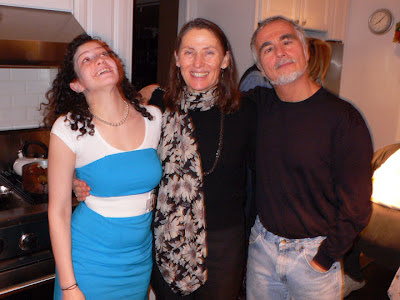 Jordan with Ann and Donn Viviani (he of the crossed eyes)
At a little after midnight when we had been asleep for a few hours, (the party started and six and by ten most people were gone), Jordan woke us to say that she was reading the Face Book and someone had posted the sad news that her elementary school friend Joey was dead. She didn’t have all the details but this morning we learned that at about 5am Joey, who was driving, hit the median on a highway in Tallahassee and was killed. “Little Joey”, was what we called him because he always seemed small in size –not in personality, grew up around the corner. When we moved into this neighborhood there weren't many children Jordan’s age. Joey was one of the few. He was always enterprising, and since there were so few kids he was the one who would sell his services to shovel the snow in the winter and rake the leaves in the summer. He and Jordan went to different schools after the elementary years, but he was “little Joey”, and always in her life. And that ended with an asphalt monster at some ungodly hour of the morning. There is not much more to say except Jordan needed to be home with us today instead of making her way back to Boston. We are always grateful to have her for as much time as we can. We’re just sayin....Iris
Posted by Iris&David at 6:59 PM

Why do tragedies interupt the joys of our lives? Sorry for your loss. Rest in Peace Little Joey.

With the triumphs, come the tragedies, unfortunately. Seems the lines are written as we go. Yes, the times we have with family and loved ones are precious..
I,too, am sorry for your loss.

We are the specialists in tickets we have all the ones that
need to obtain and for any event that desire to attend not
late more and contact us now.
The best place to obtain tickets for: Sony ericsson open, NCAA Final Tournament Four, acc tournament, big east tournament, at: http://www.ticketsofamerica.com

Generic Viagra (sildenafil citrate; brand names include: Aphrodil / Edegra / Erasmo / Penegra / Revatio / Supra / Zwagra) is an effective treatment for erectile dysfunction regardless of the cause or duration of the problem or the age of the patient.
Sildenafil Citrate is the active ingredient used to treat erectile dysfunction (impotence) in men. It can help men who have erectile dysfunction get and sustain an erection when they are sexually excited.
Generic Viagra is manufactured in accordance with World Health Organization standards and guidelines (WHO-GMP). Also you can find on our sites.
Generic Viagra is made with thorough reverse engineering for the sildenafil citrate molecule - a totally different process of making sildenafil and its reaction. That is why it takes effect in 15 minutes compared to other drugs which take 30-40 minutes to take effect.
[b][/b]
Even in the most sexually liberated and self-satisfied of nations, many people still yearn to burn more, to feel ready for bedding no matter what the clock says and to desire their partner of 23 years as much as they did when their love was brand new.
The market is saturated with books on how to revive a flagging libido or spice up monotonous sex, and sex therapists say “lack of desire” is one of the most common complaints they hear from patients, particularly women.