It was pouring when we left for the hospital. But what choice did we have—this was one event that absolutely couldn’t wait. We were prepared to entertain ourselves with cards, Yatzee and Connect Four. We were tremendously excited about the change that was about to happen to our lives—a baby girl.

I decided to have an epidural, since when I had Seth it was a ‘natural childbirth’ and the only thing I knew that would relieve the pain—which was like having a Mack truck run over me every thirty seconds -- was to kill me. Seth was truly worth the body trauma, but when people say that after a while you forget the pain, they are telling a big fat lie. In those ‘olden’ days, a natural childbirth was without medication. Today it mostly means without a caesarian. The consequence of that experience, was my opting to be awake but numb. (In addition, I wasn’t prepared, since I hadn’t had a baby in fifteen years, and we had been asked not to come back to the childbirth classes—but that’s another blob.) The labor was much longer than the doctor anticipated and when the pain started to interrupt our board games they decided to give me more epidural medication. 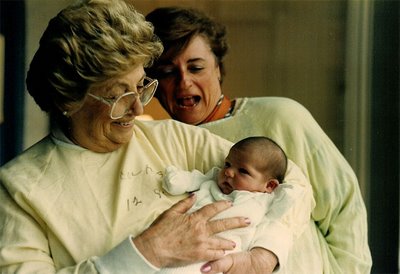 With Nana and Aunt Irene, Day 3

Something horrible happened after they gave me the booster and I felt the life rushing from my body. David knew something was wrong but before he even called the nurse for help, my doctor was there. He got me up on all fours and announced that he was going to have to ‘take that baby’, and fast. I agreed but insisted he give David enough time to get there. When I arrived in surgery – literally five minutes later -- there were two residents preparing for the event. I insisted they take their masks off so I could see their faces. I believe that I should recognize anyone who has seen me naked.

As soon as a green coveralled David walked in, the doctor said, “OK let’s go” and “here she comes”. It was almost within the same breath. One resident said he had never seen a caesarian done as quickly or as clean. David watched the whole thing—the nurse made him do it (“… don’t you want to see your baby being born” she asked?). And before we could shed a delighted tear, there she was in my arms. 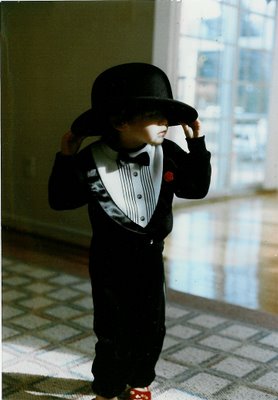 
Caesarian babies are quite beautiful because they don’t struggle coming through a hole the size of the top of a water bottle. And “not struggle” was exactly the way we wanted her to live her life. It’s amazing, but the way children are when they are born, is exactly who they are when they grow up. My children were fabulous right from the start and have remained that way. OK, so I’m bragging, but from the time she opened her eyes we knew, that she knew, that everyone she encountered, absolutely wanted to meet her. 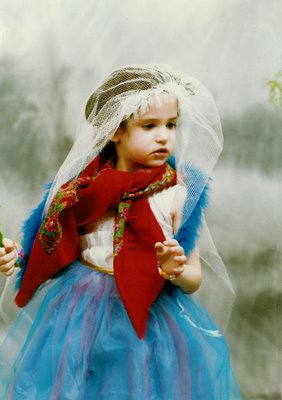 Every day was Dress & Dazzle day

We never had terrible two’s or three’s or four’s or any terrible with Jordan. Even at age two she loved to go to a restaurant and actually behaved. In fact, she was so good all the time that my friend Tina and I (always trouble makers) were thrilled when at age 13 she lifted a pair of bowling shoes from the alley. I think some of it had to do with the fact that we were older parents. We seemed to be much more good humored and relaxed than young or first time parents. Like when Seth was born, I wanted to strain the air with chicken soup and when he tried to be independent I wouldn’t let him because I was certain he would hurt himself. And while I did follow her to school on her first day as a safety patrol and I did follow her (in another car) when she decided to go it alone on her first Manhattan subway ride, I encouraged her to become her own person and not be coerced by convention or opinion. And that’s who she was and remains. Different silly socks, hair in riotous curls, always performing, singing, dancing, (starring) and exceedingly good natured. I always say she has my mannerisms but thank god, David’s disposition. 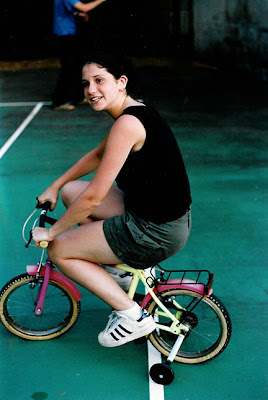 Riding a 4-wheeler in San Casciano
Our only regret was that she never learned to ride a two-wheel bike. But I was relieved about the fact that not riding a bike meant not having to look both ways when she crossed the street. (She didn’t ever pay rapt attention to foolish details.) 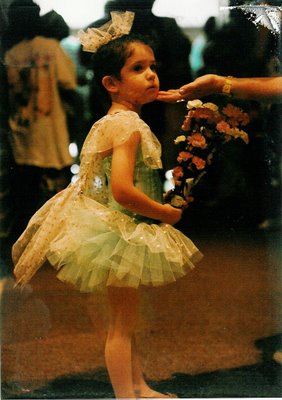 The Ballet Years: Tiny Bubbles
From the time Jordan met Melanie in kindergarten, it was clear that she made lasting friendships easily, and made our house a center for all her friends to frolic. One year we had a hurricane or a snow storm (I know the difference but my memory has dimmed), and her four best friends happened to be at our house when it started. They didn’t go home for five days. Finally, their parents insisted they depart and give us back our house. But we would have been happy to have them here for a month. 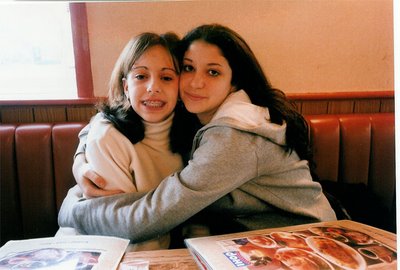 Jordan and Melanie
Jordan is an aspiring performing artist. From the time she could walk she has been a dancer singer and an actor. Musical theater was the only career to which she has ever aspired. We knew she loved musical theater when, at age four, David Fisher took her to see ‘Les Mis’. When the show was over she was like a rag. She got so involved in the production that it was almost as if she had been performing in it. And when we asked Fisher if she had behaved he said that the only time she spoke during the three hour performance was to say, “Please don’t sing David Fisher.” We think it was her love of the show rather than Fisher’s questionable vocal ability. For us, her love of show tunes meant that we didn’t have to be assaulted by terrible dissonant rock music. It was show tunes all the time. And since most of her friends also loved the theater there was always a non-stop “let’s do a show” at the Burnett house.

Jordan (today - 21) is a Junior in college. Her resume includes performances in elementary school, Stage Door Manor theater camp, high school, a Broadway showcase, The Fringe Festival in NY, the lead in an off-Broadway show and as a singing server at Ellen’s Stardust Diner—on Broadway. She also produces a radio show which you can hear on WERS in Boston 88.9 on your dial (you can get it on the web) and she managed to get one of the leads in this years spring musical “On the Town.” 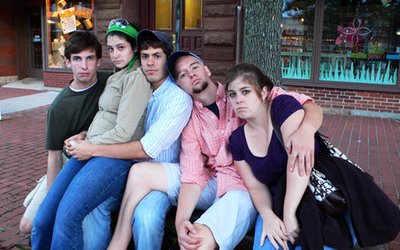 JKB with her roommates
Are we proud parents? Is she a diva? You bet. But here’s the most important thing. Jordan is a beautiful person on the inside and the outside. God gave her a wonderful voice and a big talent. 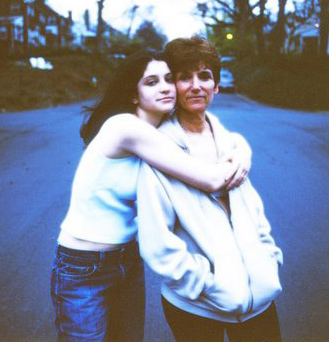 JKB & her Mom
She is a fabulous, kind, sweet, loving, sensitive human being who has a passion for following her dream, and cares deeply about numerous people and important issues. And yes, she still knows everyone she encounters really wants to meet her. We hope she will have an extraordinary birthday without spending too much time at the local pub. We’re just sayin...Iris (& David) 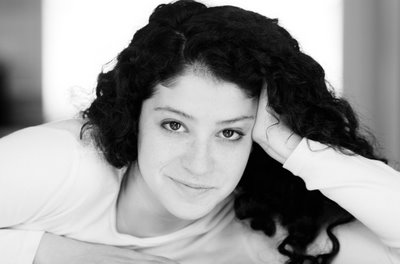 Now show us your proof of age with pride. The date for legally buying beer (or preferably wine - red with a good nose) at Safeway is now younger than you!

Happy Birthday Jordan. She is really pretty. Glad to have come across your blog. The pictures are so beautiful. nice post.
Drop into my blog on friendship greeting cards for some lovely e-greeting cards and friendly tips.

EVERYONE should follow their dreams and passions! Full steam ahead, Jorda..and Happy Birthday..I've a feeling we'll be seeing your nsme in lights!