Iris and I are on the plane from Denver to Oakland (yes, there is an airport THERE, too) this morning, having just concluded an absolutely fab World Premiere of our video project The Gefilte Fish Chronicles. Three years ago, along with another Dubroff family son-in-law, Jimmy Robinson, I started to video tape the preparations for, and execution of the amazing ritual which is known at the Passover Seder. The original Dubroffs, Abe and Minnie, (Iris is a Dubroff , I’m a Rosenblatt) settled like thousands of other Jewish immigrants in Brooklyn after their trek from Russia in 1904. For most of the 20th century they did what Jewish families do in the spring: They celebrate the ancient departure of the Jews from servitude in Egypt, and and do it in a traditional meal which brings the family together for the celebration. Often, Passover is the one time of the year when Jewish families gather cousins, aunts, uncles, and friends for a long night of prayers and, yes, eating.

Having grown up in a fairly large family in Utah – we would have 30 to 40 people at our seders, I was, nonetheless, amazed at the breadth of preparations the Dubroff clan went to in putting together their Seder meals (there is ‘first night’ – usually just a small group of 20 or so, from in town, and ‘second night’ which is for all the out of towners.) In traditions that dated back a century to the small apartment the family shared over their butcher store, I was continually amazed to see the effort required to produce the real thing. Six weeks out, the buying and chopping, and tasting started (thank goodness for Freezers!), and preparations went on right up until the afternoon of the arrival of all the family members. Nothing was ‘store bought’ Everything was made in house. Eighty pounds of gefilte fish, sixty pounds of beef stew known as cholent (from the French for “hot” and “slow”… it cooks for 18 hours), and tubs of mazto ball soup. It is quite an undertaking, and I felt that documenting it would be something the children in the familyi would one day be able to look back on and appreciate what their heritage was. 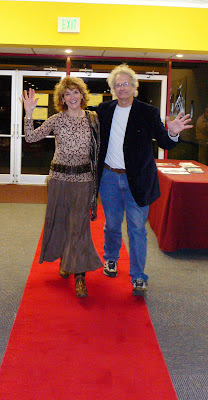 Iris and David on the "Red Carpet" at the World Premiere / Denver
We shot 30 hours of tape, and engaged a former LIFE photographer-turned video editor Dick Swanson to have a shot at putting it together in a way that made sense. He did a great job, and the third visit Iris and made to his house to see what he’d cobbled together out of all our tapes, we both had one of those jaw-dropping reactions – we realized that we really HAD something: it wasn’t just a little family home movie. After Dick’s final cut, we gave copies to the family at the next year’s Seder, and everyone was pleased beyond belief. Yet, as we tried to see if other outlets would be interested, we realized the project needed a bit of tweaking. Stephanie Daniels of 07 Films in Jersey City made a number of minor but very important additions, and in the end we found ourselves with a 56 minute documentary. The Gefilte Fish Chronicles was born. We have entered the film (its tape, video tape, but everyone calls video “film” these days, so I guess I can, too) in a dozen film festivals, trying to let the rest of the world have a look at one family’s Seder. Yesterday, aside from viewing in Swanson’s basement, and our living room, was the World Premiere at the Denver Jewish Film Festival. 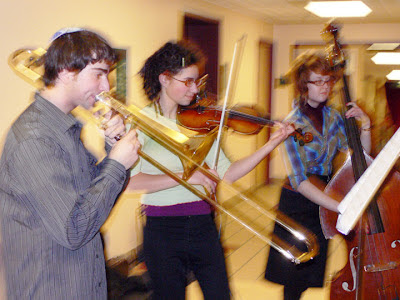 a local Klezmer Band greeting the attendees..
Best of all, dozens, literally, of cousins and friends came to Denver for the show, most of whom hadn’t seen anything but the very first edit, and many of whom had seen nothing. We were excited, yet trepidatious. Coming to Denver from Boston (Jordan’s 21st birthday..) I left my sport coat in a hotel closet. I was ‘under dressed’ for giving my Introduction. That assumed that people would actually show up and I would be able to give an introduction. Well, the weekend turned out to be one of the most fun, complete, and enjoyable three days we have spent anywhere of late. Gathering for meals, walking the streets of Cherry Creek en masse (it was 50 degrees yesterday, its 18 today!) in shirt sleeves, and basically passing up no opportunities for a laugh, we rolled into Monday night at the Mizel Center for Arts. 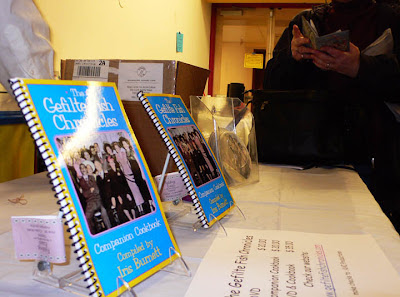 The Companion Cook Book for sale
(and check our website: GefiltefishChronicles.com )
The parking lot was full at 6 when we pulled in and I thought “wow” this is some crowd. I hadn’t realized that in addition to the film fest, there were other lectures, gym activities, and a myriad other events: in fact the only folks in the theater were a half dozen cousins. High anxiety. Well, they brought a nice table of noshes out – pita, humus, falafel, and the high school Klezmer band struck up, and by 6:30 I started to believe that there might be at least as many NON family members as there were family. Then, out of the blue, the doors seem to open and in spilled people in twos and threes, and by 7 pm, the 300 seat auditorium was nearly full. 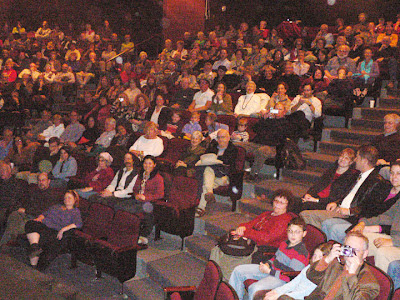 Full House at the Mizel Center
Iris and I were introduced, and asked to say a few words. My own grandfather, LH Burnett, who I wish I’d had more time to spend with (he died when I was 13) would always begin a toast – and there were plenty of those – with “I would be unmindful of my obligations if on this auspicious occasion, I didn’t say but a few words.” Well, I did say a few words, and more than that, gazed out over the chock-a-block theater and realized that all these folks were here to see OUR film. I even shot a picture to remember what that full house looked like. How cool. Please God, let them understand it, let them feel it, let them enjoy it. The applause was genuine. The laughs heart-felt.

At the end of the projection, at least a dozen people said to me “it made me laugh, and it made me cry…” which, if that doesn’t sum up what family is all about, I don’t know what does. Iris wrote a companion cookbook called “The Gefilte Fish Chronicles Companion Cookbook” (we didn’t spend any money market testing the name!) Both the DVD and the Cookbook are available on the www.GefilteFishChronicles.com website (we didn’t spend any money market testing that name either), and sold nearly two dozen DVD/book packages to cholent- starved Denverites. It was a wonderful couple of days in which a lot of new friends were made. Now that we have done the World Premiere, I guess it’s time to think more locally. As things progress, and we appear in other festivals, and possibly on broadcast TV, we’ll let you know about it on the Blob. Everyone needs at least one chance in their life to hock fish for and hour by hand, or lift a 30 pound vat of stew. We’re just sayin… David
Posted by Iris&David at 11:56 PM

Congratulations to both of you on the successful effort. At the risk of sounding poetic, there would be no fruits of your labour, had you not sown the garden..And David..you were the one who told me when success does arrive at my door, it's a great feeling. Still working on it..

Walter: the only things i have learned: It's never too early to start, and it's never too late to start. Hang in there amigo. The garden grows.
d

wow is amazing how many people went there, I want to have a family that big, amazing story, wonderful

It was an incredible experience to watch TGFC the first time, and I now watch it every Lent, and at least four times during the year, too, as I'm a very proud owner of the DVD, and will soon have the cookbook in my kitchen! Thank you all so much, God's blessings.