There were 280 people in the audience. Thirty of them were us, but that still means that 250 people came to see the World Premiere of “The Gefilte Fish Chronicles.” There were a few technical difficulties and with each, I squeezed David’s hand harder. I had been holding it since we made our way from the introduction on the stage, to our seats. The film hesitated twice, we held our breath until it started again. There were a few dropped lines. We looked around. No one seemed to have noticed. The audience laughed in places we never noticed were funny and they cried along with us when they realized 6 of the eight Dubroff siblings were gone. (“They liked it, they really liked it.”) They even bought cookbooks and DVD’s. It was a wonderful finale to a terrific weekend. 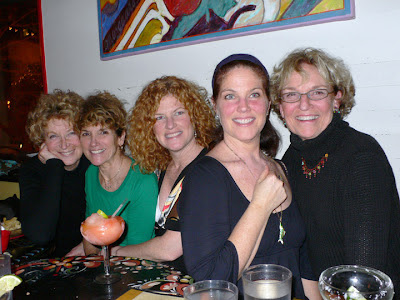 Honey, Iris, Tracey, Micki, and Rosalie, the 'cousins'
We flew from Jordan Kai Burnett’s 21st birthday party in Boston, to Denver on Saturday. Rosalie, and Dickie (from NJ), Honey, (upstate NY) Tracy (Marshfield Ma.), and Karen (NJ), were already there. Some of the clan was gathering for the public unveiling of our family Passover. We checked into the hotel and made our way to the Rio Grande, a noisy Mexican restaurant where we thought we were going to eat. Honey met us at the door and announced that a dear friend of hers had joined us and she wanted us to meet. It turned out that the dear friend was my df, not hers. My college pal, Leslie Tunick and her husband Bill had arrived a day early for the kick off barbecue. This was not unusual for Leslie who smart and talented as she is—and she really is, often used to forget things. For example, on the day we graduated from school, Tunick and her folks (all three of them packed into the front seat of her father’s Caddy) were halfway back from Boston to NY, when she screamed that they had to stop the car because all her clothes were still in the closet at the dorm. Her premature arrival was a joyous mistake for all of us because we got to spend the next three days with Leslie as a new part of the family. And as a bonus, she brought us home made Mandelbrot (a Jewish cookie eaten with tea or coffee). That recipe will be in the next printing of the ‘Gefilte Fish Chronicles Companion Cookbook.” 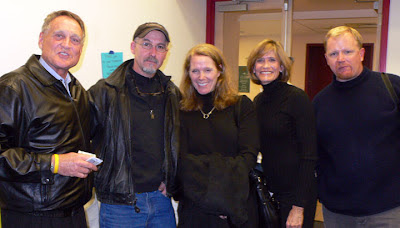 Rick, Jeffrey, Kerry, Janice and Chris (an out of town group need always be in company of a local... sort of )
It was late and the 11 of us (who had been herded onto our own private balcony) had reached the point where we were past hungry. However, a few quesadillas and mega numbers of Margarita’s, were consumed. It was just fun for all of us to be together, even if we were draped over the rest of the restaurant. 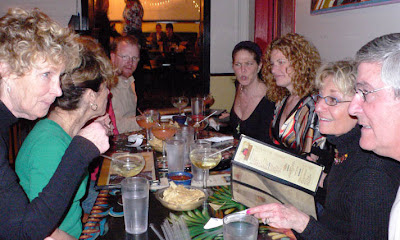 Margarita ville, Denver Rio Grande style
We decided not to have breakfast on Sunday because we were still reeling from the mega-Margaritas. But lunch was on the schedule and The Chop House seemed a good choice for a little protein. Lunch was our second activity of the day. First, since David had left his jacket and heavy vest in Boston, we had to buy substitute apparel. We went to Macy’s in the Cherry Creek Mall. Ro had been there the day before and remembered there was a sale. And did we make a killing. A Calvin Klein jacket for 50% off with an additional 50% off, , in good Dubroff fashion, Ro had a coupon for another 20%. Around 11:00 we got a call from Rick and Janice, friends who had traveled from Salt Lake for the big show. We invited them to meet us for lunch. At the same time Kerry text messaged to say she was in Denver. This was a big deal, first because she had flown in from New York and second because text messaging doesn’t come easy to either of us – don’t any of you think it must be an age thing. Kerry took a cab over. We drank bloody Mary’s, ate great food, laughed without limit, sang happy birthday to Rob (he was a total stranger) and went back to the hotel to rest up for the dinner barbecue at Micki’s.

Rick & Janice Bennion (SLC), Sue Taha (DEN) and "us" (no fixed address)
Some family and friends had already started to party by the time we arrived on Cherry Street. Micki, Chris, Finn, and Tanner, live in Denver, as do Shannon, Connor and Lindsey. Adam, Karen and Jack, came from Ridgeway, Colorado. Leslie and Bill came back from Boulder on the right night, Chuck and Eileen landed from Arizona, Kat and Bill our Virginia friends, came with their 2 friends from Denver. And the most fantastic surprise was that my brother appeared from Seattle. It was yet another fabulous evening with all the friends mixing, chatting, and getting to know this large nutty family about whom they had heard so much.
Needless to say, the next day started out with another meal, breakfast, this time at a place called Snooze. It was maybe the best breakfast I have ever had. My meal was crispy shredded potatoes covered with three different cheeses, scallions and poached eggs. They did not spare the butter. The meal was a treat exceeded only by another reunion. This time with a high school friend I had not seen in over 40 years. Talk about 2 degrees of separation – and I don’t mean 6. Here’s how it happened. Chuck was exercising one morning when he met a beautiful woman named Tommy. They chatted a bit and she confessed she was from New Jersey. He asked where. She said a small town he had never heard of. He said he had family in NJ. She said, Boonton. He said, that’s where my family is from. It turned out that Tommy Kaplan (in high school, Noreen Thompson), was someone with whom I had been friends. They became friends and when Chuck told the Kaplan’s about the event they decided to participate.

We finished breakfast and set out to explore a little of Denver with Rick and Janice in their rented Chevy. Denver was designed on a grid so it’s supposed to be easy to negotiate. This was not the case in the Bennion mobile. We never went from point A to point B without first going to K,P, R, U, X, and Z. We spent so much time being lost that we were amazed when we actually found intended location. (But we did discover an excellent photo gallery called M in north Cherry Creek). And speaking of found, there were a few instances when the hotel lost the little Chevy. We thought it was probably because none of the valets wanted to drive it. Anyway, while there was an ongoing, noticeable, shortage of ‘right direction’ there was no shortage of merriment.

It was a weekend filled with just one laugh after the other which culminated in the grand opening of the world premiere of the documentary David and I have been working on for three years, “The Gefilte Fish Chronicles”. The night of the event we were invited to introduce the movie—which David did with great eloquence. The only sadness for us was that Mom and Aunt Peppy are both not feeling well and they couldn’t be with us to revel in their very special day. David has been blobbing about it tonight so rather than get repetitious, read his blob for the rest of the story. It is well worth the time. We’re just sayin...Iris
Posted by Iris&David at 10:20 AM

All my best wishes, and successes for your project! I will check out your site soon..Some projects take time and effort, and evidently you and David are living proof!

I watched this on PBS last night and just wanted to tell you how much I loved it. The sisters are just beautiful and hilarious. I'd never seen a Passover dinner being prepared before and couldn't believe the work! But the love and laughter seemed to make it more of a party than a chore. Thank you for sharing your beautiful family with me.