The Egg and I

For years it was nearly impossible for me to make a hard boiled egg. This was despite the fact the egg is one of my favorite foods and I attempted to make them frequently. My friend Sidney makes the perfect egg. She times it for six minutes once it starts to boil. Then she thrusts it in cold water and voila, the white is solid and the yellow just a touch soft. Since the 80’s I have attempted to duplicate her egg and maybe once every 6 or 7 eggs it would work. My past history with the little chicken products was not one of success. No matter how long I boiled the eggs they refused to harden. I mean, I boiled some eggs for an hour and a half and they were still disgustingly runny. I even made Sidney, who accused me of not turning on the stove and not timing properly, watch me try to do it and even she was flabbergasted. Was it a personal thing? Did the eggs not like me? Were they just one, in a number of items that tried to frustrate me to death? Who knows. I just thank God that things changed, because now I make the best scrambled, fried, and hard boiled eggs, plain or for salad, of anyone I know – except Sidney.

Before she died, Aunt Helene was the champion best scrambled egg maker. Of course it was before she died, who knows what she’s cooking now. Her recipe was simple. Eggs beaten with a fork, a little (very Little) milk, salt and white pepper. I discovered the secret of excellence is in the act of scrambling. You put a little butter in the pan (non stick is good) let them cook for a minute until they take form, and then, with a wooden spoon, slowly move the eggs around until they are at the desired consistency. (Now is the time to add a bit of cheese for 'cheesy eggs' if you like). If you mush them right from the start they have no personality. And as I learned from my attempts at hard boiled, eggs have a mind of their own. 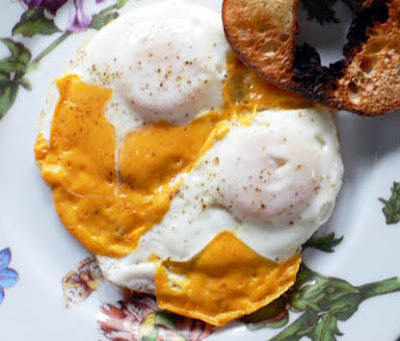 Two perfect basted eggs with cheese
The best fried eggs I make are actually basted. You put a little butter into a pan that shapes two eggs like they were auditioning for a TV commercial. Season them with salt and pepper. If you like cheese grate some on the top. Then cover them and cook them until they are the consistency you like. (Editor's Note: The moisture under the top cooks the yolks to a perfect blue/grey. Unbeatable! -- David) You don’t have to chance breaking the yolks and winding up with a big unattractive mess.

Egg salad and tuna fish are among the foods we considered family staples. We are, however, egg and tuna purists. That means nothing green should ever be mixed in. The secret to excellent egg salad is not to overcook the eggs and to mix in the Hellmann’s mayonnaise when the eggs are still warm – not hot. (Tuna should be drained, cold and never mixed in a blender. FYI, we eat tuna with cream cheese on a toasted bagel. Don't say yech until you've tried it. ). And don’t cheat on the mayo. If you don’t use a good mayo it’s like using the wrong wine for cooking only worse. People always say, “it doesn’t matter what kind of wine you use for cooking — the alcohol cooks out and what’s left always tastes the same.” This is simply not true. If the wine is spoiled and has turned to vinegar maybe you can use it in a salad. But there’s a reason why chicken Marsala and beef Bourguignon only tastes like what they’re supposed to be if you avoid wine that tastes like last years kosher Passover product.

And speaking of cheese, (OK maybe we weren’t speaking and it was only a mention but this is an important addition), we love cheese in almost any version; on a plate, in a salad, on a cracker, melted, grated, on a sandwich, combined with truffles, cranberry and a variety of molds which turn it bleu. But some of the ways we most enjoy it is mixed with grits and couscous – not at the same time. We cook up some grits (say it with a Southern accent). We use Quick not Instant grits. I add a cheese with little personality after they have cooked for 5-7 minutes--cheddar or even soy cheese if you’re dieting. I also add just a little cream to the grits and cook for another minute. I usually serve them with fried/basted eggs on the top. The cheese couscous are best with chicken or a lighter fare.

Back to eggs. My one disappointment in the category of creative egg preparation is that I am not great at making one of my favorite types of egg dishes, not because of the egg but because of the sauce. Eggs Benedict — although I prefer them Florentine. (That’s with spinach). My Hollandaise is only OK. But it takes too much time, and is not easily perfected.

The thing I most like about an egg is its versatility. It can be breakfast, lunch, or dinner, and need never be prepared twice in the same way (unless you really LIKE one). It is high in protein and low in calories. Maybe it contains a little too much cholesterol but maybe there are mouse droppings in candy other than See’s. Yes, there is a story here. When Barbara Dixon was a little girl her mother told her that other than See’s all candy contained mouse droppings – so she never had a Snickers or M&M’s. She also never had hotdogs or a baloney sandwich and she is still a wonderful, well adjusted person. And is there a point? Absolutely not, it just sounded funny to me. Don’t the maybes drive you nuts? We always say you can do or eat anything in moderation and it won’t hurt you. So a few eggs scattered throughout your diet are not a bad thing as long as they are delicious.
We’re just sayin...Iris
Posted by Iris&David at 11:08 AM