As one of the several thousands of Americans who has appeared on Jeopardy in the era of Alex Trebek, I can say with pleasure that even though I didn't actually win any cash moolah, that the experience is one you can dine out on, or at the very least be plied with call-shot drinks at the bar, for hours... weeks, and perhaps even years. A friend recently sent out a note about the piece on the Gulf Coast which is currently on the news stands, and called me "our unassuming friend..." I know it was meant as a compliment, and it's surely taken that way, for I have spent most of my adult life trying to blend in during those professional situations where you get more work done if they DON"T notice you, than if they do. Diane Dewhurst, a wonderful woman who was once Senator Geo. Mitchell's Press person once introduced me as "David Burnett, the guy who walks into a room and disappears..." Now THAT was a compliment. Our search for the rare unguarded, candid moment is something that often forces us to try and meld into the background so that the subject in question, whether it be the President or Ayatollah Khomeini (I have more "candid" pictures of the latter than the former)just forgets altogether that we're breathing the same air. My mom was once furtootzed (a Yiddishesque expression meaning slightly annoyed, not REALLY annoyed, but annoyed enough to let you know that she was annoyed) when I was described as having had a "middle class" upbringing in Salt Lake City. You know how Sam Levensen and millions of others have said "...we didn't know we were poor...", well I think either my mom didn't know we were middle class ... OR ... I didn't know we were UPPER-middle class. It's one of those ongoing stratification issues that has no actual resolution. But now that I have decided to shed my unassuming attitude, you should all be warned that it can get ugly. I mean, if I start Assuming, all manner of things can happen. Like, talking sassy back to Alex Trebek...! Demanding that the poppy seed rolls be refilled at the Rascal House deli in Miami. Sadly, I cannot go on the show again.. they have a One Time rule, so instead of another shot at the big ring, I'll have to hone my skills for Wheel of Fortune, where I vow NEVER to buy a Vowel, or.. 'Who Wants to be a Millionaire?'

Yet the one thing about Jeopardy we all know about is that one category which can be just about anything.. you know. .like this Blob:

Pot Pourri... a collection of un-associated items, whose random selection has no obvious meaning.

So in that vein, I'll just share a couple of weird moments. Im in Florida this week shooting pictures, and the chap who booked my car did so with Thrifty (why do I always want to say that with a really bad Harry Benson-esque Scottish brogue?.. as in "Ay, laddie, that Ford Fiesta, tis a loovly loovly seh o' wheels... trooly!") 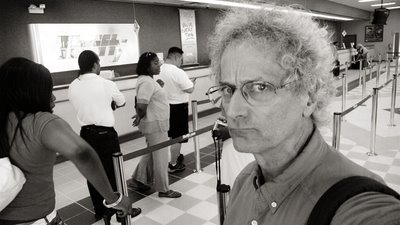 Me, in LINE (not On Line) at Thrifty
It's 'off site', like, albeit, Hertz, but it means you schlep your gear to the bus.. on the bus.. to the site, and THEN still have to wait in line. You remember LINES.. those are the things which unassuming people immediately race over to and stand in. In case there is, let's say, a sale on Polo shirts or a slab of porterhouse steak fell off a truck, and is being sold for a dollar a pound. Lines. Queues. So I had to stand in line (sorry NY'ers.. not ON line).. while the line slowly shrunk and I got my car. But it was sort of like one more of those times when the unassuming photographer's car was booked by a guy who, you think?.. never travels. He works in Travel but doesn't spend THAT much time being unassuming in a rental car line. Ok, they upgraded me, I have a closable trunk, and it looks like I'm very assuming in my 300 Chrysler. I assume so.

The next moment of unAssumption was arriving in my room of the hotel where I had let the PR folks know that there would be a very Assuming photographer arriving that evening. Moments after I checked in a rap on the door yielded a gent with a tray of Chocolate covered strawberries. Wow, not bad. I needed some fruit. Or I assumed I did. So I ate three of them, getting nearly all the fruit intake I needed that day, and about 14 times the amount of chocolate that I needed. 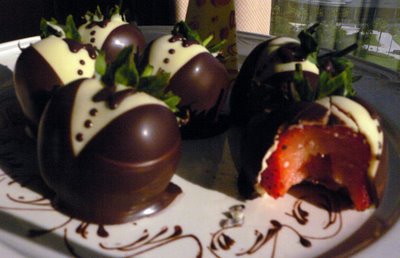 The Surgeon General has advised that consumption of Choc. Strawberries can be really Good. Not Good FOR You. Just Good.

Then tonight, I returned to my room, only to find a message light on. I was expecting no messages. In the age of cell fones, you just never hear your in-room phone ring anymore right? Well here is the message:

"Brian, this is Joyce. For your information, Mohammed needs to be off next Wednesday. I don't know if you've done the schedule yet, but remember that Hercules is off until Tuesday."


Most of you would assume this was meant for someone else. Even I did briefly. Then I pondered the fact that it could be a coded message. Any place with a Mohammed and a Hercules working the same day, is a place where you could also run into a Sheena, a Cassandra, or even a Melody. $700 in useless Jeopardy (Home Version) chips for the person who gives us the best re-Interpretation of the above message. We're just sayin David
Posted by Iris&David at 11:31 PM

And that's no sour grapes.

I'll see that Brian gets the message.

You know you've hit the "Assuming" level when you get an upgrade from Thrifty AND chocolate covered strawberries from associates of Hercules and Mohammed in the same day! You must have felt like Paris Hilton---in fact, you might wanna check for hidden cameras in your room.

Perhaps you could post a picture of you, Hercules AND Mohmammed out for a spin in your Chrysler 3000. Now THAT would be a picture for the magazine! And I'm sure you can find those two in Orlando. I suppose the question is: who will drive, who will ride shotgun and who is in the backseat?