C'mon Baby Light My Fire.. or Someone's Fire at least 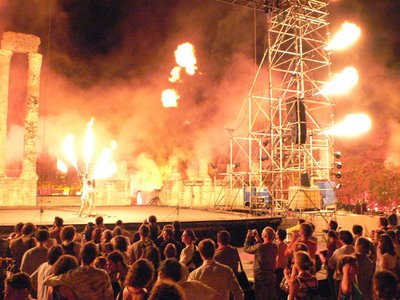 
Tonight was one of those evenings which make event planners happy. As a brief aside, the Arles photo festival is rolling onwards, and at this half way point, I must say that I have met a lot of editors, book publishers, gallery owners, and curators, and even a few other photographers. I suppose it’s a little like the Congoleum convention in Oshkosh if you happen to be in the vinyl flooring business. You look forward to meeting all your fellow vinyl-ites for a few days a year and talk over the state of the business, see what others have come up with, try and adjust your own sights once you have a balance about what else is out there in the world. It takes a rather odd turn sometimes: today at 5, there was an “English Tea Party” near the pool, with semi actual scones, butter (no clotted cream I’m afraid) and jams of all sorts. The jams looked better than they tasted, and I tried, the new svelte me, a half of a half of a half a scone. 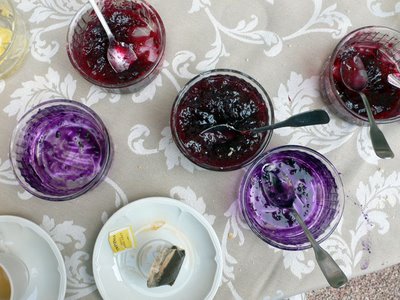 Just enough for the taste. (Note to Starbucks: you really don’t need either that big a scone, nor that big a coffee.) Ah, if we could only learn these things from the French. The tea party itself was one of those events that you have absolutely no idea why it happened, other than to try and give a few people a taste of jams they may not yet be familiar with. I’m still trying to understand what they said, and English is (sort of) my first language.

The big hit of the night was the show celebrating the VU agency – 20 years on, and to do so, they were able to obtain the services of the American singer Patti Smith. I wasn’t ever terribly fond of her in the 80s (she was popular when VU was formed in ’86), but I was a good listener tonight, and enjoyed her songs nearly as much as her rants. She had a couple of prize moments, asking a typically clueless cameraman who arrived with a video camera right in front of her, blocking her view of the audience, to move a little. The guy didn’t seem to get it, even after (as a third attempt) she asked him to shove the camera up his ass. 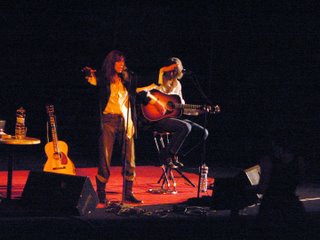 It was one of those prize “I can say whatever I want because I have the mike…” moments. Otherwise, her songs seem to parallel to an uncanny degree the pictures which were shown: lots of what one might call “arty”… read that as distressed textures, or blurry, or a combination thereof, (is “conceptual” a better word?) In any case, as often happens, some work you like, some you’re not crazy about, and some you could just leave in a brown paper bag, sitting in an empty seat on an E train. But I’ll give Patty credit, she really tried to evoke a lot of the same emotions which the pictures did. That is not an easy task. 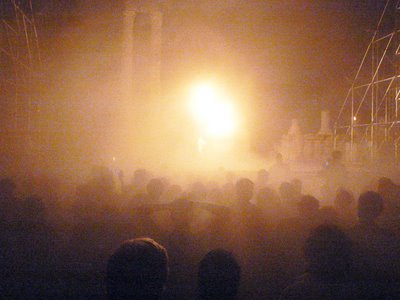 After the show of pictures and music ended, a wonderful group called Theatre F which is one guy on stage, and a former NASA Technician/Army Artillery specialist (or he should be if he isn’t) put on a wonderful ten minute pyrotechnic/music finale. They have set up a number (maybe 25) nozzles around the stage, which, like the fountains they have started building for kids.. the ones where the water leaps from fountain to fountain in big wet drops.. starts shooting out gobs of fire. When the curtain was still up, you could only see a little of the flames, and at that moment it looked like a fire eater near the movie ticket line.. the guy who takes in some solvent and blows it thru a flame, making the “I EAT FIRE” thing really stand out. Once the curtain was dropped, there was a musician, plucking at an instrument which looked a little like a harp, and sounded like and electric harp, and which must have been keyed to the jets. As he played a note, stuff would squirt out of the ports, and flame up, and with such precision that you can really make a firestorm of music… the notes each relate to particular jets, and they do a great job of letting the formations of flames show up. You feel the heat. You hear the music. It was good fun. Because tonight was also the France-Portugal football match (semi final – World Cup), everything was pushed back an hour to allow for the game to take place. Thousands of townsfolk gathered in the main squares and inside cafes to watch. Happily for them, France won, and the evening carried on in a spirit of victory, and the feeling that yes, France would win it again. (Big game is this Sunday vs. Italy).

A final beer in the square and I’m off to bed. Let the record show that the beer at the Grand Hotel Nord Pinus (yeah that’s what it sounds like -- I think it has something to do with Pine trees, but don’t quote me on that), which must get its beer from Yankee Stadium, was one of those “we can charge anything we want because we’re the only place open at this hour” adventures. First of all, a 25 cl bottle of Kronenburg --- not a great beer in the first place – was five Euros. Yes, it nearly reached the rapacious rates of Major League baseball who think nothing of charging you 5 or 6 or 7 times their cost for a beer. Well, somehow the folks at Budweiser in St. Louis, who make that barely drinkable golden colored water, managed to become the sole BEER sponsor at the World Cup in Germany. (I hear they may actually sell some Dortmunder Pils in a few places). It’s eco-diplomacy like that which gives America a far greater black-eye than just about anything the government does. Bud in Germany? It was like the time in 1984 when some genius in the Kodak marketing dept. said, “Nah… we don’t need to cough up money for sponsorship for the Olympics in Los Angeles…” which permitted Fuji to enter the market, give away TONS of free film, and have a very slick, easy, and profitable entry into the U S pro film market. Some one at St Pauli Girl dropped the baton on that one. 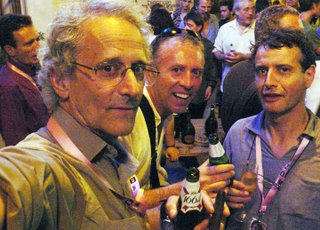 Well, it's only 9pm on the East coast..
Well, I had my Kronenbourg, and was happy to have a little something to drink, warm and expensive though it was. It was nearly my only vice of the day (1/8th of a scone?). Well, to bed, now at 330am, and on to another day of photo mania.
Posted by Iris&David at 4:59 AM