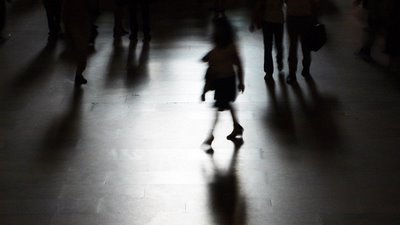 Grand Central in all its New York glory


New Yorkers tend to look straight ahead. No, really, they do. Stand on the corner of 47th and 6th Avenue, and look in any direction. Those eyes will bear down on you as they scoot by, like the air intakes on a jet fighter, they are always looking forward. If they were ray-guns, those eyes would injure a lot of people. And there would be a lot of burned backs, shoulders, and bums, where the straight-ahead looking eyes/ray guns would be scanning all the time. I suppose it makes for effcient motoring when you're hopping about the city on your feet, but it does have a few draw backs. I mean, true, true, there is nothing like being able to do that amazing Pedestrian dance - the hop-to steps that let you merge inside a crowd of fifty, with another crowd of fifty going the opposite direction, and no one gets hurt by it. It's quite an amazing series of feats when you realize how few pedestrian-pedestrian accidents there are each day, given the chances for an unfortunate encounter in the millions. They have done all kinds of amazing psych tests, filmed busy intersections with high-speed cameras, and analysed it all frame-by-frame, to see just how we each do the escape and evade thing as we head on down the road.

But as I said, it comes at a price. New York, the singular town that it is, has a charm and magnetism which perhaps only the visually attuned can appreciate. The city was made by a zillion different architects working on a half zillion plans, the end result of which is that virtually no building is like the one just next to it. Sure, there are townhouses and brownstones which have a lyrical symmetry to them; but in the end, there is much more difference in the beauty of New York than there is in the sameness. Thank God for that, or at least let's thank some happily challenged designers.

This afternoon, when Jordan announced that she had to grab a 6:30 train to Connecticut to meet her pal Mikey, I thought it would make emminent sense to accompany her to the station, and have a real 1940's kind of RR station send off. There were no cabs to be had, and I ended up carrying her bag most of the way, calling upon my experience in travel, to realize that carrying a bag on your head is, half the time, the right way to carry without undue fatigue. You're balanced, you won't tip to one side or the other, and in fact it lets you look straight ahead in that vaunted New York way, letting you thread your tootsies amongst all those people who seem to be bent on being in your way. Thus we ended up at the 6 o'clock hour in the center of New York, that wonderfully baroque hunk o'rock that has been welcoming New Yawkers for decades: Grand Central station. 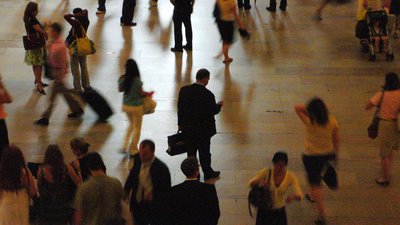 There is always ONE guy on his cellfone, motionless in the crowd
And particularly in the afternoon, the way light hits the windows and the shadows it creates on the floor is something quite special. We ended up with a smart decision: Martinis at Charlie Palmers cafe overlooking the grand Hall. The martinis were very New York. Very Straight Ahead, if you know what I mean. Those olives looking at you like a pair of New York eyeballs, gazing straight at you, like a well-intentioned pedestrian. But while the Martini was fun, the view of the station was even better. It required looking DOWN to see it. But over the rail, there was all of New York, moving in randomesque (ok, not random, those folks actually know JUST where they are going) movements, dragging their shadows along with them. It was a visual treat, and I kept leaping to the marble wall, and snapping a few pictures as the shadows and light ebbed, flowed, and did its thing. That, however, didn't prepare me for the treat I got walking out of the cheeseShop/Market (a great market that is, if you recently won a state Lotto) onto Lexington Ave. At 43rd st., looking east, you are looking directly at the UN Secretariat. 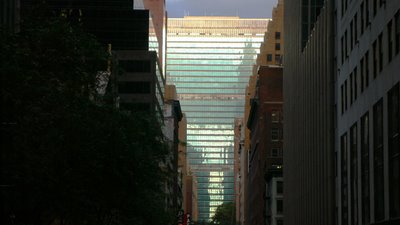 The UN Secretariat on 43rd St.
I'd never seen it look this nice in all my Gotham years. But the emerald green was tingly and rich. So, out came the LX-1. Snap. Snap. Then we started walking up the Avenue (lexington, which was quickly traded in for Third), and one block after the next yielding the most wonderful skyscapes. 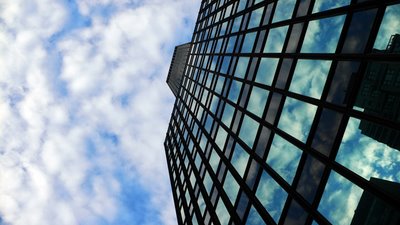 Looking up, I saw one of those great vistas that most straight-ahead New Yorkers probably miss. The sky, and the wonderful way it glistened off the glass of the building on 48th st. Then, a block later, an even better one. Then looking West on 51st, to Iris' favorite building (the ex GE bldg. I think...) 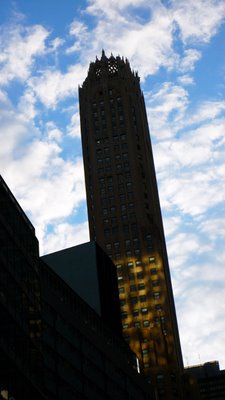 whose towers are worthy of Notre Dame (the Paris one, not South Bend.) 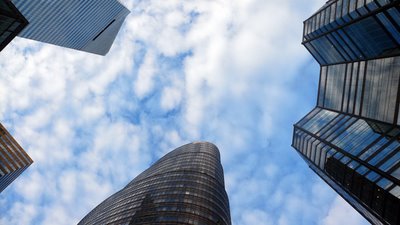 Home - 54th and 3rd.
Then last but not least, the Lipstick Building/Citicorp Center, our block. Bingo, we were home, and having looked up, and looked down, were almost didn't know it was our very own. That can happen when you fail to do your looking the right way. Remember. Get with the program. Look UP! New York!! We're just sayin.

David
Posted by Iris&David at 9:50 PM

I like it! Keep up the good work. Thanks for sharing this wonderful site with us.
»