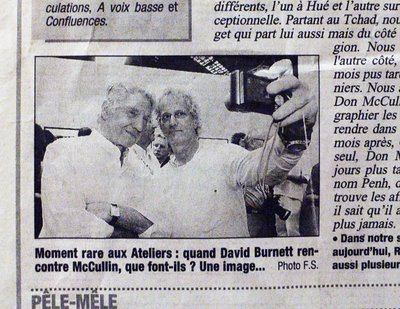 from the feature page of Provence, July 5: Don McCullin & me
When I think about the fact that I have been a photographer for forty years (well, “paid” for 39 of them) it makes me wonder what happened to a lot of those years in between. Well, it’s not like I have vast periods of blackout, or wonder where the hell I was in September, 1973 (France, NY, Argentina, Chile) – most of that stuff I do remember reasonably well, and in most cases, I have a vague idea who I was with. I suppose the really scary thing is that when I see a lot of those people, it takes me some time to figure out who they are. Or, how come their kids (I didn’t even know they HAD kids) are already 15 or 18 or 20. I’m sure many of them feel the same way about me, and would be surprised to meet Jordan Kai Burnett and realize they didn’t even know she was born, let alone that she can hit all the high notes in “Defying Gravity.” (Editors note: she is currently working at, and can be heard at “Ellen’s Stardust Diner” – 7th Ave. and 51st st. in New York.) The charm of the realization of what has happened in those years is part of what has drawn me this week to Arles in Provence, Southern France. (Note – the French don’t actually say “Southern France”.. it’s a Salt Lake term meaning “less than a half hour drive from Marseille.”) 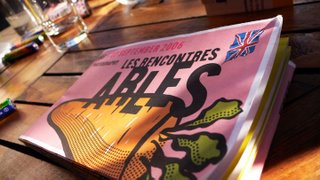 This week is the 37th Rencontres de la Photo – an annual gathering of photography, much of it artistic in nature, but most having to do with some element of documentary, photojournalism or the press. There are some 40 shows present in a number of aging Gallic structures. My show is in a wonderful space, the former “garage” buildings of the national railroad: large expansive spaces, with high ceilings, and which are very conducive to showing off photographs. Many of the exhibits are by friends, some of whom I haven’t seen in years; others by young photographers whose names are new to me. (In the states, you can very quickly, too quickly, become isolated from what is happening in the rest of the photographic world, and a trip like this is a good way to get your head back into the “real world” of what is out there.) My show consists of two groups of pictures: “Coup d’Etat in Chile, 1973”, and “French Politics 1974-1981.” The first is a selection of pictures made in the days just after the coup which overthrew, and killed, Salvador Allende. An armed forces coup, with complicity from the Nixon Administration (this was one of Kissinger’s proudest moments, I think), and which was an enormous story in Europe, while in the states it was treated like just another Latino General grabbing power. Some of my photos became icons for the story, and were the first time I became known to European picture editors. It was a rather scary time (I was arrested twice, both times in extremely unpleasant conditions), but as I had only left Vietnam ten months before, I felt I was ready to jump on the story. The French political work included Giscard (starting with his campaign in 1974), Mitterrand, and Chirac, who was then the Mayor of Paris, but plotting his eventual run at the Presidency. The pictures have a kind of intimacy which I’m sad to say, is very hard to find today. My mentor at the time, and the reason I am in France this week was a French photojournalist (and filmmaker, and perhaps most of all, thinker) named Raymond Depardon. He turns 64 this week, and it always seemed like the five years between us was much more. He was always an adult, and I mostly felt like the kid-just-out-of-school. Though raised on a farm in Beaujolais, and entering the world of photography at 16, I cannot think of anyone in the world of photography who is a deeper thinker, and whose ideas of photography and the press, and our role in it, have had a more profound impression on me. 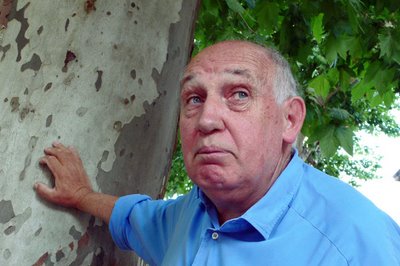 Raymond Depardon - one of the greats

I was lucky to meet Raymond in 1970 in Peru (a terrible earthquake in the Yungay) just after he had helped found Gamma, the Parisian photo agency. We met later in Vietnam in ’72, and in 1973, when Gamma split into two agencies, he invited me to work with them in the states. LIFE had just closed a few months before, and I truly felt like my career was over. Done. Finished. The chance to work with Gamma was really an opportunity to be reborn in the business. I jumped at it, and more importantly, had many chances, while crashing at Raymond’s Paris apartment, to understand what made him tick, and to try and be a beneficiary of his singular incisive, thoughtful ideas about culture, photography, and news. This year, Raymond was asked to be the guest curator for the Arles photo festival, and in addition to the 30+ others, included a group he called “Companions along the way..”, photographers who worked with him, by him, along side him in those early years. I am one of those, the one he calls, “… the most French of the American photographers..” a sobriquet of which I am very proud.

I just finished doing a live radio broadcast with Jean Gaumy and Dominique Isserman, two other “companions”, and managed to stumble through the half hour with only one English interruption. 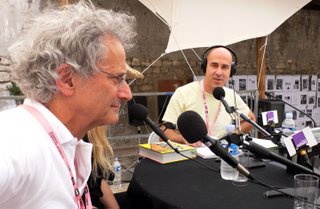 My French does seem to return once my feet are back on Gallic soil, and while it will never be classic Sartres or Camus, it might just be good enough for Jerry Lewis. 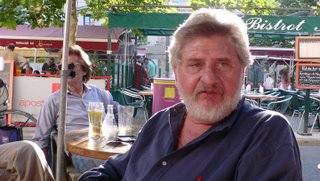 Among the attendees, former Time photographer Dirck Halstead (of digitaljournalist.org) who is always comfortable when he can have a "Bistrot" sign over his shoulder.

Watching your friends age can be problematic. Not everyone is successful at it. Not everyone makes the transitions happily or with a gusto you might once have attributed to them. But there is a certain satisfaction in the feeling that what we have all done, as photographers to describe the world around us to those who will follow, will live on, and perhaps fill in a few gaps in the written histories, about what made the world what it was. Even now I find the ability be to turned on by pictures creates an energy which I adore. I wish I were a better writer. I wish I were a better blobber. But for now, we’ll use a few pictures to help fill in the gaps.
Posted by Iris&David at 7:29 AM