A New York Kind of Day

It was a New York kind of day and it was terrific. I got up, read the Friday NY Times, so I could see what was going on out and about, then I went to the gym and worked out. Well worked out is a bit of an overstatement, I was out is a more accurate description. Then I came back to the apartment and wrote for a few hours. The weather was good, although a bit warm so I decided to have a NY adventure. 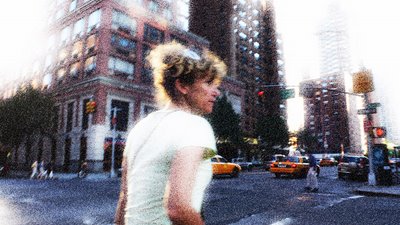 I started to walk uptown. I have this great compass which my friend Liz gave me before she moved to Florida. What a bummer, but I did get a terrific gift. It tells you which way is Uptown, Downtown, Eastside, Westside—that’s all the directions, but at least when I get out of the subway I know which way to walk once I figure out where I want to go. Anyway, I got to about 56th street, a mere two blocks from the apartment and I turned west. I walked for about ½ a block and there was chaos on the sidewalk. There seemed to be a convention for guys who sell knockoff purses. There were about fifty men with bedspreads filled with fake Lauren, Dior, Kate Spade, and whatever designer women are buying. But there were no women buying. These guys were just standing around blocking the sidewalk and gabbing about their bags. At first I thought it was like a corner in Virginia where all the illegal aliens gather and wait for all the illegal contractors to hire them for a day to do illegal work—but this was not the case. They were just standing around.

Suddenly it occurred to me to go to China town. I was right near the #6 train stop on 59th street so I hopped on and made my way downtown. Canal Street is one of the most colorful streets in NY. The section I like best has little stores with chachkas, bags, shoes, sunglasses watches, and jewelry. It’s actually like being in China. Hardly anyone speaks English but you can still negotiate a price for a product with a great many hand and head movements. Joyce Kravitz is the best and funniest negotiator I know. Unfortunately she lives in Philadelphia so I had to brave the hand and head movements myself. I began to walk north toward Broadway -- another downtown favorite – and was approached by a young woman who wanted to know if I wanted to buy a good bag. Her English was negligible but I understood that she was offering me something I couldn’t find in the shops.

I have seen these women often but I have never followed any of them and to tell the truth I was curious about where they would take me and what they had to offer. It was like being in the movie “Love With the Proper Stranger”. I don’t know if you’ve seen the movie but there is a scene where Natalie Wood and Steve McQueen are going to find an illegal abortion giver—not a doctor, but probably an immigrant. Anyway, they have instructions about how to get to the abortion place — not a clinic. They walk two blocks this way, three blocks that way, upstairs, downstairs and into a back alley. It is so terrible that she decides to have the baby. Little did she know about terrible. But that’s not the point. I followed this woman three blocks east, two blocks south, into an alley, up two flights of stairs and into a room where there were no windows, but a few purses. As we were making the journey up the last staircase it occurred to me that I could really be in danger. No one, including me, knew where I was. I could have been robbed or killed or forced to buy bad merchandise. It was so terrible I couldn’t have purchased anything even if I’d liked the stuff—which I didn’t. It was, by the way, exactly the same crap that was in the stores.

Exhausted and glad I hadn’t had the abortion, oops, I mean bought any bags, I returned to my own neighborhood. I got off the train and met a lovely sidewalk guy selling terrific skirts. He was very entertaining and I cannot pass up a bargain or a street show. There were three other women also making purchases and they convinced me that the skirt I liked was not too young for me. Of course, one of the women was a size 16 trying to fit into a size 2 but that was not my problem, so I bought the skirt—which Jordan will love. Then I ran into my regular street vendor who was selling sunglasses for $5. Of course I bought a pair. Happy from my NY adventure I went to Au Bon Pain where I made my usual iced coffee, paid my usual server, and had my usual argument with the manager because they never have Splenda or straws tall enough for the large drink. When I finished the coffee I went to Tasti D Lite and had my usual small dish of fake ice cream. It was comfortable and familiar. Just another day in the big apple—but it made me smile. We’re just sayin… Iris

My part of the day included the usual things which I find amusing: a libation whose tipping points intersect at the perfect place: great taste, creamy satinesque texture, and under four and a half bucks. Todays’ version (Sam Adams Summer Ale) was found at Johnny’s BBQ on 77th and 2nd Avenue in Manhattan (“….Put some South in Yo’ Mouth!”). Teamed with a plate of Brisket Tips (they’re tips the same way that chop sticks are used to chop), it makes for a great excuse to just sit somewhere in the city for a couple of hours, occasionally looking at one of the many flat panel TVs to see if the Yanks are beating the Sox (White version, which they did…) The city has a million diversions. Earlier in the day we had skirted one of them, a Street Fair on Madison Avenue. Normally we try and visit them on our own terms (i.e. looking for something in particular.. not just doing the walk from pita stand to pita stand, carmel corn to carmel corn, Chinese massage to Chinese massage), but today we walked the whole thing, hoping to find some elusive, neo-Olde Something. 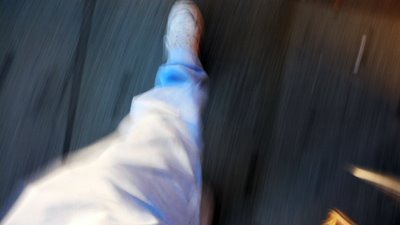 There was a woman, very inventive, who took liquor bottles, heated them to 3 zillion degrees, and flattened them in the shape of a cheese platter. Sounds goofy, but it’s a nice Craft thing, and rare amongst the all too frequently found trite and usual stuff. The street fairs, which have mostly Undedicated New Yorkers attending.. the Real people seem to avoid them..(does that make me UnReal?) have become, like most “marketing opportunities”, just predictable and uninteresting. How many lemonade stands do we really need? Well.. maybe every other block when its 90+ degrees, but I wish the folks would be more creative. And of course it is the embodiment of what Dan Burstein (author and smart person) used to call the “Third World at Home:” virtually no one except the guy with the Imported Cannolis (from Brooklyn!) was born here. Many Chinese, many Koreans, many Indians, some Latinos. One wonders, with all the young Chinese sellers, many with the semi-fixed 1000 yard stare of bewilderment, are they – Falun Gong, or some other group which finds people, brings them in to work street fairs and who knows what else, and they end up trying to sell you metallic teeth cleaners, iPod cases, and really chintzy jewelry -- “Everything $2”. I know that if I ended up in Beijing of Mumbai, selling whoKnowsWhat to the locals, I would have a thousand Kilometer stare as I stood there, waiting for something untoward to happen. But New York remains an adventure, and when you can get sushi and barbeque on the same block, you know you’re not in Kansas anymore. The walk home included passing a few classic New York windows: a t-shirt which proclaims the ultimate in New York Laisser Faire, 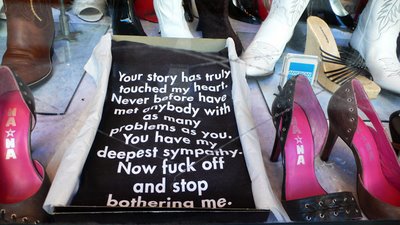 And a window of a 2nd Avenue grilled Chicken place, whose menu status might give you pause to wonder whether they were really capable of serving you something which you actually Wanted to Eat. 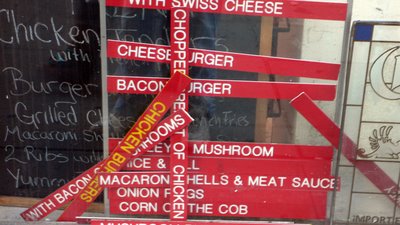 But it’s New York. Your feet move, the city swirls, and the only thing you know for sure is that whatever today was, there is a chance that tomorrow will top it. Like Ed Koch used to say, “How’m I doin?” Well New York, just fine I’d say. Just fine. We’re just sayin. David
Posted by Iris&David at 8:33 PM