Food for the Asking

On a lighter note. Numbers of our friends have asked us for restaurant suggestions in New York. We do eat out quite a bit and we like a variety of food. Burnett likes to go to the seediest place he can find and later comment that it was really terrible but he had to try it. This having to eat seedy is a consequence of being a fairly gutsy photojournalist who thought that part of his mystique was eating in crummy places and surviving. I, on the other hand camped out across the country in 1972 and feel like I paid my “dining survival” dues. Actually I loved the adventure but David refuses to believe I slept in a tent and used outhouses for two months. Of course the best camping I ever experienced was on St Johns in the Virgin Island. Tina and Mark, the X and myself stayed in a cement tent in the National Park. A cement tent has two sides that are screen and two sides that are cement. I guess if they called them screen tents it would indicate no privacy but to tell you the truth, a cement tent didn't sound so sexy either. Anyway, it was fabulous. Lot's of yellow birds, hummingbirds, drugs and a calymba foir evening serenades. There was an outhouse but it had toilets and showers. And there were a number of great places to eat, including the buffet at the hotel attached to the campsite.
We hiked and snorkeled and laughed nonstop for a week. It would have been great to be there with Burnett but he was off eating in some seedy place in Indo China.

This will probably more than one blob. We have a few favorite spots in the neighborhood. Our neighborhood is the east side between Lexington and First and 51st and 62nd. This is not what most New Yorkers consider a neighborhood. Most people think that to go more than five blocks in unnecessary. When you come from a place where you have to drive to get anywhere you want to be, you are less reluctant to venture beyond five blocks. And our favorite delivery chicken place (Chicken Kitchen) is on 62nd-which is why I went that far. Here's a fact unknown to most. When I grow up I want to own a flaming chicken truck. This is not a joke. If you have ever been to a market in Tuscany or Umbria you will know what I mean. There are these big trucks which have a side that lifts up revealing a wall of flame and skewers barbequing garlic rosemary chickens. Some are whole and some are halved and shmushed like they've been run over by the truck. There is no chicken I have ever tasted that compare to those which have been roasted on that truck. So I want to own a truck and I will park it in different places (probably vacation places) and sell chickens to people whose aim is to enjoy themselves.

But that's not in our neighborhood. The place we frequent most often is a diner on 1st and 53rd. It's called the Madison but it's not on Madison. I guess I just said that. They have a terrific breakfast, excellent sandwiches and the dinners are amazing. Like a New Jersey diner, you get the main course, accompanied by soup or salad, dinner rolls, vegetables and potato. It's enough for 4 people and it's very good. If I were a critic I guess I would say, the chopped sirloin, which upon request will be served with sautéed mushrooms and onions, is seared perfectly on the outside and flavorful on the inside. The vegetables, never over done, seem fresh and delightfully crisp. But I'm not, so suffice to say-It's clean, moderately priced, we really like it. In addition it's a great place to meet someone for a meal because the tables are spaced nicely and they don't rush you.

Speaking of diners. Jordan is a singing waitress at Ellen's Stardust Diner on 51st and Broadway. This is a place I would recommend for families and for great entertainment with a meal. We had heard that the food was only OK but we had salads and sandwiches when we went and they were better than average. And of course you are entertained while you eat. The servers serve and sing at the same time. So there you are getting your burger when all of a sudden your waitperson bursts into a lively rendition of something from “Wicked”, and leaps up on to the middle strip-it is only a thin wall between tables-then finishes your order. I was actually not allowed to go but my new wonderful friend Howard, his son Jonathan and my pal Marian snuck in. We sat down before Jordan had a chance to banish us to the Cosi across the street. And she seemed to have a good time despite our presence. So if you're in New York and looking for a good time try Ellen's. 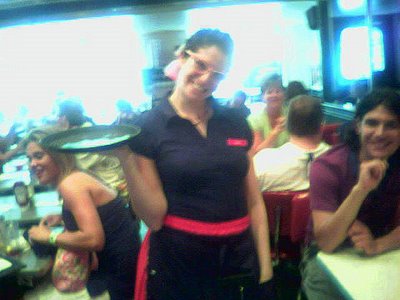 Jordan at Ellen's on 51st st.
I think tomorrow I'll talk about our favorite Asian places. Let me say right up front that there is no place better than Mark's Duck House in Arlington, Va. We have been hard pressed to find an adequate substitute. Marks is the kind of place that got rave reviews in the Washington Post on Sunday and the following Monday was closed for renovations. When we asked him why he would do that, wasn't he concerned about losing business, he only laughed and said he had his regular customers and that was enough-he didn't care about new business. But that's another city and another story. We're Just Sayin…Iris
Posted by Iris&David at 10:33 PM

Very best site. Keep working. Will return in the near future.
»