Eventually, you find a Connection

We never thought it was possible but my mother agreed to try to use a computer. She ‘s not on line but she loves to play solitaire and poker and that’s what she’s doing. We are hoping it becomes a substitute for all the TV she watches — and maybe she’ll become a professional gambler and make a fortune if we ever connect her to the internet. We were in New Jersey for a wedding and in between the ceremony and the reception we went to Best Buy and made the purchase. The computer has nothing to do with my blob about past connections but I wanted to share some positive news about my mother.

The young woman who got married was one of Seth’s closest friends. She is six months his senior and her sister is six months his junior. They grew up in Boonton, next door to mom. So although he didn’t go to school with them, on vacations and in the summer he was sandwiched between these two fabulously beautiful, smart young women. 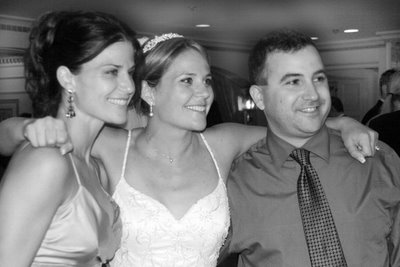 Brenda, Tina, and Seth
And because Ron and Elvira (the parents) had no sons, Seth was like their son. And he did what sons do — he drove them nuts. But it was always a genuinely loving nuts. In fact, Seth walked Elvira down the aisle. He was thrilled to be a part of the celebration and truly moved that Elvira chose him to do those honors. 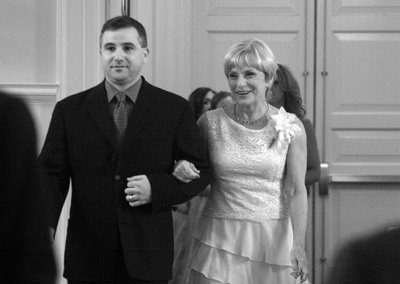 The wedding was lovely. Lots of great food, a good band and many people from the past. I hadn’t seen Roger Levine for years. He was the eldest of three boys. His middle brother married Gail, one of my closest friends from high school. She was such a good friend that when I left for college she accompanied my mother for the drive. She was dating a sailor whose ship happened to be docked in Boston. On the night before I checked into my dorm, Gail and I went out with her boyfriend and his friend, who gave me a hickey. It was the end of summer and very hot but I wore turtle necks for the first two weeks of school. Roger’s younger brother, David was my best pal. He was the guy who knew how to dance when the other boys wouldn’t. At 5’ 7” he was on the basketball team and although not the tallest, he was the spirit of the team. At 9 or 10 we cut Hebrew School to go to Dover and see friends, and at 14 he was the shoulder I cried on when my first date stood me up for a dance. David was killed in a car accident when he was 17.
There had been a snow storm and although the roads were cleared they were still icy. There were three boys in the car when it went into a spin. The other boys were fine but in 1962 no one wore seatbelts and David was thrown from the car and broke his neck.

I was in Madison, Wisconsin with Tina when I got the call. I don’t remember how his girlfriend Joyce, (then and now still one of my dearest friends), broke the news but I was devastated. When you are a teenager there are always difficult times but you never think you or your friends are going to die. At least we didn’t. We thought we would all live forever. That’s why we drank and drove, made other reckless decisions, and often did incredibly stupid things. But David died. I didn’t breathe for the rest of the time I was in Wisconsin. There was a great deal of crying and some sharing of memories, and of course there was the drama about sharing the tragedy with strangers, but I couldn’t take a deep breath. When I flew home my friends picked me up and we went directly to the cemetery.

Since David had only been dead for a week, there was no grave marking. My pals had an idea about where to go but it never occurred to us to ask anyone about the location of the grave. We were all still raw from the loss and simply couldn’t ask for David Levine’s grave. How could David have a grave? We wandered around for about 20 minutes and then found what appeared to be a recently dug pile of dirt that we figured must be David’s. We stood in front of it but didn’t know what to do. Should we pray? Should we cry? Should we throw ourselves on to the dirt and scream about the injustice? That’s what I wanted to do, but instead we just stood there until Ronnie suggested it was time to go. We drove away feeling the extraordinary pain of teenage loss. I went back once after they erected a headstone. It seemed such a lonely place for such a social full-of-life person, who was always surrounded by a million friends. But David is still in my heart and I think about him every time I hear a song we danced to or on Yom Kippur when I include him in my prayers for those people closest to you who have died.

Last year my brother’s best friend Bruno died because his heart valve exploded. He was only 53 and like David full of life and spark. Bruno’s sister is married to Roger Levine, David’s brother. I hadn’t seen Maria for 10 years so it was nice to catch up at the wedding. I told her how sad I was about losing Bruno and how blessed we all were to have known him.

“Yes we were, he was my baby brother”, she said. “And now he’s resting next to Roger’s baby brother. And I think it’s good that they’re not alone.” 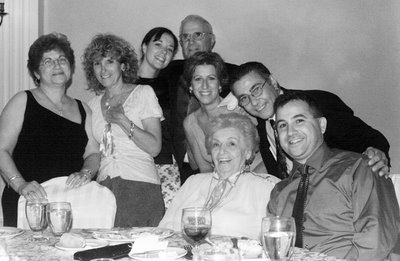 Maria, Iris & family at the wedding
It’s been over forty years since we lost David. Whenever I think of him I picture him laughing, dancing, on the basketball court, or until last weekend all alone in that cemetery. For whatever reason, I feel better that Bruno is there with him. I know it’s silly but David was always happiest when he was with a friend. We’re just sayin…Iris
Posted by Iris&David at 12:43 PM

I like it! Keep up the good work. Thanks for sharing this wonderful site with us.
»