Jordan and I are trying to have dinner with our friend Deborah S Craig on Thursday nights. Deborah is the over achieving Asian character in the play “Spelling Bee.” She and Jordan have been friends for about 7 or eight years. They met when they performed in a showcase production of “King Island Christmas.” You mount a showcase when you hope to find backers for a play. They never did, but it was a great experience for Jords because she got to work with professional musicians, producers, and performers. She also worked with Paolo Montalban who among other shows, was the Prince in the Disney movie “Cinderella.” They became quick friends and although we don’t have dinner with him every week, he did buy Jordan expensive moisturizer when he visited us in Washington.

We met Deborah after the show last Thursday and went to Ruby Foo’s. This is one of my least favorite Asian restaurants because the food is only OK and it is overpriced. Other people, like Deborah, like it and I am but one opinion. I drank Sake, Jordan had dessert and Deborah had what looked like pretty good soup and Sushi. While she was eating I noticed that she was not using her chopsticks as skillfully as I expected. (Remember I said she is the over achieving Asian Character). So I asked her when she started using chop sticks. I always think this generation of young people is far more experienced than we were. Jordan has been using them since she was two. In fact, Anna who owned the Hunan Number One, another of our favorites in Arlington, gave them to her and they were connected on top so she could use them and not feel left out. By the time she was three she used regular sticks. Deborah started using them when she was twenty one. I should have known since her Anglo parents raised her in the middle of nowhere Florida and there probably were no Korean restaurants. This has nothing to do with my promised blob about our favorite Asian places to eat.

A few years ago we went to see “Urinetown”. A hilarious show which is no longer in NY but it is traveling, so don’t miss it. It was pouring when we got out and we wanted to eat at somewhere close by. We went to a place called Ollies. I had seen it a million times but had never gone in because I thought it was too touristy. “Oh No” my friend Marion informed me, “Are you in for a treat.” And was she ever right. It is a fabulous place. They serve enormous bowls of delicious soup with any kind of noodle, any kind of roasted meat and a wonderful won ton. They have dim sum which they serve on carts on weekends and the rest of the food is amazing. Fresh vegetables, good curry and they are not afraid to spice. In December we called to see if they would deliver to the East side, and we’re not sure they had ever done it before, but now when we call they know just who we are.

The Great New York Noodle Town, is in China town two blocks south of Canal on bowery. It is tiny. They don’t take reservations but so few people know about it (except Ed Koch) that a table is never a problem. The noodles are good but the roasted meats and vegetables are fabulous. If you’ve never been to Hong Kong this is a good introduction and not a bad substitute.

Then we like Sounkyo Shushi. David says he’s not sure they would withstand repeat visits from UN Personnel but it is a good place and very reasonable. We have had sushi and we have had noodle dishes. They do have a little problem getting themselves together but after a few minutes they usually can figure out how to deliver the food and drinks in some kind of order. It is on 51st and first.

One of our favorite places is Blue Chili. It is on the west side on 51st right off 8th. This is a pan Asian place. We have eaten there any number of times because they always have something you want to eat. The sushi is fresh, the noodles are never mushy and the main dishes are always a creative combination of flavors – and it’s reasonably priced. 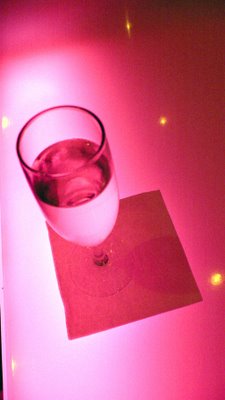 A two-fer-one cocktail, at the bar


They also have a happy hour with bar drinks which are pretty cheap. So you sit at the bar for a while and drink then go to your table and have dinner. 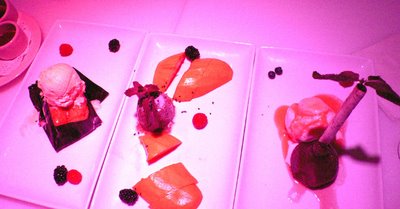 Dessert is a dream at Blue Chili
It’s a New York thing.

When you live in New York you are spoiled by delivery. My friend Sid used to say that everything you want is no more than 1/2 block away and if God forbid it's not, you can order in. Everyone delivers and nothing takes more than 20 minutes. Last night when I called a pasta place we order from frequently, they apologized because it was going to take 20 minutes. There is nothing in Virginia that takes less then 50 minutes—so we are spoiled. Anyway, I will continue to report on food worth eating but tomorrow I will probably blob about being all alone in a movie theater on Saturday. We’re just saying…
Posted by Iris&David at 8:28 PM

My Thai friend, Oi, always told me a fork is more efficient.

Interesting website with a lot of resources and detailed explanations.
»