I’m on a plane to Texas (the promise of barbecue?) for a story for a couple of days. I’m absolutely dead tired. Not in the usual kind of tired. But yesterday was a long day. Iris and I had driven up to the city (four very snappy hours when you listen to a swell book on tape or, book on CD as most of them are now) on Sunday, as part of our car balancing act. She needed to be in the city, but didn’t need the car. I had a semi-free Sunday (no NFL, not that I really care, but no college hockey either – which I like to imagine I care about) so we cruised on up 95. I must say, it was rather like the Spin and Marty show. You probably have to be able to buy Senior Movie tickets to know who they are. As I recall – there were ongoing ‘serial’ type stories, usually starring Mousketeers, to keep us little darlings pegged to Channel 2 in that sweetspot of time before dinner. Spin and Marty was the story of a young well-to-do-city boy (Master Martin, as he was addressed by his butler) who spends the summer at a boys dude ranch/camp, and becomes friends with Spin (played by Tim Considine.) We loved that show, and especially the idea that a nerdy city rich kid would bring his butler with him to camp. The butler had his own quarters, and provided major comic relief. It was kind of an insult to call another kid “Master Martin” in the 4th grade: it implied he was spoiled, stingy, and someone who was a prime target to be sent out on a snipe hunt. Anyway, Sunday I had my Master Martin moment --- all four hours of it – riding in the back seat of the Sophie-Mobile (our precious Cadillac, with a wheel base as big as Lake Erie) while Iris drove. It wasn’t that I was being “Master Martin-ish” in any excessive way, I was simply behind on my compiling of pictures for the annual White House News Photographers’s Assn. annual contest (“the Eyes of History”) and I needed some editing time. So, in that very 21st century manner, Iris drove, and I sat splayed out in the back seat, my black jacket over my head to shield he sun from the laptop screen, while a pair of portable hard drives helped me find all those pesky pictures from the last year (street scenes in Havana, pole vaulting in Beijing, the Obama clan having a “cat’s meow” time enjoying Election night, and Hillary, caught in a perfect moment of tromphe l’oiel at a Mexican café in Dallas.) which I needed to catalogue for the contest. The really tough part was sorting through and trying to figure [this is the hard part about being a photographer—being tough on yourself, and not just liking a picture because you enjoyed the moment you shot it] which were the pictures which go beyond that personal experience, and might even mean something to people who were NOT with you at the time of creation. Doing all that while listening to a terrific murder mystery on the cd player, and calculating just when would we pass by the Delaware Memorial Cracker Barrel (as opposed to the Cal Ripken one, or the McGuire Air Force Base one) to stop for breakfast. You see, it’s not quite as simple as “jump in the car, motor towards Gotham.”

I spent some of that drive trying not to collapse from fatigue on my laptop. For whatever reason, and I doubt we’ll ever really know, I kept having that “wake up at 3 a.m. and stare at the ceiling” intervention on Saturday night. At least twice that I know of. That’s the worst: when you know you’ve had one of those dreams, you wake up, and slowly go back to sleep, only to be greeted by the same damn dream again. And this is what it was all about. The scenario: I was with two other photographers in New York, and something newsy happened (dreams are so great that way.. it was all ‘generic’ no specific event) in California, so we raced with all our gear to the airport to grab the one plane which, after a six hour flight, would JUST get us landed in time, and let us cover the event. And of course the razzing thing for me was that, as sometimes happens in real life, I couldn’t find my camera bag. The plane was loading, my friends were laden with Domke bags and cameras. Me? I was trying to figure out W H E R E I’d left it. In which subway station or closet, or school room, or taxi trunk. The clock was ticking, and whatever speed I was trying to solve that problem, it was about two ticks slow of what was needed. I ended up standing at the gate, with a frustrating view of a plane backing out swirling within my insomniac soul. Well, it’s not as if we never actually leave a bag behind or a lens we’ve put down for a moment. In fact, way too often I’ll be just getting back to the car, putting things into the trunk, and nagged by that feeling that “it just feels a little bit light… a little under weight.” That’s when you realize that what you did was leave a bag (which equals the approximate weight of how ‘light’ the gear felt) leaning against a riser or in a campaign bus. There is nothing in this world that makes you feel as stupid as leaving a bag behind. Well, possibly locking the car keys in the car. But short of that, it’s all about your memory and your feeling of being in charge of your work, your life. In my dreams I kept thinking that I could still make that flight. But I didn’t know WHERE I’d left the bag. That’s the real issue in reality. Trying to remember where you left it: it should be obvious, but it’s not. You move around a good deal, you grab bags onto your shoulder, and dump them with regularity as you work your way through a shooting situation. But in the dream, it was futile. They say “resistance” is futile, but finding your lost camera bag in a dream, now that is seriously futile. Futility is the destroyer of good sleep. You awaken, you may or may not be sweaty or feel your heart racing. But it becomes so intense that fighting that feeling of futility, even as you sleep, can be tiring. I know that Sunday night, I felt almost spent. We photographers spend a lot of time figuring out what has happened with our luggage – both lost and recovered - over the years. 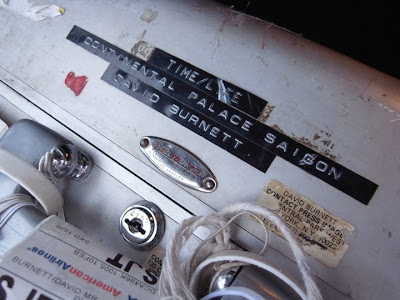 I still have a 40 year old Halliburton aluminum case – the big one – the “two suiter” which doesn’t carry suits. It still has the original plastic labels proclaiming “Time-Life / Continental Palace Saigon” from my very first trip to Viet Nam in 1970. Nowdays I carry my Speed Graphic kit in there, or lights, or, in the days when film was supreme and x-rays weren’t a problem, bags of Kodachrome. This week, in Texas, I brought the Speed Graphic with me in that Halliburton. This wonderfully indestructible case, which has been to 50 or 60 countries, and been in the company of Popes and Presidents, has been sprung out of shape, locks busted, dropped from baggage holds, and even claimed twice on insurance. But it keeps on ticking. Like me, it wants to keep flying, keep traveling, keep seeing the world, carrying my gear, and I’m sure if it were able to write me a note, it would simply say something like “please, don’t leave me behind.” I’m sure many of you have little tricks you use to keep track of things. Maybe you’ll share them with me. I guess I don’t mind missing some imagined event on the west coast, but I fear that someday I may unintentionally abandon my dear friend the Halli case. It just wouldn’t be fair. We’re just sayin’… David
Posted by Iris&David at 12:27 AM

If you ever need a replacement, I have a couple of two suiters covered with decals (Continental Palace in Saigon and Taj Mahal Palace in Bombay, now Mumbai, being two of the 20 or 30)...those 20 or 30 are probably the same as yours...

They even have dents and broken locks and hinges...no one would ever know the difference except the false bottoms used to smuggle drugs and gold...

I'm so glad that YOU have this dream. It's replaced the one where I go to the college class I've forgotten entirely about, not attended all semester and now it's final exam time. I call it the "photo op dream," as it always seems set at some half-baked presidential event with bad position for us and me either with a lost bag, or broken equipment or both.

But, about that Halliburton, where do you get the latches replaced? I'm on my second set, which gave out in China (naturally -- nowhere near anyone who could really fix it) and so I've been unable to use the precious bags since...

hi BKY.. i got in touch with halliburton
http://www.zerohalliburton.com/index.jsp

and they were able to send me the clasps i needed for a pilot case.. these cases will never die.. disappear, ? maybe. die? never

good luck.. it is that dream of dreams, isnt it.. (like the college paper you never turned in, destined to ruin your life)

I've got a "Weekender" or "Two-Suiter" also. Mine's also from the 60's and is on its' way to becoming my case for cameras and lenses. I didn't have a lockset or keys for mine when I found it in a thrift store for $10.00, about 8 years ago.

I guess the company is now called just "Zero" and is based, at last contact, in Salt Lake City, Utah.

The cases truly are "indestructible."