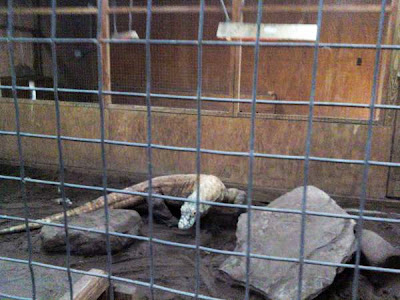 A highly predictable Komodo Dragon
There are many new rules at US Airways. “It costs $17.00 to check a bag,” the embarrassed fight checker inner told me. “You have got to be kidding,” I replied because really, what else was there to say. Unfortunately, he was not kidding and I reluctantly turned over me credit card. “I’ll take it inside”, he said. “Then it will only cost you $15.” I think I must have said “thank you, but you’re kidding,” again. But when I turned and spied the additional information, I was too blind with rage to remember anything. The new cost for one bags is $17, two is $27 and three is $102. Yes, $102. That sounds a bit excessive,” I said, “You might as well buy the plane.” “I wish I could” he said.

After we got through security (not easy because in addition to removing shoes, taking off coats, taking computers out of bags, change out of pockets, this group determined that we had to run naked around the magnetometer three times—OK I’m exaggerating but not much), we then proceeded, in an orderly fashion, to gate B6. Once there we were informed that, if you didn’t pay the $17 to check baggage, you would have to gate check anything you couldn’t eat in one sitting (over 22 inches). “I know it used to be 26 inches” she explained, “But it’s a weight vs oil issue.”

What oil issue? What weight issue? Why don’t they weigh the people instead of the bags and just have bigger people pay a charge. Oh, and how come when oil process went up so did the cost of airfare but when it came down—the airlines didn’t lower their prices.

Anyway, she was at a loss and said that because it was Feb 1 and it was kind of a surprise New Rule—she wouldn’t charge for putting the bags below. However, she went on with her blabbing about how wonderful the airline was and how gracious they were even to fly us from one destination to the other. It was a no-win and I didn’t pursue the conversation. It was kind of like having a conversation with the idiots from Wall Street who insisted that the only way they could keep those ‘talented’ people who ran the firms into the ground, and their ‘brand’ was to pay them millions of dollars in bonuses. It’s impossible to argue with the ridiculous because you cannot win an argument when all the information is based on false presumption and lies. They count on the inquirer to throw their hands up in defeat or frustration and then they just maintain the status quo.

But this is not what I wanted to blog about. Over the weekend I was at a Public Diplomacy retreat where the goal was to find a way to for the government to actually implement a public diplomacy operation. It was kind of a lions and tigers and bears event on two levels. First of all, it was at White Oaks, the Howard Gilman retreat where they actually have cheetahs and zebras and antelopes (and a few tigers). We took a tour of the jungle beasts before the conference and then faced the human wildlife.

Public diplomacy is not public relations—although there is an element of the latter in the former. Long and complex definition short and for our purposes --It is people to people diplomacy with the goal being to meet American foreign policy goals or improve relations with the rest of the world. You may have noticed that the US has not won any international popularity contests of late. After two 24/7 days. Tara, one of the smartest and most articulate people I know, suggested the way we succeed at making the system work is to weave public diplomacy into the fabric of American Political life. In other words, we need to think about the way we relate to the rest of the world in everything we do—that includes all the foreign policy decisions we make.

It is unclear what will come of our efforts but something surely needs to be done to repair our relationships around the world both in and out of government. I think that part of the problem is that the diplomats who have the power in the State Department put a greater value on political diplomacy than on public diplomacy and that now they are having a crisis in judgment, capability and credibility because what they have learned over the last eight years is that public diplomacy is certainly of equal value if not even more valuable.

Oh and by the way, at the end of the conference an old friend said that of all the wildlife he encountered, I remained the most unpredictable. Wasn’t that a great compliment? We're just sayin'...Iris
Posted by Iris&David at 11:34 AM

We should start by admitting that the grandiose experiment of subsuming the U.S. Information Agency into the mother of all bureaucracies, the State Department, by congressional edict spearheaded by former Senator, now VP, Joe Biden, was a ghastly and costly mistake. However, prospects for this happening are dim given that the mistake was made with the support of Prez Clinton, Secr. of State Madeleine Albright (who rued the decision) and Senator Jesse Helms. Washington does not admit mistakes but change necessitates that the mistakes be admitted before they can be corrected. We have studied the abysmal failure of this experiment through 2 administrations. Now is the time to act.

Amen and let's be hopeful about change