There was an earthquake in Boonton, New Jersey this morning. A most unlikely place for that kind of disaster and yet, it happened. David says it’s because too many people ate the fabulous pasta and maybe too many fagioli bianci beans at the Reservoir Tavern and that set off the rumbling in the ground. Maybe. When I heard the news my first thought was that I hoped Mom’s house was OK. Then I rethought and realized, it’s not our house anymore so I don’t really care. I no longer have to pay any of the utilities, so there was no reason to stress. And speaking of utilities, the cable bill was always an issue because every month they would add some random charge and then I would have to make about a million calls before I got someone to whom I could say, “We have the most basic of services and we shouldn’t be paying more than $15 a month. No one lives there.” It didn’t matter, there were ludicrous charges every month. I’m sure part of it as that the cable company just didn’t want to service anyone who wasn’t paying top dollar – especially the elderly and the poor.

When the British began their conversion from regular (you know – 'analog') to digital they did not assume that people either knew or could afford to deal with the new system. Smartly, they did it region by region, and over a long period of time. They sent an actual human being to every befuddled house to make sure the transition was without problems. And if someone couldn’t afford to buy a new box, they were given one. In the United States, no one comes to your house to do an installation. You are lucky if you can get a call back from a cable company. And now we have learned that the cable companies say, they have run out of the coupons for the cheap boxes. In the United States, it’s all about money and the truth is that they just don’t give a damn. And it’s not a paltry number we’re talking here: it’s estimated that 30 to forty million homes will be affected. 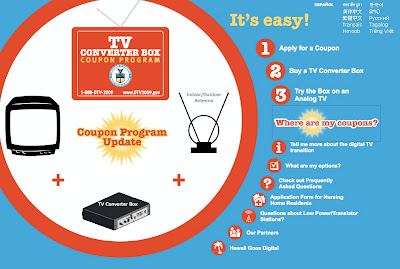 As far as I’m concerned, the real question is why do we need digital television. People who make the TV sets and people who produce the TV shows will tell you that – supposedly -- it looks better. And that is true. It just might look better, but how much better do you need “Two and a Half Men” to look in order to enjoy it? So again I ask, why in the world did we need this transition headache?

It seems obvious that the reason is to make the people who produce shows and TV richer. Now, I’m not against blatant commercialism – just a minute, maybe I am. I remember a few years ago when I was working in TV and we started to discus this new fangled way to view programs. I kept saying, “this will never happen”. People will rise up in anger and refuse to participate by buying a TV set that they don’t need. People will be on the streets protesting this forced expenditure. Everyone loves their TV and their programs but will they invest thousands of dollars to replace their old sets, or will they happily turn over hundreds of dollars a month to a cable company that has total distain for the public – that means as little or service as possible.

My brother lives on a small island off the coast of Seattle. He loves a few TV programs and he watches them through a great deal of fuzz and the constant turning of an antenna. Because his wife thinks TV is a total waste of time. And she didn’t want to spend any money supporting the local cable system. Oh how harsh, you may say, but my niece, having never spent all her waking hours watching crap, is an honors scholarship student at UW. This does not mean that my brother shouldn’t be allowed to watch the paltrey 4 or five shows he likes. But as of June or July or whenever the money mongers insist on the conversion, he will no longer have access to any TV if he can’t find one of those pesky digital boxes. They don’t have cable by choice, but what about the people who would like to watch TV and can’t afford to convert. Who will allow them the access they desire. “They have run out of coupons for the poor”. How do you run out of coupons? Oh you can make it inaccessible – like distribute them by e-mail when you know there are people who can’t afford or don’t know how to use a computer. Or you can have the cable companies actually manage the distribution—for sure it won’t happen if this is the case. But how in the world can “we ran out of coupons”, be a good enough reason not to permit the less fortunate to have access to the program of their viewing choice. And, to put it in the form of a question (thanks, Alex!), who are the numbskulls who came up with this cotton pickin program? We’re just sayin’…. Iris
Posted by Iris&David at 7:02 PM

The government is approaching a slippery slope by allowing this mandate. How long will it be until television is only available in HD? Will we be issued coupons for a tiny, low-end $500-1500 HDTV? Doubt it.

Problem for your brother: apparently, even though, in theory, he ought to be able to watch with his antenna as long as he gets a converter box, digital pictures require stronger signals than analog pictures, so that those people with weak analog signals will get no picture at all with the converter box. Or so I've heard. The only solutions are (1) a much better antenna, like on the roof, (2) the dreaded cable or satellite bill, or (3) get a VCR and have a friend tape the few shows. But that's why the cable companies push DVRs. No portability. Sorry to be the bearer of bad news. (Oh, and the excuse given for the mandate to convert to digital is that digital signals take up much less bandwidth, so that needed bandwidth is freed up for "first responders." I don't know if that's true, but it sounds good.)

Iris -
I love your ire. This "Analog to Duolog" issue may be the next national campaign of mindful resistance. Everything you uttered seemed reasonable - for someone "just sayin." Thanks.

I'm not sure why TV is a gods-given right. Like your sister-in-law (and honor student), I do not watch TV. Neither (since the divorce!) do I own one. And when a friend said to me and my three siblings, "You guys are all so talented in different things," one of my brothers said, "Yeah, none of us watches TV."
http://claudiassurfcity.blogspot.com