The Weight of Arrangements

What goes around, comes around, and in the world of White House photo-ops, while there should be more wiggle room for inventiveness, the weight of arrangements often means that events years apart look quite alike. Yesterday, which arguably was the most difficult day for the new Administration, with the declinations of two appointees because of tax issues, turned into a case in point. I have done a number of those events. A small classroom in a conveniently located school is commandeered by the White House (or a candidate's) advance staff for a drop by, usually to herald the incumbent’s serious commitment to reforming education, and giving our kids a better learning environment. Who could argue with those goals? Other than the possible sticking point of Federal vs. State aid and responsibility (I think “No Child Left Behind” pretty much proves my point – in that even Republican candidates ran away from it as fast as they could last year) we all want not only our own kids, but the kids next door to be well educated, and competitive in the newly challenging world we face. So, if you’re the Advance person (I know this is Iris’ speciality but I’ll give it a go) you find a school, a class, a room, put one or two small chairs in the center of what will be a reading group, and make ready for the VIPS to arrive. Yesterday the President and First Lady dropped in at a magnet school in the District. There was some amusing banter with the kids – and of course one of the little guys said he wants to be President some day, too. And as Art Linkletter reminded us a generation ago, you don’t have to brief the kids. They bring their own moxie to the event. You couldn’t have planned it any better. But last night, while I passed the muted TV, I was struck by an almost haunting moment. Without the banter, the moment seemed to slide back in history, and looked remarkably like that early morning classroom situation in September of 2001, when President Bush was reading “My Pet Goat” to some children, at the moment he was informed about the World Trade Center attacks by Andy Card. I don’t think we should necessarily retire those kind of events from the Presidential Advance filing box of tricks, but sometimes there are sublime undercurrents which resonate with a viewer, though perhaps as a photographer, I might be overly sensative.

What is perhaps more interesting is the fact that if you had just given the daily schedule a quick look, and seen that the main ‘event to cover’ of the day was a visit to a primary school, you might have wondered if it would be worthwhile. I mean, a school visit isn’t a torpedo factory or a visually striking national park. But therein lies one of the truths of good photography. You just never know when that good picture will pop up. We like to think we can suss out when something will be a photo-rich environment or when it will be a dog. But most of those guesses tend to be more wrong than right. The picture from yesterday’s education event, which might be considered taken out of context of interaction with the little tykes, was certainly not the picture either the White House or the Photographer thought they’d end up with when the motorcade left the White House grounds. 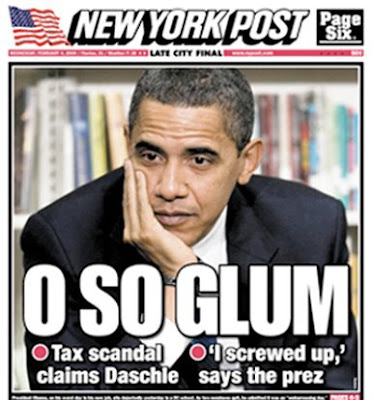 But good photography is about paying attention, and being able to react to those little moments which are subtly contained, beyond the obvious. It’s a good photograph taken by Reuters photographer Larry Downing, a terrific shooter and long time DC veteran, a guy that very little gets by. Larry is always looking, always trying to find that moment that wasn’t supposed to happen. The surprise. It’s what we all strive for in this business, and yet it remains elusive. But the nice thing about it is, when you see it, you know it. So don’t be so quick to pooh-pooh a visit to an old folks home or a trip to the recycling center. You just never know when a good picture might find its way through the noise, and end up on your front page. We’re just sayin’…. David
Posted by Iris&David at 11:34 PM