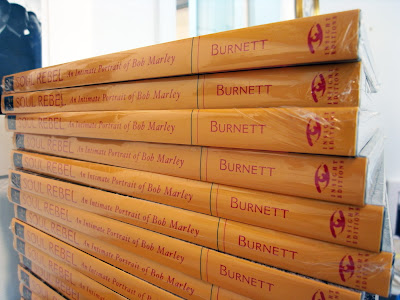 0
the first supply of books arrived today at the Gallery
What an experience this has been. My first ever book (42 years in this business!) came out this week and my first actual show (if you don’t count the lobby of the Colorado College student center.. which I guess you COULD count, but since it was an academic atmosphere and not a “wow, let’s try and sell some prints” atmosphere, I think I sort of wouldn’t count it) of photographs will open next Friday at the Govinda Gallery in Washington DC. It’s one of those amusing stories which seems pretty unlikely, and the closer you get to D-Day, the more unlikely it seems. Regular readers of the blob will know that I had, some 33 years ago, spent time in Jamaica doing a story on the then new (to us) phenomenon of Reggae. We all had heard of Calypso: there wasn’t a kid in the U.S. who spent the decade of the 60s without at least once crying out – probably in the 9th grade gym shower area – “Day – OH!” We really didn’t know what the hell it meant, since none of us had ever loaded bananas onto a Southhampton bound cargo ship, and other than Mr. Bigler, the 8th grade History teacher who wrote down every infraction of school rules that each student committed, neither did we have a clue what a “tally-man” was (as in “Come Mr. Tally Man, Tally me’ bananas...”) So, OK, Calypso was vaguely known, even in Utah. But Reggae,. and the Rastafarian beliefs of many of the most prominent Reggae singers, remained something of a mystery. And remember, this was still decades before you could hope onto your PC, check, out Wikipedia and get at least a cursory understanding of what it was. So, I went with a TIME reporter to Jamaica, and spent a week meeting, interviewing, and photographing many of the better known Reggae artists. That included Bob Marley and the Wailers. We met at his home – Tuff Gong – a complex of several houses, on Hope Road in Kingston. He could not have been more welcoming. We stayed for a couple of hours, and talked about everything from politics, to music, to the culture and “street scene” in Kingston. Near the end of our rendezvous, I asked Bob to grab a guitar, and run past one of my cameras. It was an old Canon P body, the shutter of which has died an early death. So rather than throw it all away, I turned it into a “slit” camera. Where the shutter had been, I put two pieces of black cardboard, just a fraction of a millimeter apart, creating a tiny slit through which a part of an image could pass. This camera was a crude, and I mean very crude, imitation of a race-track finish line camera... the kind that tells you who won the race, and by how much. Essentially, to work, the film must pass by the slit. It doesn’t actually expose it so much as grab the passing image of the subject (you have to have the subject go at a high rate of speed in the opposite direction of the film – the lens turns everything around – and you try and match subject speed to film speed, and lay that image on the film. The better you do it, the sharper the image. But trust me, it seldom works. Even if you have created a fancy electroincally controlled one (like Bill Frakes used to take an amazing picture of Marion Jones at the ... was it 2004 Olympics.. or perhaps 2000 in Sydney.) Mine was much more basic, and I kept asking Bob to Run that way -->... he kept obliging me, and in the end though he probably thought me nuts, ran across in front of my camera nearly a dozen times. From that I got 3 or 4 images that were acceptable. They become very long – two or three, or sometimes four times longer than a single 35mm frame – and then present minor problems in finding scanners that will handle that long a piece of film. But it creates a very particular look and in the show of pictures which we put together for the book and the exhibit this week, there is a really wonderful rendition of that picture: 7’ long, and almost 3 feet high, it really is a PIECE of art. And large like this, it takes on a very different look than simply looking at an 8x10 that you can hold in your hand. 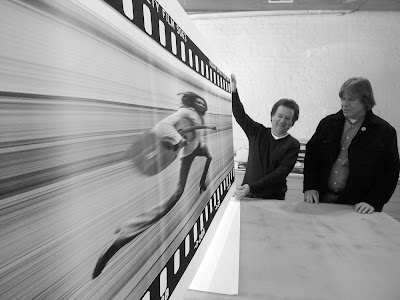 Four years ago, when Jordan was starting Sophomore year at Emerson, on one of our first visits to school in the fall, she excitedly led me down to a friends room in the dorm. And there, on the wall, was a poster of Bob Marley, standing in the yard at Tuff Gong with his guitar. I knew that picture. Jordan, who’d spent that summer working at Contact Press Images in New York, sorting my photographs, knew immediately that it was one of mine: she had spend time organizing the Marley prints. I’m not really sure if the poster company actually licensed that picture from one of our agents, or perhaps just ‘appropriated’ it from a magazine publication. 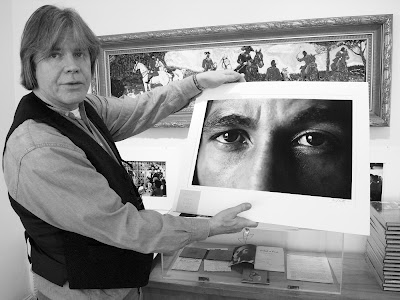 Chris with a print of Bob's eyes...
But more than those details, I was moved by the fact that school kids, all born some 5 years after Bob had died, still felt he was one of their heroes, and someone whose picture, whose image and spirit, they wanted in their own private space. When I thought about that, I realized it was time to do a book. 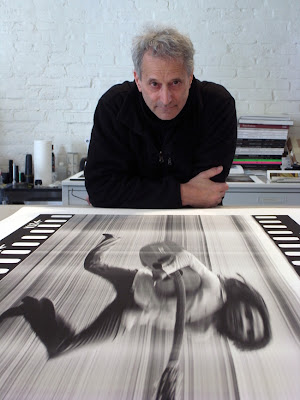 But I still wasn’t sure I had enough for a book (though I also travelled with the band in 1977 for Rolling Stone on their European tour.) I went to see Chris Murray at Govinda, whose first reaction was “where have you been hiding these? 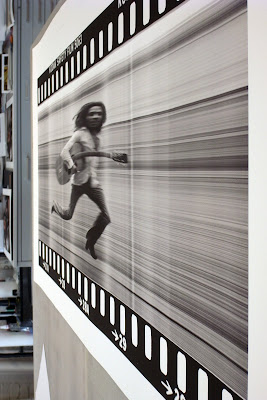 the 7 foot print, waiting to travel to G'town
Well, they weren’t hidden: they were just waiting for a little inspiration. Now, having found that inspiraton, the pictures are fairly just jumpin’ for the walls. A nice big stack of books arrived today at the Gallery. I have been there twice this week to put my penciled in name on the prints. And today we went to see what the big slit-camera print looks like. It kind of looks a little blurry which isnt’ even a little surprising. But the amazing thing is that if you lower your view to be very close to the plane of the image and look at Bob, all of a sudden he is normally proportioned, a case of a camera making something look unnatural, and then minutes later, by changing your perspective, you nearly return it to a normal action shot. David Adamson of Adamson Editions and his crew deserve a shout-out for making the prints look so great. They ll all be on the wall by Wednesday. Pencil in next Friday if you’re going to be in Washington...

Congratulations David... it's about fricken' time.

I've seen a lot of the take, but not the seven foot monster. That beauty is really the icing on the cake. It's the opposite of spilling bong water all over the coffee table, whatever the term is for that.

Congrats man! So surprising that you've never had a show or a book! I guess you have always been too busy. That monster seven footer looks wicked awesome.

Awesome David! Congratulations. How about letting us know where and how to puchase an Autographed copy or two?

To all of you interested in signed prints of the Marley show (and let me just say, the prints look really fantastic. If you ever wanted to be reminded of the joys of a Nikon 55 Micro lens on Tri x, this is it!
Chris Murray at GOVINDA Gallery is handling the sales of the pictures from the show: As of this wednesday or thursday, they will have a gallery of the images on their website, www.govindagallery.com Contact Chris at the gallery: (202) 333-1180 and tell em DB sent ya! thanks...

David,
Writing on Tuesday, Feb. 9, just to say: THE BOOK ARRIVED!! At least, the first copy arrived. Second, signed, is on its way. Here to tell everyone the production values are spectacular, a beautiful tribute to Marley, and many thanks for the beautiful work by you and Govinda Gallery for making this work available to all of us. Congratulations.