History in the Buffer 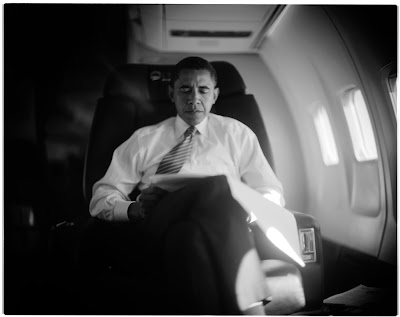 Most photojournalists like to feel that what they do in their work has some historic sense to it. I mean, we're photoJOURNALISTS. We like to think that our pictures are, as we often say, the “first draft of history.” They tell the story without words. It's the kind of communication which relies on the eyes, and the heart, and crosses cultural lines in ways that cause words to stumble. For all our sentiment about being historians, most of the time we focus our lenses on situations, people, events which, while important for a moment or two, might not fall into the category of earthshaking or.... historic. But the other night it was different. 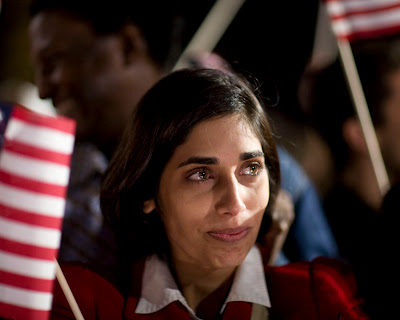 These days political events.... rallies, speeches, town halls, are distinguished by the fact that at the rear of the room there is a big stand for the TV cameras and photographers. Bring your telephoto lenses, please. The platforms are usually a long ways back. Sometimes, if you have good advance people, there is a closer platform for a second TV (the 'cut' camera) crew, and photographers, too, called the Cut Platform. But in the area surrounding the stage, there is a kind of 'no man's land' called the Buffer. Doing just what it says, the buffer gives the organizers a little space between the crowd and the speaker, and avoids unsightly grasping of a candidate by overzealous supporters. But it also provides, more importantly, a space for photographers to work. “Working the Buffer” has become the default space that the travelling photogs usually work from. It creates an odd chemistry. We are usually kneeling in front of the real folks, some of whom have spent hours in the front of the hall, in order to get the best view. And aside from the photographers, they do. But that buffer is a special place. It's not always the best angle, often it just gives you a nostril shot – something few politicians are fond of, though the truth is, most of us aren't that fond of it either. Yet, it is close, it lets you really study the subject, and gives you the one chance at some kind of intimacy in a place which might have tens of thousands in attendance. We are there as something akin to zoo animals. You can get close to us, but it's not advisable to try and pet the animals. They could get ornery. They might be testy. Yet, you are separated by a 'bicycle rack' barrier from the crowds. The one thing you can do is talk. And when you know that at some point you might be blocking a viewer as you attempt to shoot pictures, you try and soothe them all ahead of time, with small talk and chat. And it's usually pretty interesting, since these folks are the ones who are the most committed, the most dedicated supporters of all. So we talk, we chat, we stroll, we move around. We are, after all, just people, with cameras. So there we all were, in the buffer, about twenty of us, Tuesday night in Chicago. 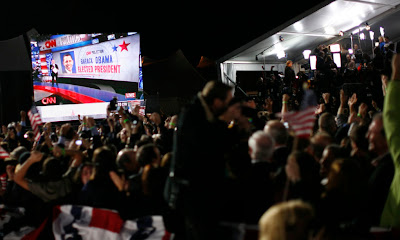 I had been full of trepidation for weeks. I work objectively or at least I try to. I spent time with McCain, Romney, Hillary, and pretty much everyone who ran this year. My mission is to try and make a great picture of whomever I am with. It's not kosher, and I certainly don't subscribe to it, to use your camera as a vicious weapon and try to portray someone as a total buffoon. That doesn't mean that if they act like a buffoon I won't shoot it. But I try and transmit what I see. I want to capture what I see, not necessarily create my own statement without regard to the visual facts of the moment. And when we found ourselves in the Second City, awaiting election night, there was electricity in the air. Sure all the polls had Obama leading. But, conditioned by the past decades electoral mischief, I thought it very possible that there could be enough messing around with results to give McCain the election, if it were close already. And somehow, I felt it would be close, Very close. Perhaps those nagging doubts were the product of a suspicious mind, one that rarely takes what Government officals say as fact. My years in Vietnam did nothing, if not power my view of skepticism. So while I thought there might be some kind of chance he could win, there was a feeling of dread that something untoward would happen. 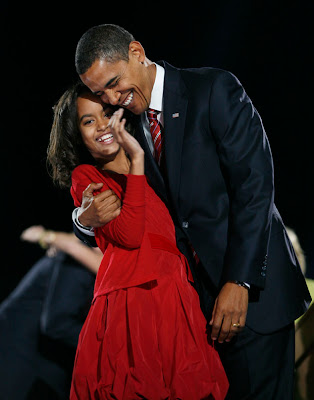 I spent an hour photographing and chatting with those front row folks. Just before ten o'clock, I noticed on the CNN Jumbotron, that we were just 45 seconds away from the next round of Poll closings. “Hmmm,” I thought, “maybe there will be some movement then.” Boy, was there! At the moment of 10 o'clock, the screen changed on the jumbotron to something which came as a shock: “Barack Obama Elected President.” Those four words seemed to bathe over the crowd, which unleashed an unbelievable wave of cheers and screams in return. It had actually happened. Obama had conquered all those terrible stories, all the worries, all the seemingly unmanageable obstacles. The noise seemed to permeate your skin. The vibrations shook you to the ground. Flags, hundreds of them waved, in a splash of red and white. It was a transcendent moment. The world had changed. It truly was historic. For the next hour, we wandered through the buffer, grabbing a picture here or there. Tears were everywhere. So were the smiles of disbelief. And an amazing sense of satisfaction. 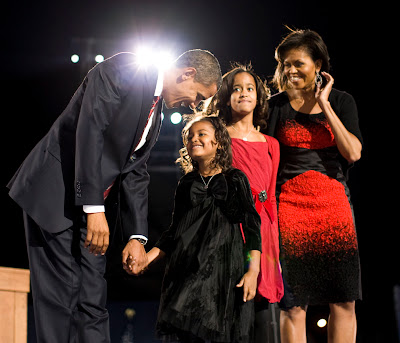 And as we passed each other in the buffer, we, the hard boiled photographers who have seen it all, would grab the arm of a colleague, and in a low conspiratorial voice, designed not to make public our inner feelings, we'd share the sense of amazement, the satisfaction of just being there. The power of knowing that even in the age of Tom Delay, Jack Abramoff, and Larry Craig, that it was possible to find positive surprise in the world of politics. There were knowing looks. We didn't betray our objectivity, but you couldn't possibly be in that crowd of a hundred thousand partisans, all cheering their victory, without simply feeling that to be here, human, and alive was the best thing in the world at that moment. There was a richness to the moment which seemed to far surpass the photographs themselves. That happens sometimes... The opening of the Berlin Wall was a great moment in modern history. Yet for those of us there, the emotion of the moment was so much stronger than the pictures we took. 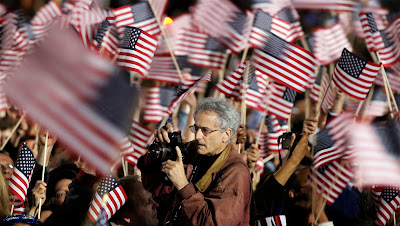 Me, working the 'buffer': by Mike Green/AP
At one moment I stopped and looked over the barrier. A few feet away stood a lovely, elegantly dressed black woman in her 50s. Our eyes met. I held out my hand to her, and she grabbed it. I squeezed; she squeezed back. “I think,” I said, “that you and I are about the same age. And I mean that in the nicest way.” The people around us laughed. “We've been through a LOT.” She nodded in agreement. “And now, we're here. Congratulations to us.” We held our hands together a few more seconds, and then let go. We each kept our smile, happily earned. That shared moment, like dozens of others that night, was like a push-pin to hold the memory up, and keep it close at hand. For once, we really had shared something historic. And you didn't have to be a photographer to taste it. It was there, it was free, it was available. And it was us. We're just sayin'.....David
as always, click on a picture to see full size
Posted by Iris&David at 1:37 AM

Well put,David..and quite well placed..in the buffer.. It's been my own experience that being almost literally atop someone was not the place to be..(to shoot a pic, that is...)
Quite the fine image of you surrounded by the waving flags!

When Brokow called it a visceral shiver racked me. You've filled in the rest.

Yes, David. From my Boonton vigil, I tried to find your familiar face, a friend in the crowd...then I realized that ALL the faces looked familiar, a crowd of friends!
Keep the Faith!

History in the Buffer was a very moving post - thx for letting us share the moment with you.

what a wonderful, wonderful story to read! thoroughly enjoyed this, and thanks for sharing. amazing pictures.

this, is a beautiful sentence, "We each kept our smile, happily earned."
you are a great photographer, I just wish you would write more, just kidding ....

It has been a long time when we could be proud of our democratic country. This election was magical because we all now feel connected to each other. Like you, I was afraid to even think about a true victory. But, they failed to scare us; steal votes; and finally deny us our moment. God Bless America. MC

Very well said, David. Having been in the buffer during the primaries, I envy you being there Tuesday night. Thanks for sharing your thoughts (which are always worthy).

"the emotion of the moment was so much stronger than the pictures we took. "

Why do you think that is David? You and many pros where there and yet the images that I have seen have turned out a bit flat. What was there that photography could not grasp?

David, I had the honor of photographing at an Obama event in Lansing MI this fall and it was a surreal experience. I work for a small town paper part time and took a day off school (which I do full time) and cleared it with all of my professors and went down at 5:00am to try and make it on time to get in line.

I know the feeling, I was in the press area and having to use my telephoto, and photographing amoung guys that worked for GQ (I over heard them) at our future president's rally was simply amazing.

I love the way you look at your photography and your stories are amazing.

Thanks so much for sharing. It was an amazing night, and as a hobbyist photographer, I love hearing the "behind the scenes" discussion - especially for such an amazing night. Love the top pick of BO on the plane.

Just stop parking in my spot!

ps - fab piece. Right up there with your Chinese home movie.

My wife and I, our older daughter, and her friend were far away from the buffer that night, up on the rim of the field, so far from the action that we could barely see the JumboTron, much less the stage. And I had only a noisy G9 point-and-shoot; without an assignment, I wasn't sure how tough security would be (not bad, actually). But what a place to be! Thanks for giving us the view from down front, sir.