Which Would You Choose?

When George Bush and Dick Cheney get together just to shoot the ‘dreck’ (it’s Yiddish and needs no explanation), do you think they say, “gee we really screwed things up”. Probably not. Dick Cheney is too arrogant and George Bush was never good at taking responsibility for anything.

Well just thinking about this is so depressing I cannot bring myself to blob about it right now. So let’s turn to a much more interesting subject. If you had the choice of being a Senator or the Secretary of State, which would you choose. Here’s my pithy analysis. 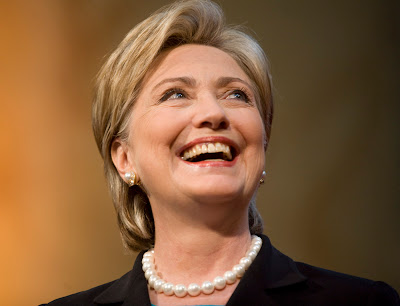 The job Secretary of State takes the ‘Principal’ (that’s Washington talk for the person to whom, as a staffer you cater, and at whose beck and call you always are) to many foreign and exotic lands, where there is excellent shopping. This may not be at the top of any priority list initially, but eventually it is worth consideration because, not only can you buy remarkable products, but you don’t have to declare them at customs. Well, you do have to pay something—just for show—but it isn’t nearly what you would have to fork over as a tourist. As Sec State (that’s an abbreviation without using an acronym, which I hate), you fly on your own plane, which leave from a military base and you don’t have to wait in line or, if you happen to be wearing a bra with wires, be strip searched by some nervous Security Nellie or Ned ...if you get lucky.

When you arrive in the foreign land, you are greeted by your counterpart, (who is a VIP in that country), a pretty child with flowers, and sometimes, if you get really lucky, a military contingent who get all dressed up in uniforms, with guns and they salute with great frequency. Once on the ground, you get to go to breakfasts, lunches, dinners and receptions where you hob nob with the hoi polloi (I think that’s how you spell it – or maybe it’s hoi paloi like in France). In between the eating, there is often a meeting – with the hois and pollois -- although not necessarily the same ones. But there is no pressure for the Sec State do anything except look and sound authoritative, because some Foreign Service officer has already tended to the logistics and details of whatever needs to be done. Like if the Sec wants to sign a treaty or alter a policy that will have enormous impact on the fate of the world, they don’t have to do anything except insist on the correct kind of pen – hopefully embellished with a feather.
Then there’s the furniture. If you don’t like the office décor left by your predecessor, you can go to the US Government furniture store (some would call it a warehouse), and pick out whatever you like. There may even be a little something George Washington once used – granted it will be old, dirty and probably bug infested, but if you want it you can have it. I remember when I was at State as an Office Director. My job title was not commensurate with my Foreign Service level, so although I had picked out some whacky red modern Danish stuff, the GSA (people who really run the government) told me I could not keep it and tried to take it away from me. Needless to say, I was beside myself (picture me, and me being hysterical) and I rallied the troops, who physically blocked the door. The GSA personnel decided that the furniture was so ugly no one else would want it and they left, -- it was not worth the effort. Anyway, my point is the Sec State can have anything they want from anywhere, anytime, any place. The drawback is that when the President goes, so do you –could be 4 or eight years. But it is not a lifetime appointment like the Supreme Court.
What about the Senate? A Senator is one of 100. To get anything done requires compromise, negotiations and sometimes threats. While the job may last longer than a Presidential appointment, you have to reapply every six years. And that means raising millions of dollars, hob nobbing for the votes and the bucks, rather than the a glorious international agreement, and never being certain if you are making a difference until you’ve been there for many years. There is a certain amount of visibility – if you want it, and the scrutiny about finances is a bit less stringent.
So, just for fun, put on your thinking cap and look at both jobs and decide which is more appealing. Or maybe you should do it while you’re on line at an airport waiting to go through security. We’re just sayin.... Iris
Posted by Iris&David at 9:19 PM

The common people; the masses.

USAGE NOTE Hoi polloi is a borrowing of the Greek phrase hoi polloi, consisting of hoi, meaning “the” and used before a plural, and polloi, the plural of polus, “many.” In Greek hoi polloi had a special sense, “the greater number, the people, the commonalty, the masses.” This phrase has generally expressed this meaning in English since its first recorded instance, in an 1837 work by James Fenimore Cooper. Hoi polloi is sometimes incorrectly used to mean “the elite,” possibly because it is reminiscent of high and mighty or because it sounds like hoity-toity. • Since the Greek phrase includes an article, some critics have argued that the phrase the hoi polloi is redundant. But phrases borrowed from other languages are often reanalyzed in English as single words. For example, a number of Arabic noun phrases were borrowed into English as simple nouns. The Arabic element al– means “the,” and appears in English nouns such as alcohol and alchemy. Thus, since no one would consider a phrase such as “the alcohol” to be redundant, criticizing the hoi polloi on similar grounds seems pedantic.