In Case You Missed It, The Election is Over....

The election is over. The Democrats are back in charge – whatever that means. John McCain gave a terrific and very gracious speech. (It was the old McCain back at last. Hopefully for good.) When Jordan got up this morning she said the best thing about waking was that Obama had still won. She and her friends couldn’t have been anymore excited if I had won. (I use me as an example because they are also great fans of mine and I don’t know who else they like). The truth is we all won—America won. Jordan’s friends are a wondrous bunch of 22-26 year olds. Mostly theater majors, many gay. They had rigged a wall size map of the states—on a wall. And as the polls closed they colored in the results. It was not as sophisticated as the NBC Rockefeller Center map but it was much more meaningful, and no one needed ice skates. Jordan filled in Virginia and couldn’t stop saying “We’re blue mom, can you believe it.” There was a great deal of screaming and crying and your basic 20 year old hoopla. The only difficult disappointment was the passing of Prop 8 in California which outlawed gay marriage. None the less, it was a privilege to be a part of what they wanted to be.

I couldn’t stop thinking about the past, and the dreams I had for the future of my kids. My parents were blue collar people who pretended to be white collar class. I think that was because we had rich relatives – who actually were white collar. We lived in a small town where there were two Black kids and probably 10 Jewish kids in the school. It was not difficult to be a minority except around Christmas when the Jewish kids had to stand in the back of the room as the rest of the class sang Christmas Carols. The Black kids were allowed to sing but they did suffer some attitude discrimination because they were so few and, for many of us, mysterious.

When I was in college one of my closest friends was an elegant African American woman from Philadelphia named Angela. We met soon after we arrived at school and I managed to rid myself of my sobbing mother. I was in a room with three cot-like beds, 3 metal desks and 3 metal closets. OK, it wasn’t pretty, but it was mine. Angie was wearing long black leather gloves and a stunning cashmere coat. I had my hair in a pony tail and was wearing a cotton turtleneck to cover a hickey I had been given by a sailor I didn’t know. (that’s another blob). Anyway, when Angie’s roommate Ellen arrived, Ellen’s mother started to reorganize their room. Making certain to move the beds as far apart as possible. “What is she doing?” I asked Soozie, who was later to become my dear dear friend. “She doesn’t want the black to rub off on Ellen, I guess.”

It was absolutely outrageous and I suggested that Soozie move in with Angie and we move Ellen to other end of the hall with a rich white girl from Long Island. It was some time ago and I don’t remember how I crafted the move but I did, it worked, and we have remained friends over the years. Ellen dropped out of school to get secretly married to someone she didn’t love because her parents forbid her to marry her high school boyfriend who was not Jewish, but who she did love. (Again, it’s another blob) 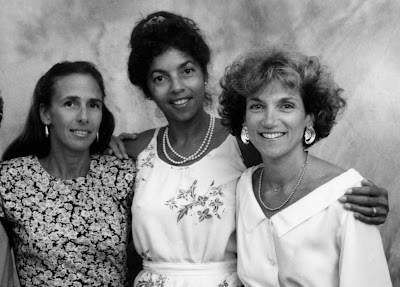 Margie (roommate #2), Angie (roommate #1), Iris (Chief Roommate)
That experienced shaped my attitudes about so many things. But the most important was that I wanted my children to be color blind. I didn’t get the bigotry then and I have no patience for it now. In those years we protested for civil rights, women’s rights and against the war. We went to candlelight vigils in Boston and Washington, and had sit in’s at school and in the Boston Common, and we worked for political candidates who reflected views that were close to our own. In other words, we had outlets to protest any injustice. And yesterday, all those young people took the opportunity and actually protested in the same way that we did so long ago – they Voted. They breathed life into a political party that took forever to have the courage to endorse the need for change. 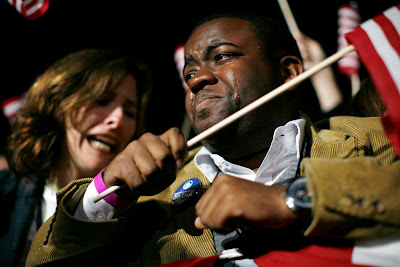 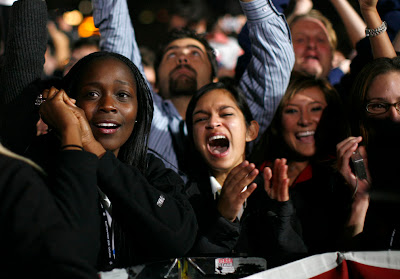 Scenes from Grant Park Tuesday night
Courage is a funny thing. My pal Barbara, who is African American was very skeptical about the Obama candidacy because, she admitted, she was afraid of what would happen if he screwed up. Michelle Obama said it most eloquently in an interview last November when she said that Black people were so used to people saying “No you can’t”, that they were hesitant to even try anything—yet alone say “Yes I can”. But all those young people who worked so hard to make last night a reality, believed Obama when he said “Yes we can” and happily, they were right. 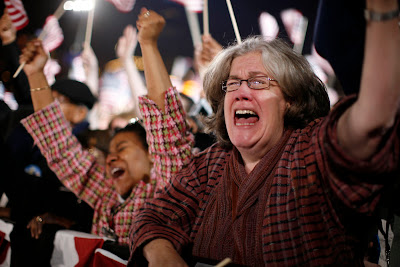 The best story I heard about the election was today. It seems that the “Washington Post” put out a special Election Edition. A friend of mine waited at the Safeway for two hours to get her copy and then found out that the “Post” delivery truck had been stopped and robbed and no one was going to get a paper – at least not today. Yes, it was an historic and memorable election but whatever were those thieves thinking? I guess they wanted to have a lock on the news—not unlike all the networks. We’re just sayin...Iris
Posted by Iris&David at 1:06 AM

We are all huge fans of yours!

Election night in Richmond was pretty amazing. I stood on the steps of the courthouse in the capitol of the Confederacy and sang the Star Spangled Banner for our first African American president.