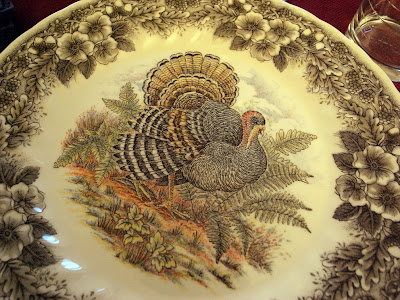 As is often the case, we celebrated a major holiday on a day that was not actually the holiday. This started a few years ago when Jordan wasn’t going to be available for the day of whatever celebration—I think it may have been Hannukah. Hannukah has always been a time we loved to party, but without Jordan making the latkes (traditional potato pancakes) for just us, it seemed a waste of time. I think we celebrated Hannukah sometime during the Christmas break. The year before we changed the day of celebration, we started a tradition of doing a Karaoke Hannukah. We had the karaoke machine but I’m all for participatory karaoke, and thank God for Oriental Trading, where you can purchase massive amounts of anything (in this case, woodwind instruments) for mere pennies. 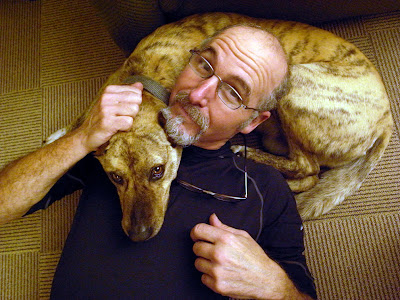 Jeff with Cooper (Cooper is the one with four legs)
This kind of buying, or supporting the Chinese economy may be questionable, but whose fault is that? And it is, after all, Hannukah. The selection for musical instruments was surprisingly vast, but when I assigned the items to the invitees it became much easier. In other words, I assumed that no one who had been invited, (despite their theater training) was fluent in any actual music producing instrument, and I wasn’t going to drag the piano from the sunporch into the kitchen (our stage for any event -- you have to see it to understand why).

Anyway, I bought lots of percussion, a few flutes, some whistle-like things, and of course, tambourines. In this way the audience could accompany the singer and if necessary, drown them out. The kids were as happy about the possibility of entertaining as they were about the food—but most are theater kids and they always want to do a show. They did want to take their instruments home but I explained that because we were establishing a tradition, they would have to leave them at the door. But they would see them again at the next event—no matter the date.

Last year we had two Hannukahs. One in November in DC for those friends and one in January for our NY friends. Of course, I was not going to schlep the basket of musical items to NY, but I replaced them with something almost as entertaining. They were sing-along poppers. You know the kind they have in England, that never actually pop, but which include a neatly folded paper crown for every person, as well as some cheap gift items. They are the English version of a piñata. The difference between these and the ordinary popper was that each, in the box of twelve, gave the participant a different part to sing in any one of ten silly songs. Kind of like “Row, Row, Row, your Boat”, but you didn’t sing at the same time. Hard to explain but much fun to do. I have looked in every store where I might possibly have found them—so we would have a NY stash for the upcoming Hannukah, (whenever that works out) but I can’t find them anywhere. 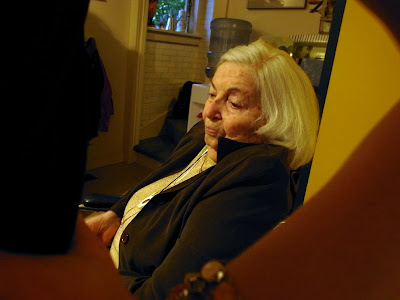 This year we started a new tradition. To have Thanksgiving before Thanksgiving. We decided that it was simply too difficult to travel the week of Thanksgiving and additionally too frenetic to shop or deal with the crowds. Equally important was that David was not going to be around and my mother didn’t care about the day as long as we were all together. Jordan and I traveled to Seattle last Tuesday and David met us out here on Thursday. 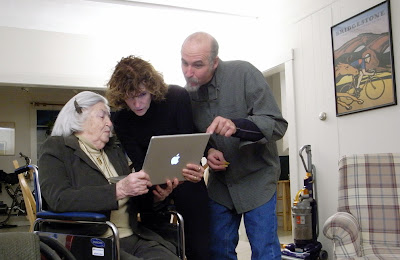 Mom scopes out some pictures
Mom isn’t actually in Seattle, she is on Bainbridge Island—a mere 30 minute ferry ride away. The Northwest is beautiful and you can actually see that when it’s not raining—which is not as often as I would like. Els and I shopped for most of what we needed on Friday. 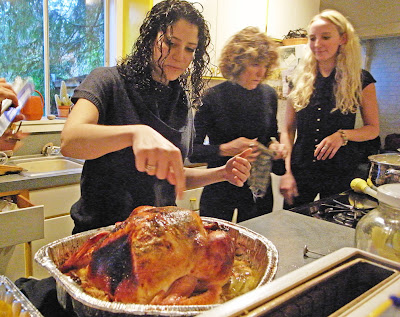 Turkey, stuffing, French cut greenbeans to use beneath the true delicacy-- french fried onion rings, squash, potatoes (mixed with buttermilk and butter instead of cream), vegetables for the stuffing, lots of butter and broth and juice for the gravy – and wine. 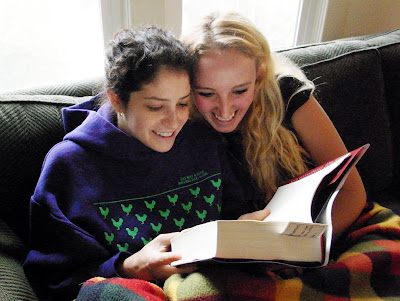 Oh, and we absolutely had to have a gingerbread house for Jordan and Devin to build. It turned out this one was pretty much built before they did anything to it, and the candy was a bit sparse, but they were both so consumed with “Twilight” the new book for kids about vampires (little kids, so there’s no gore or sex), that they didn’t care about construction complications—or the lack of M&M’s. It didn’t matter, it was cute enough to use as a centerpiece and Mom thought it was gorgeous. 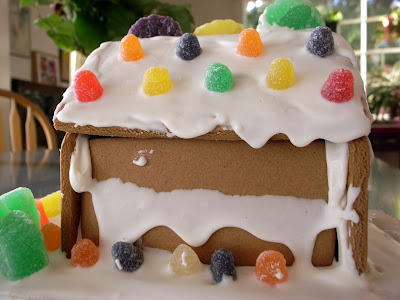 David’s cousins, Ernie, Diana and Nora came from Seattle and joined us for the festivities. It was delightful and without stress. I think this idea, about celebrating holidays when it’s convenient rather than everyone else does, 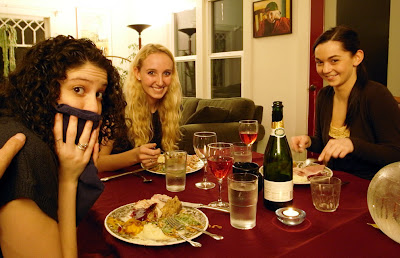 the cousins, Jordan, Devin, Nora
can help with a few things, not the least of which are those dreaded traffic jams. What it also does is to make you realize that the holiday is important and should be celebrated whenever you can do it with the people you love. We’re just sayin…..Iris 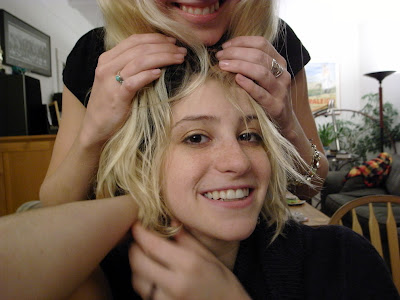 Jordan tries her self out as a blonde (Devin supplying the blondes)
Posted by Iris&David at 5:14 PM

Leave it to you to come up w/ this idea!
You a 100% correct about celebrating conveniently.
This concept puts the true meaning back into the holiday and removes a lot of stress and pressure.
This could lead to the practice of celebrating anything anytime loved ones gather...the sky is the limit.

Pammie Rae
ps When is Christmas Eve this year?

awesome story and so true, you need to celebrate the holidays when you and all your family can.
and is more beautiful because the super markets are not crowded