Who Is the Real John?

Is it possible that the John McCain we saw on Saturday Night Live is the real McCain? The one we liked in 2000, or even at the beginning of this election cycle. I mean, he was hilarious. Good humored, able to make fun of himself and his campaign, smart, and very 'today'. Once again the SNL people did not go easy on him, but his performance was inspired—and real. And wasn’t Cindy a hoot (Vanna, take note!). They were totally likeable. I wonder if it’s possible that the candidate we saw last night could prevail? That if he were the President, he would be all right. Or is that what we want to think since he might win. Or is he relaxed and good humored because he has nothing to lose—because he knows it’s all gone and now he just wants to have a good time and get back to a place where his colleagues in the Senate will welcome him rather than be angry with all he has brought to their Party. 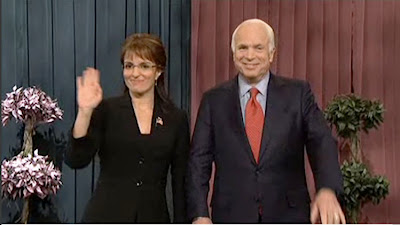 My daughter asked if I thought it would change any votes. I don’t really know but I don’t think so. I think it might assure the people who are leaning McCain that it is all right to cast their vote for him. That he is not the negative Neanderthal we have had to suffer for the last few months. That he is wise in his years but remains in touch with young people and their media.

This is something none of us will know unless he gets elected – and despite all the geniuses at the polling firms who do not account for human nature, this could certainly happen. Am I feeling OK about that. Absolutely not. And not because of the candidate. I do not for two reasons. The first is Sarah Palin. She is simply not someone I trust to make reasoned and experienced international decisions. If I were recommending someone for a job as radio or TV talk show host, she might be on my list. But as a heartbeat away from the Presidency, I don’t think so. Dealing with the rest of the world is a complicated, shade of gray kind of job. It is not one for either a maverick or someone who responds in black and white – things are good or bad, right or wrong. It is a job that requires diplomatic finesse., not good gut. Even if I agreed with her, I just don’t want someone who shoots from the hip instead of the brain.

The other issue is the staff—the advisers who surround McCain. They are not nice people—and I mean that in the nicest possible way. They are lobbyists, political hacks corporate dweebs and ideologues. They have investments in oil, war related products, and a powerful job that provides them with income. They are the McCain big money donors. Not a one of them contributed less than $50. Despite what they say publicly, they don’t care about you or me, the nation or the future of our children. They are rich and protected. They are the people who are arguing about tax increases because they make way more than $250,000 a year. The old John McCain agreed with Obama that there should be a sliding scale on taxes. The new John is screaming 'socialism.' We all know that Obama is talking fairness not socialism—and the President doesn’t govern alone. There is a Congress that is supposed to act in the interest of it’s constituents. Anyway, their kids will be OK. Ours are inconsequential. There are those people who might think this is heartless and an overstatement, but I know many of them. I have eaten breakfast next to one of their meetings (I am usually in pajama like clothing so I look totally unthreatening and they chatter unabashedly.)

McCain’s SNL appearance was too little, too late. It will replay on every NBC station and, since he didn’t have enough money to do an infomercial (those $25 donations add up), it will be good free press. I wonder what his older handlers think. Do they think he was taking a shot at their questionable advice. Do they realize what a mistake they made trading that John McCain for the one we saw last night. Probably not. They are probably patting one another on the back and thinking, well we put one over on young Americans with that appearance. In truth, if that McCain reappears for the next two days, they could actually pull off a victory. But then, which John MCain do we actually get to lead the nation at this time of crisis. Do we want it to be too little too late, or do we pray that last night’s guy is the one who will govern? We're just sayin'...Iris
Posted by Iris&David at 12:08 PM

I think we finally saw the 'Real' John McCain.

Too bad his handlers never let John out of the bag until now.

I am praying that neither one of the John McCains will govern and holding my breath until Wednesday.