On October 6, 2007, my new friend, The Amazing Kreskin, predicted that Barack Obama would be the next President of the United States. He revealed the prediction, which had been on display in a strong box, on November 6. Joey Reynolds, a renowned talk show host in NY, had a duplicate box with the prediction secured in his possession at the radio station. The boxes were opened in the presence of the press.

If you think back to December of 2007 you will remember that there were a plethora of Democratic candidates, including John Edwards, Hillary Clinton, and Republicans like Rudy Giuliani, Mike Huckabee, Mitt Romney, and of course, John McCain. Additionally, it was pretty clear to most Democrats, that Hillary was the likely choice. So how does he do it? 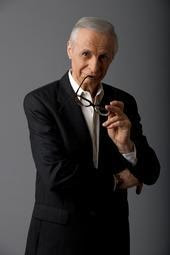 In the best of Amazing’s spirit and an adept sense of showmanship, he was so sure of his prediction that he was willing to bet 10 people each $10,000 that his prediction was correct. Any money he won would have been turned over to charity. Not surprisingly, not one person was willing to take the challenge. Because, after all, the man is Amazing.

So, how did he know? Did he channel the spirits and talk to Abe Lincoln. No he did not. His predictions were based on the serious crisis facing the nation including terrorism, the economy, and an Oprah Winfrey endorsement. Who says celebrity endorsements aren’t important. Well, maybe they’re not. But Oprah isn’t an ordinary celebrity. She is the voice of an enormous number of women. Some campaigns call them “non-college educated”. I think that’s very arrogant. And condescending. How about we say, “high school educated” The pollsters don’t like that for whatever reason, but it’s one of the reasons women don’t like pollsters. They don’t hear what we’re saying.

What’s also amazing (not the person but the idea), is that so many people who were skeptical about an Obama victory, are now saying that they knew it all the time. The same people who said that we needed to consider the “Bradley” factor and others who said young people wouldn’t show up – were absolutely incorrect. The Amazing looked at three factors to make his prediction. But he’s a guy who is well read, sensitive to the temper of the country, and incredibly perceptive. The media was prepared to ignore all the signs because they didn’t fit the picture. They didn’t feel the passion of the people who were tired of the same old crap—including the media crap. They blab about this thing and that. They are self assured and not hesitant to tell you what you should be thinking and doing and yet, they don’t know much more than you, and have the same ability to screw up. Like didn’t you love it when Joe Scarborough, the host of “Morning Joe” and a good born again Christian, dropped the f-bomb yesterday. He did it without thinking—like so many of us. And he felt incredibly stupid when he realized what he had done – like so many of us. The pundits and talking heads are no different than we are except maybe they don’t know as much because they don’t listen to voices that should be ringing in their ears.

I used to go to Wal*Mart, look around and wonder why these people were no longer Democrats. The answer was so simple. Our predictions about who they were was totally off base. We, like the Amazing, just needed not only to listen but to hear what people were feeling. Yes, hear what they were feeling. The President-elect understood. He realized that people wanted to be included in whatever the change and listened to about their crisis. He got it and it was truly Amazing. We’re just sayin….Iris
Posted by Iris&David at 5:32 PM

David congrats on the People magazine double-truck (or close to it). Jeans or no jeans, a historic photo for sure.

Iris congrats/thanks on all the blob work.

By the way David , the talking Holga made me shoot coffee up my nose. Very funny, and heart warming.(the video - not the coffee shooting out of my nose - although in a sense it too was heart warming)

Hmmm ... that White House jeans/chino story did leave me wondering about the death of common sense. Lovely to read of you on Veterans' Day at Pere Lachaise Cemetery. Iris's book just arrived from Amazon. Chuckling already.