I’m visiting Paris for a couple of days this week. (It probably sounds like City-dropping, but there was a time in my life when I would just hop a plane and be here the next day without a great deal of planning or forethought. It still feels very much like home or if not home, at least a place where I feel comfy, and in whose language, after a decaf’ or two, I’m pretty much up to speed in.) And lest there be any doubt, NO, you cannot wear Jeans to a Presidential event at the Elysées Palace. But that aside, and forgetting for a minute that while the chic French have more chic people per hundred units of populace, the signature look of the decidedly unchic – (or do I need to redefine chic?) – the 4 day growth of beard, carried with masterful Gallic insouciance – is also a big seller on the streets of Paris. My suspicion is that Warren Buffett didn’t buy into Gillette based on razor sales in France. England, Germany? Maybe, but certainly not here.

Yesterday was November 11th, and while like most cultures, it remains difficult for the older folks to teach the younger ones about the things which matter, the French, having almost succumbed to holidays as a way of life, still try and remind their kids why that day is important. 11/11/11:11 The moment in 1918 that the World War One Armistice took place. If you aren’t sure what that’s about, read Tom Keneally’s wonderful masterwork Gossip From the Forest. It will fill you in on what happened and what might have happened (it’s factual event based fiction) at the end of the war and makes for gripping reading. There were joint ceremonies in Verdun this year, the site of a horrible trench battle in 1916 which killed almost 300000 troops. In Paris, it was hard to find much of anything ceremonial, so in the afternoon, I decided to make my way the short distance from my hotel to the Pere Lachaise Cemetary and see what was happening. Out of ideas of what to photograph somewhere? Head to the cemetary. Life is always abundant there. Pere Lachaise is in a district in the 20th arrondisment which is quite working class, and the streets around it are filled with Moroccan, Algerian, Egyptian and African cafes. You pass by small groups of men, sipping coffee, and talking with great enthusiasm, as if they are on their home turf. Which they are. Entering the cemetary there is a large board posting the names and locations of some of France’s finest sons and daughters. Yves Montand, Edith Piaf, Apollinaire (not the water, the Poet.. and as Jordan Kai might say… “and… a singer!”) They are all there, and hundreds more. It was a place frequented by the lesser classes (to hear a docent describe the place) until the end of the 19th century when burial here finally achieved that status of chic. Then it was a race to see who could get in before they ran out of room. Happily, there is a lot of space, and though crowded, you can get a wonderful sense of the breadth of French cultural and political life with a long leisurely stroll. Which is what hundreds of folks were doing on yesterday’s Armistice holiday. 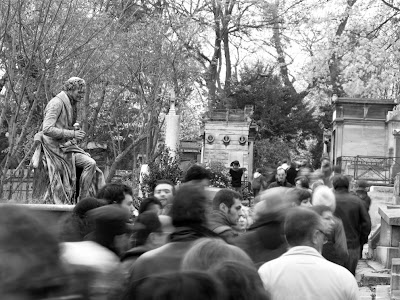 I walked past tomb after tomb, each more decorative than the last, till I arrived at Section 6. There, a crowd of 50 or 60 was huddled around a fence, a beret-covered gent speaking to them. He spoke with a very authoritative voice, as if he regretted not taking that teaching job in the Sorbonne Philosophy Dept. when it was offered fifteen years ago. And he’s been making up for it since. He’d obviously been going on for a while by the time I arrived, and I assumed he must be doing a tour of the grounds, pointing out the notables. A woman, the kind who aims her point & shoot camera, fires a frame, then turns around and departs, leaving herself with the impression she has actually seen something, asked him when he was going to finish, so she could take a picture without all the crowd. He berated her with delicious irony (even in French I got it), and kept yakking, pleased at the sonaural tones of his own voice. Then, finally, he did begin to wrap it up. “Jeeem,” he said “was buried July 7, 1971, with five people in attendance.” Like the rest of the people there, I couldn’t imagine a funeral at this location with only five people, so I waited for more. But he gathered his troops and moved on, and I was left standing there, all of sudden nearly alone, in front of the headstone of Jim Morrison, the Doors singer who died in mysterious circumstances in that summer of ’71. I was then in East Bengal (Calcutta) covering the story of the millions of Bengali refugees fleeing East Pakistan (and what was to become Bangladesh.) Rock and Roll was far from my mind, though I’d had two encounters with the Doors. 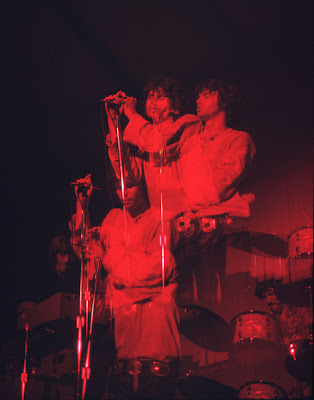 In 1967, at the Colorado College Homecoming Dance (is there a less likely candidate for a ‘hot’ band?) the Doors, who’d been signed the previous spring before “Light My Fire” made them superstars, actually showed up and played a 90 minute set. It was the only time I didn’t carry a camera my whole college career, and alas, I have no pictures. But a year later, in London, on my 23rd birthday, I saw a Doors/Jefferson Airplane concert at the famed Roundhouse. Dork as always, I had no date, but I did have a camera, and though the results are quite uncompelling, it was the beginning of a not very productive time of trying to photograph rock musicians. 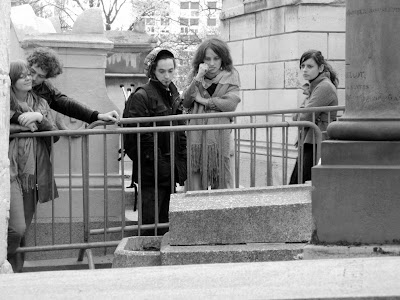 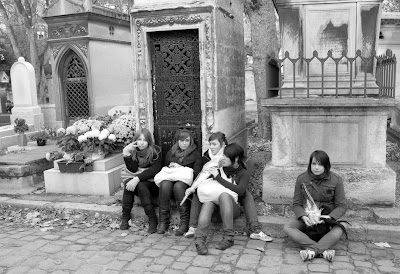 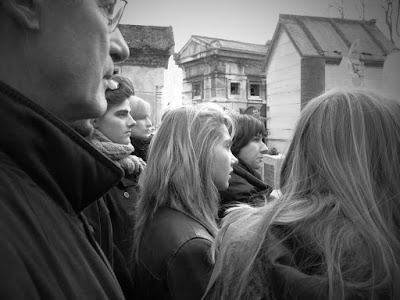 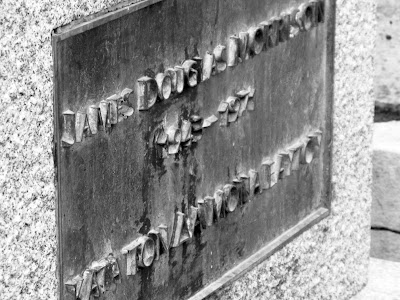 The interesting thing about Jim’s gravesite at Pere Lachaise is that quite like Jimi Hendrix and Bob Marley, the kids of today are totally plugged into their music, and carry a sincere appreciation for them. And, being France, you see wonderful little moments of romance nestled near the edge of the tomb. I suppose that youthful appreciation of these musicians is rather like that of my generation’s feeling for Glenn Miller and Ray Noble.

I wandered off and met a woman who carried pounds of documents, guides to where the famous are interred. She mentioned Chopin, and as time was fast bringing the day to an end, I followed a short route she gave me to see the Chopin monument. But just before arriving, I turned a corner, to see a very modern headstone, laid out cross ways with two names on it. It took my breath away. The jazz pianist Michel Petrucciani, a man whose music could light up a room in a singular way. He was a little music machine. And I mean a little machine. 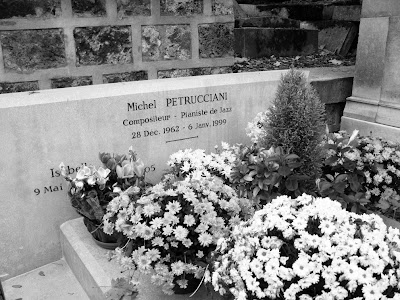 Born with severe handicaps, tiny and mal-formed, he took the body he had and did absolutely wonderful things with it. His music, fresh and seductive, takes you places you forgot to stop on the way, and lets you linger. I guess I’d known he’d passed away, but certainly had no idea it was nearly ten years ago. I stopped in my tracks and leaned forward to touch the headstone. Such a mighty rock for such a tiny man. Such a mighty sound for such a tiny frame. He seemingly never understood what he couldn’t do, only what he could, and lucky for us, there is his music to prove it. I looked around to find a stone to leave – in the Jewish tradition – on the headstone before parting. Stones were not easy to come by, but I did find one, and as I walked back I heard a French woman, shocked as I was to find Petrucciani here, 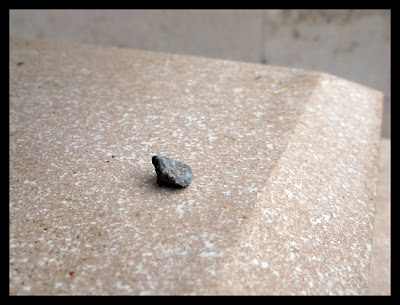 as always, click on an image to see it full size
Posted by Iris&David at 2:36 PM

I just got turned onto your blog from aphotoeditor and after watching your Beijing video I wanted to thank you for the effort and congratulate you on a great piece.

I live just outside of Paris (Saint Germain en Laye) and was surprised to read that you are in town. Enjoy the city and bundle up as it will be even colder tomorrow. :)

John, funny how these things work out, isn't it. Thanks for the advisory for tomorrow.. and i am glad you enjoyed the video. It's getting to be a small, small world, indeed (see you at Paris Photo?) i went for an hour tonight. quite amazing stuff there..

I am headed over to Paris Photo after lunch for a couple of meetings (some of my partners will be exhibiting at the show). If you like, we could meet for a coffee; just email me at jmathieu at microsoft.com with a time and place.

The one and only time in the Pere Lachaise Cemetary was a cold January 1990.

A dozen people wandered the grounds.

Morrison's grave was a pit of earth with two packs of Marlboros left behind.

I was embarrassed by the graffiti by Doors' fans on the other tombs.

Don't forget the victims of the Pari Commune of 1871 are burned there in a mass grave. The art work on one wall of the Cemetery honoring them is worth the visit.

Speaking of WW 1 Armistice, I think this picture must be from France at about that time,

I can confirm you can wear jeans at a presidential event at the Elysee Palace, and many photographers (and video journalist) are wearing jeans. Of course, you can't wear some for dinners or if you're allowed to take pictures of an official party. But for officials events such as visits, meetings, medals and so on, it's ok.
I have to say press services are asking more and more to journalist to try to make some efforts - as some of them are really bad dressed, wearing baskets or military clothes - and have asked to french agency to tell their journalist to make an effort.

I came across your blog and noticed the fantastic picture of Jim Morrison you took at the Roundhouse in London 1968. I'm wondering if you have any more photos from this concert that you would be willing to share? Feel free to contact me at webmaster@radioismoaning.com or brysonkriz@hotmail.com

It would be great to hear from you, even to hear your own review or reflection of these concerts.