Without Reading or Listening...

It is almost impossible to write without reading or listening to the news, but I try not to be influenced by what other people think before I muse on any subject... Let me say, no one else writes about my mother so it’s a little easier to be original, but funny gets to be another issue. Nevertheless, before I share any original prose let me say, the cable networks are fairly predictable while at the same time being somewhat schizophrenic. The pundits have at least five predictions a week (all different), with each one being an adamant statement about who is leading and who will win. It’s gotten a little easier lately, but they’re still treating each announcement like it’s the first one they ever made. I believe that part of it is not only a wild attempt to predict results but actually an attempt to sway the 10 voters who watch the political cable shows. They still haven’t learned any lessons about exit polls and predictions, but they are on the air for 24 hours and it’s not easy to fill all those hours. Maybe they should try an American Idol kind of show where celebrities appear and make their case for their favorite candidate and then the public votes, not on the candidate but on the presentation. The winner of this contest will get the government job of their choice—or better yet, the celebrity gets to pick the pundit of their choice to be a roving Ambassador and they have to go away.

There was a definite change (that’s change for the good and I hate the word), in last night’s debate. There was far less animosity, and when one of the moderators suggested that an Obama-Clinton or Clinton-Obama ticket “a Democratic dream ticket”, neither of the candidates ran screaming from the room. And most importantly, Bill Clinton, whose absence was noticeable, did not leap onto the stage, grab Hillary and race from the room yelling “Not without me you won’t!” Then, at the end, there was a sweet, almost huggy moment. I guess Obama got over himself and realized that if you’re going to be the President, human moments will have to be few and far between. Wow, what a thought. 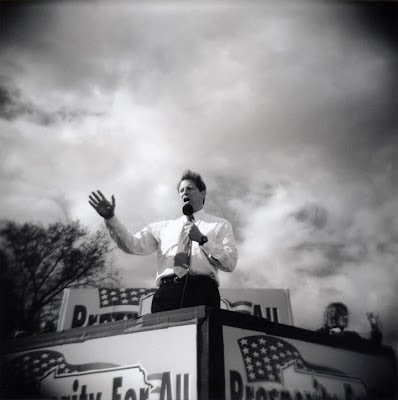 Vice President Al Gore, in the good ole days
Hardly the way we think about the Nobel prize winning activist. The President and the Vice President might like one another when they are getting elected but once sworn in, the President often founders for how to deal with his ‘deputy’. The Vice President is, by law, the President of the Senate, but that means he/she breaks ties and sits in back of the President during the State Of the Union. The important jobs are all positions appointed by the President, while the decision for who should be Vice President was made with an entirely different agenda, not including important. It’s always a struggle. So which of these candidates wants to be a second thought? It’s more likely that Obama would even consider doing that for the next four or eight years, but not likely.

Anyway, it is about time for the candidates (all of them) to start campaigning against the opposing party. My anecdotal surveys show that women hate the bickering, and young people have no patience for it. It’s like when Kerry and I constantly bickered about who would pay for dinner, a show, or any of our entertainment delights. Our kids, who could not deal with our “it’s my turn” (and to our credit we did not talk about who had the tuna and coffee, we fought to pay, rather than not pay the bill), suggested we open a joint account—so we did. This is an idea who’s time has come. Friends, who share a love for entertainment should absolutely do this. We both put the same amount of money in our joint account, we only use it when we’re together, and when the bill comes it doesn’t matter who pays— the money is already spent, it’s painless. Anyway, enough about my life style. Let’s talk about what I think. Back to the campaigns. Civility is much more attractive and it makes you feel proud about your party and your choice. Now McCain and Romney have to do the same thing. It will be harder for them because their ugly attacks have been much more personal. It seems to be that they should both go to Iraq or a church to which neither of them belongs, hold hands (the little baby Jesus will be with them), and sing “We Are the World” or “Come Together”. Either works.

Now, since the candidates are in agreement about most of the issues, it’s time to look at their advisers and funders. How much bundling of money (often in the millions), has been done and by whom (those people are likely to be Ambassadors and in these difficult times being an Ambassador goes beyond entertaining diplomats and getting drunken American children out of trouble.) We should also be looking to see if there are women, minorities, and well respected experts who understand the realities of their specialties, (speak in simple clear terms and are accessible), who have a voice. Like when you look at campaign strategy meetings, who sits at the table? The people who surround the candidate are important because during transition and on that well awaited “First Day,” who will actually be in charge of staffing or working in the government. In the last Clinton Administration we said, “does the agency/department/board/commission, look like America?” For those arrogant, narrow thinkers who said, “well you don’t just want to appoint any minority or woman because they are a minority or a woman” I always said, “Guess what, there are qualified minorities and women who can fill any job. You just have to look and let people know that the new administration is based on talent and opportunity.” Wouldn’t that be nice? We’re just sayin...Iris
Posted by Iris&David at 11:09 AM

Hi Michael,
I wish I knew what the thanks were for but I'm always happy to have done something even when I don't know what it is--I think

Oh you know, just taking the time, and putting something worth reading out there for folks to ponder.