I am sooooo overdue. It's over a week since I reported for blob duty.You know the worst part of it is, you think.. “I’ll have all that time on the plane... Miami to Los Angeles, New Orleans to Omaha” and what better is there to do but write for the blob? Frankly, I suppose if you are on your own, there is nothing better. The problem is, if you’re trying to pretend that you are working for a living (and yes, I still subscribe to the Soviet concept of...”they pretend to have a campaign, we pretend to cover it..”) the time isn’t really your own. And in the newly liberated world of digital photography (“Oh boy, I get to edit my own work!”) the dictator ship of the laptop is anything but easy going. I’m sure I have complained about this before, but when you are covering a news event which requires a snappy turn around of images, and a political campaign is definately that, the time alloted to take care of the back end of the work is really minimal. So you end up scrounging for time anywhere you can find it. On the bus from the airport to the civic center; for a few minutes after a rally, before bus departure; even later in the hotel (the worst since you end up getting to bed at 2am). None of these is a great solution. Yes, it is cool that I get to decide what the editors see: I run thru the pictures and make that determination. But it’s never as easy or quick as it seems. I marvel at the wire and newspaper photographers who really have honed this to a science. The little connector which holds the memory cards from the cameras, and feeds the images into the laptop (card reader) are usually velcro’ed to the outside of the laptop. You just pull the card out of the camera, and plunk it into the reader, start PhotoMechanic, or whatever editing software you use, and minutes later you have all of the 294 pictures you shot half an hour ago, on your screen, ready to accept proper captions, be renamed and numbered, and stowed in a folder all their own. Then you go thru them one by one, marking the ‘selects’ and eventually sending those to your editor. If you work for AP or Reuters, you’re just trying to get one or two images out immediately, and maybe a few more later when you have time. But these folks are amazing: they can offload, mark, edit, tone properly, and caption a picture and have it going out on a wireless card in just a couple of minutes. Having once spent days in the darkroom, coaxing a single image off a roll of fim onto a piece of paper, the new tech is really astounding. But the downside is, there is never a break. Now I don’t want you all worrying about us freelance photographers and how we never have a chance to sit back, have a cocktail, ponder the issues of the day. No, that still happens though rarely. Most of the time we’re trying to get the images just shot into the ‘send em now’ stack. The bottom line is, finding a minute for reflection, thoughtful discourse, or hard liquor, becomes a real issue. For the most part, Room Service has replaced going to cafes in towns where we are working. There is simply no time to go off for a couple of rejuvenating hours, talk about the issues of the day (whether photographic, political, or personal) and be re energized for the following day. It’s a tough trade off. I like the fact that an image which I adore will actually be seen by my editor. No question about that. But in the end, I wouldn’t mind being able to relive the time-tested method of yore:
Put film in bag, find courier who will take it to the airport and ship it, go to bar and order a Bass Ale (draught, preferably.) And even with the wireless internet cards we have (I pay $60 a month for my Verizon card) sending a 3 or 4 megabyte file can be slow. So you may end up doing what I had to do last Thursday night:
Finish shooting, go to hotel, order some not very good/over priced dinner, upload pictures, edit pictures, caption pictures, create a folder of selected pictures, tone in Photoshop RAW (this takes a couple of minutes per picture to work it and Save it), and eventually try and send the pictures using FPT software. When it works, great. When it doesn’t, often enough in these hotels who are only too happy to still charge you $12-15 a day for internet, you have to keep getting up all night to make sure the SEND is going just the way it should. Last Thursday, I got up at 2:30am, started sending batch One, then spent almost an hour at the keyboard making sure the pictures looked good, and saving them to yet another folder. At 5am, I got up again, and sent the second batch. If that sounds like a lot of work, given that we work 14 to 18 hour days just TAKING the pictures, I’d have to agree. Sure, we love what we do, and wouldn’t be happy doing anything else. But there is something about a never ending day which eventually causes you to lose a bit of your edge. It all caught up with me on the plane to Seattle with Senator Obama last Thursday. 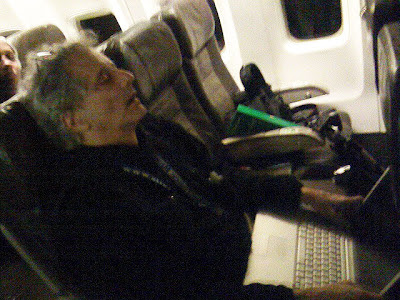 I was in the middle of editing on the plane, and apparently fell asleep at the wheel, hands on the keys, images on screen just waiting for my tender touch. The good news, there was no obvious drooling. I know we arent’ really yet into the ‘computer age.’ We’re kind of playing at it; but the real computer age won’t have computers that you have to type on or talk to. They ll just do their job. We’ll be happy for that moment I guess, though it shall surely be as intrusive as anything John Ashcroft could dream up. But it may give us a chance to catch the forty winks which have been absent in the last election cycle. We could parcel out those forty winks over the course of a week or so, and no longer would the photographic witness have to struggle to keep those beloved eyes open. I mean, hell, there’s a lot to see! We’re just sayin..David
Posted by Iris&David at 10:47 PM

I was growing concerned. Haven't heard from both of you since Supersized Tuesday.

Thank goodness you were simply asleep.

Did the flight attendant put a blankie on you?

Hard work! At least in my line of business we get to (have to) drink.

I feel for you, man.