They Call It FUN

Isn’t it amazing how quickly things turn around. Just a few weeks ago most people were talking about how Obama’s chances of more than one term were limited at best. “If he doesn’t do something.” Then, like magic, he did something. He finally did a few somethings. He must have been listening when John Podesta suggested he learn to use the Presidential tools, and additionally, that he needed to be proactive about where he wants the country to go. He needed to say to the Republicans, “don’t vote with me and you will have to tell your constituents why you are not only against human rights, but you have refused to take care of those heroes who risked their lives on 9/11, and are now paying the price with their health.” (If only there were a few more senior staff women to whisper in his male dominated ear, it would have taken a month instead of two years.) Whew, he must have been exhausted. He really needed that Hawaiian vacation. Actually, I could use a Hawaiian vacation. But I’d spend it with the Sullivans and have more fun than the President. It isn’t against the law to have more fun than the President, is it, at least not yet? It is not yet a violation of some new Homeland Security law, is it? No, I don’t think fun is a target for terrorists. Even Janet Napolitano decided to have some fun and go to Afghanistan, which as far as I know is not yet part of the homeland, or for that matter, much fun. And I mean that in the nicest possible way.

But that’s not what I wanted to blob about. Sorry I didn’t write my annual Christmas blob, but the holidays and the writing are not as easy when you can’t call your mother or father, to tell them what a wonderful time you had (wherever you went), and they should have a healthy, prosperous, joy filled new year. Yes, that was a little bit of whining – but it could have been worse. One t-shirt I have says “it could always be worse,” and if it is written on a t-shirt, thus it must be true. 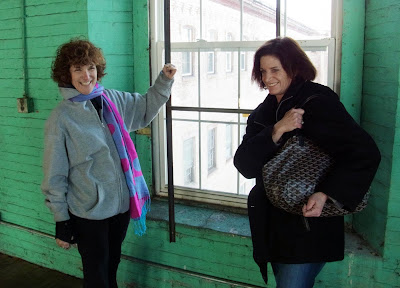 with Joanie in N'burgh
This year we are not celebrating at a party, restaurant or some expensive nightclub. We are staying in. We are in upstate New York, seeing family, checking out old haunts and, having just spent what was an entire wonderful day looking at a variety of properties so perhaps, even finding a place/home for all our worldly belongings. 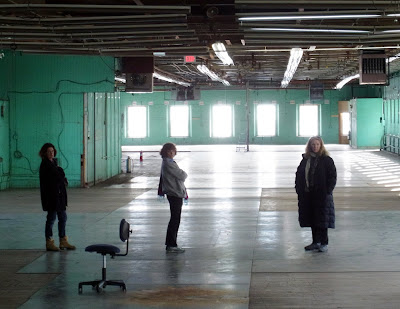 with Joanie and Kerry...
Isn’t it funny (there’s that word again), that at this time of our lives we are starting from scratch to make a new life for ourselves and whoever else wants to tag along. 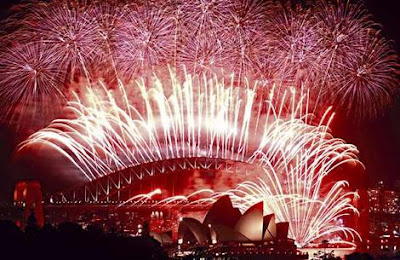 if New Years fireworks is your thing, Sydney is your place....
New Years has never been one of my favorite holidays. There’s simply too much pressure to have a good time. This usually means eating and drinking too much and staying up well past a reasonable bedtime just to see if Dick Clark is still standing. Rumor has it that he is breathing but unfortunately not able to stand long enough to do a New Year’ party. Sad, but somehow I will not feel as bad if I get a goodnight’s rest while Snooky, Carson Daly or Ryan Seacrest blather on about the minutes ticking away until the crystal ball falls in Times Square, where, having been there since 3pm, all people want to do is get to a bathroom. (And kiss some loved one or a complete and utter stranger). Other people’s Cooties do not an attraction make. 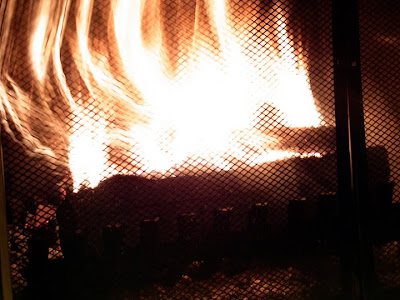 an actual "fireplace" fire, stoked for New Years
The idea of preparing a great meal with close friends and a beautiful fire sounds like perfection. It will give me time to make and discard a list of New Year’s resolutions. Finish a good book, drink a couple of glasses of fine wine and be thankful for all the good things that happened to me this year (you know who you are), and the new exciting adventures we will have in the year to come. And that includes a great deal of --- yes, Fun. We’re just sayin’…. Iris
Posted by Iris&David at 6:11 PM

Hi there :0) I dont mean to bother you, but you mentioned in a previous post that you have access to one of those huggies/kleenex lullaby tapes...i listened to mine every night when i was a child and was heartbroken when i couldnt find it at my parent's house! I just became a mother myself a few months ago...it would mean so much to me to have a copy of the tape for my son to enjoy growing up! I would be willing to pay you $20 for a copy of your lullaby tape. Please let me know if youd be willing to do this for me and my little one :0) Thank you and Happy New Year to you and yours!
~Tenille
tenillegates@gmail.com