The Road Not Taken

During the last few weeks I have preferred to write about my moving woes instead of anything substantive. It’s been hard to think beyond what to do with all our worldly possessions. But with the President’s decision to give tax breaks to the richest 2% of the populace, in order to get an extension of unemployment compensation for hardworking Americans who, because of a lousy economy, lost their jobs, life savings, (and in many instances, homes), I could no longer remain silent or as others might describe it, consumed with self.

The whole political ‘landscape’ needs a good paint job. Congress is not only ineffective but, some would agree, has dangerously limited vision. In lieu of making their constituents a priority, they are playing political games with constituents lives. And the professor/community organizer in Chief, just wants to be friends with people who want to destroy him. I would suggest, the first thing the President and his merry band of advisors (including Geithner – who did not go to jail for doing the same thing they convicted Wesley Snipes of doing -- only Snipes is supposed to serve 36 months) needs to do, is watch some old episodes of “The West Wing”. He needs to take a few lessons in leadership and Congressional diplomacy (a good kick in the ass), from Jed Bartlett, the President many of us expected Obama to be.

A few years ago, John Spencer, a friend, fine actor and terrific Chief of Staff on the “West Wing”, came over to our house (the one we no longer own), for a barbeque. We invited assorted Washington types with whom he could mix and mingle. At one point he asked us if we thought “The West Wing” was a accurate portrayal of the way things work in Washington. Almost without exception, (our pal Janice from Salt Lake City who admittedly didn’t know about the way Washington works, she also didn’t know who John Spencer was), it was agreed that the reason we loved the show was because it was not accurate, but it was the way we wanted things to be. My guess is that a great many people thought the same thing. The nation was so excited about the possibility of some real change in the way Washington worked, that they thought a “West Wing” like the one Hollywood produced was a real possibility. 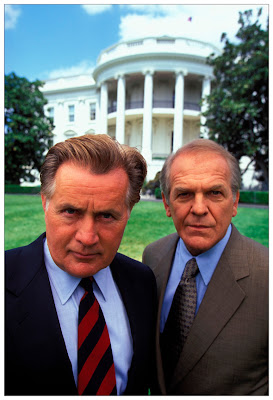 My guess is that there are a great many Republicans, as well as Democrats out of work. It is just possible that not all Republicans are rich and not all Democrats are middle class. If the President had addressed the nation and said that he would not allow the Republican Congress to cut off an extension of unemployment compensation in order to add another 80 billion dollars to the deficit, so the 2% of the richest people in the nation could enrich themselves a bit more, the public would have supported his position. But it is impossible to support a position that turns out not to be a position – just more rhetoric.

When I listen to what people say about Obama lately, it always starts with “I like the guy, but….” Exactly what do they like about him, I wonder. He seems to be a good father, and husband. He is handsome, personable and articulate. He has good taste in clothes, and plays a mean game of basketball. Those are all likeable qualities. But where is the man we elected to get us out of a war, make certain human rights were respected in our military (where the war still goes on). Makes employment for everyone who wants to work, the national priority. And demonstrates an ability to lead rather than compromise, when it comes to making a positive difference for the majority of our citizens.

For those of us who know all too well, the way Washington works, being nice to, rather than merely respectful of, the opposition’s demands, is a terrible waste of time. People want leaders to lead. To have a strong voice and clearly defined positions. Even if we don’t agree with that voice or position, we would feel comforted by the idea that there was a leader who knew in what direction he wanted the country to go. If you look like you know where you are going, people will follow. If you change direction and seem confused about the path you should follow, people will eventually lose confidence in your ability to choose a path. It’s not so much about the ‘road less taken’ as it is about keeping a sharp eye on whichever road you choose, and making damned sure you keep the end of the road in sight. We’re just sayin’… Iris
Posted by Iris&David at 2:44 AM