One of the joys of traveling is to have those unexpected meetings, the kind that start by literally bumping into someone, and from there to conversation, and perhaps even friendship. I have been lucky over the years in making friends with some great folk, and I number amongst those none more wonderful, or amusing then Peter Carrette. I first met Pete in Kuala Lumpur. Just after the fall of Vietnam, which I only observed from New York, I made my way to Korea. I had a hunch, wrong I suppose when you think about it, that if there really WAS a domino theory at work, (the idea that the fall of one Asian country to the Commuist RED Threat would lead to a spate of others) Korea seemed like the most likely spot. Korea was, prior to Vietnam, the last time an Asian war was fought with the Commies (aside from Malay insurgencies, amongst others) and while the armistice had lasted 25 years, the North was always unpredictable enough to make you wonder what their next move would be. It was the mid 1970s, and while it feels literally like last week, it has been thirty five years. Hard to believe. After producing what became a color cover act (when journalism existed primarily in black-and-white, a big color spread was called an “act,” making it seem like an even bigger deal than it was.) But, let’s face it, the cover (shot in Kodachrome) of a magazine seen by 25 million people, and 4 pages of color inside, WAS a pretty big deal. Especially that I had talked my way into the story. I sold it as “the next Asian domino.” Suzanne, the researcher had agreed to offer me something substantial enough to make the trip worthwhile… probably something like an air ticket, a big bag of film, and 5 days shooting, but it proved once again the old adage that you are worth far more “on site” to an editor than you are standing in their office telling them how great you are. Once I was in Seoul, as the editors all started to agree that it was time “to take a look at the Korean peninsula” I parlayed the assignment into a month of shooting, including an exclusive interview with the difficult to encounter Park Chung Hee, the President. You know you’re onto a good story when they fly in the big guns from DC, and when Jerry Schecter – the chief Diplomatic Correspondent – came to town, this went from being a little one pager to a full blown “color act.” But I was just starting to feel like I was the master of my own destiny again, as I held the first copies of the magazine in my hand several weeks later, already on a plane to Kuala Lumpur. As you could do in those days, one story was just a plane ticket to another. Next up, Muhammed Ali – the world’s most recognizable person – was going to defend his title against Joe Bugner. If you could think of the notoriety of Michael Jackson, Madonna, and Justin Bieber all in the form of one person, a boxer from Louisville, that was Ali. In little villages in countries where a TV was a shared appliance in a village, the one person the village kids might know in Congo, Peru, and Indonesia, was Muhammed Ali. The days before cable tv, before the internet, before email. Remember those days? Not easy to even imagine how we stayed in touch except by the occasional transoceanic phone call (more romantic than just “long distance,” as a concept) or telex (that blazing early version of Instant Messaging.. 110 baud typing machines. But somehow we did get along without all those moments of getting on elevators without pulling out a Blackberry to see whatever latest unimportant bit of spam had been sent our way.

But I digress: Ali in KL. A big deal. Drew press from around the world. I remember small teams of young uniformed Malaysian schoolgirls with their autograph books in hand, staked out by the Hilton, waiting to get someone “famous.” And when my friend David Greenway, a long time foreign correspondent who had that look of someone that said “you really should KNOW who this guy is…” told a group of kids “THAT guy is very famous, you should get HIS autograph.” I was the object of that suggestion, and moments later was surrounded by a clutch of smiling, giggling girls who knew not who I was, but felt they nonetheless needed my autograph. I shall never forget the first entry I saw, as it just seemed like the perfect introduction into the world of celebrity autograph hunting: “Police man, Police man, do your duty…Here comes Daisy, the Malaysian Beauty..” The point was, you couldn’t simply write your name, you were obliged to come up with something a little more substantial and literary. I’m sure I failed at the task, but the mere site of their hopeful smiles only added to my own. It was in KL during the walk up to that match that I met Peter. He was in imposing form, probably 6-6” in his stocking feet, and forever branded with a chessie cat smile. Born in London, he left his cockney neighborhood behind in his teens, heading to Australia where he took up photography. 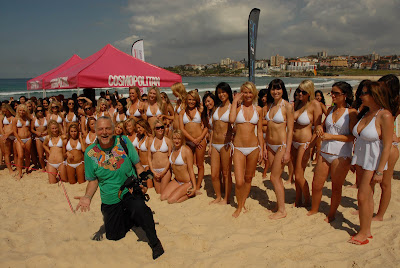 In a time when ‘paparazzo’ meant something more than just sleaze and in-your-face-mobbing, he was creative and colorful. His first big scoop was donning a medical uniform and walking into a hospital room where a distraught Marianne Faithful was getting over an emotional downer with then BF Mick Jagger. Doctor Carrette, walked in, made a picture of her in bed with the camera under his gown, and walked out, and promptly sold it to a London tab for enough money to make him think it was time to really give this picture thing a shot. He eventually became known as the ‘granddad’ of Australian paparazzi.. at a time when it didn’t’ have such a terrible connotation. Not content to just sell pictures of starlets and stars, he often created some of those “I can’t BELIEVE it” feature shots of --- well, basically nude and semi nude models on the beach. By the score he would find them and line them up, and living on Bondi he never worried about a backdrop. Just hop down to the beach, line up twenty five cute ladies, and he always include at least one shot of himself. No email from Peter was complete without at least one shot of him “at work.” Pete was a special guy. He loved hooking up his Aussie pals with me in those days when the cramped little apartment in New York was home. Virginia Hey (she was the Amazonian She-girl in Mad Max), Jack Thompson ( the lawyer in Breaker Morant), among others, counted themselves as friends of Peter Carrette. And lucky they were for it. His heart was huge, his smile enveloping, his gusto and energy without limit. And when the news came just a week ago, that he’d apparently had a heart attack at home while knocking out a memo on his computer, the sadness of his passing seemed to be without measure. I loved that laugh, that Cockney sensibility, that desire to always lighten a room, and life will be just a little sorrier that he’s no longer here to grace us with them. We’re just sayin’…. David
Posted by Iris&David at 12:31 AM