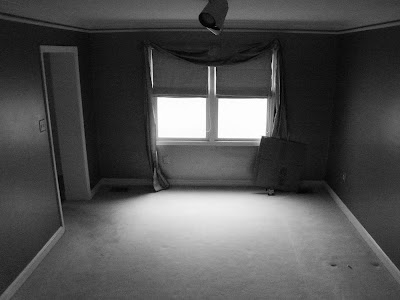 the Dining Room..... after the move

A few days ago, in the middle of our moving mess, I thought about writing a blob. I knew exactly what I wanted to write. In fact, I even wrote the first sentence, which went something like “there was a time…” Unfortunately, I think I left the idea somewhere in a box in one of six places we have stored all our worldly belongings. And again, unfortunately, it is going to be impossible for me to retrieve any thoughts or any worldly possessions for quite some time.

Anyway, it occurs to me that I should probably try to write about the move, about which, we did not tell everyone we wanted to know. There are a million reasons why our dissemination of information sucked. First of all, we put the house on the market with expectation that it would sell in a timely manner. Second, we sold it within two weeks of when it was listed and did not have the slightest idea of where we were going to move. It was simply too hard to answer the question, “well, where are you going?” without having the slightest idea about what to answer.

Third, I was spending all my time trying to get ready to move 25 years worth of things (and we should never forget they are only things), while trying to work in NY and seeing the kids in Massachusetts. Fourth, we were clearly in denial about the ending of an era which included adding room after room to fit our lifestyle, parties for every occasion, dinners at the kidney shaped table, events, of all kinds (from politics to karaoke, to holidays real and imagined), photos in the studio, years of children’s growing up drama. This was the place where my son told me that he thought he had sex, but asked me if I could confirm it. And the place where, when the weather prevented school from opening my daughter and all her friends did a four day marathon of “Angels in America” without ever getting out of their jimmies. Long after the snow cleared, and other parents said their children should come home, the kids were still happy to be camped out in the living room.

Fifth, I didn’t have the energy to deal with another loss – or for that matter, cleaning out another house and giving or throwing away things that, at one time seemed very important. And lastly, there are many wonderful friends to whom we never want to say goodbye. People always say they will come and visit or keep in touch, but unless they are as relentless as the beloved photojournalist who shares my life, or me – it usually doesn’t happen. And by the time we have a place to which we can invite people and to where we can gather everything in in one structure (without boxes), people may not even remember who we are or were.

Therefore, I apologize for not calling people back in a timely manner, for not sharing the move information with everyone who should have been told, for not following up or through on projects that remain important (to the whole entire universe), and no matter how sensible, for not wanting the era to end.

Oh, now I remember. There was a time when my mother and my aunts went to the supermarket in their house dresses, with their hair in curlers, and but wearing their mink coats. There was a time when looking forward seemed such a big job and looking back was right there. There was a time when my brother was just a pain in the neck. I would see most of my cousins on some holiday and the idea of children was so remote it was laughable. But that time has come and I gone. The great grandchildren have the furs worn every morning to the supermarket. The future just isn’t as far away as we need it to be. My brother turns out to be amazing, a kind and generous human being who I would like to see all the time. My cousins (and a few good friends), have been a loving generous support system – right there to see us through what have been pretty difficult times. And, of course, now, I cannot imagine my life without my children and grandchildren. 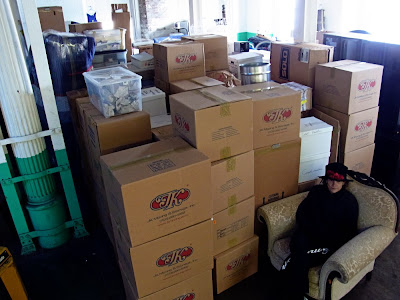 the stuff in storage....till...
“Think of this as an adventure,” many people have suggested. Good idea, right!? Maybe when I can take a breath I will. Right now it’s hard to get past the mountain of boxes. Anyone want an old 78 record player or a shoe chair. We’re just sayin’.. Iris
Posted by Iris&David at 1:46 AM

Just a note to tell you how much I enjoy "We're Just Sayin..." I try to check it every few days and it has migrated to the Bookmarks Tool Bar so I don't forget about it. I know they are your stories, but there is so much in them that I (for one) can identify with that sometimes it seems as if I am part of the story.

Keep those entries coming. Don't worry too much about having boxes and belongings scattered to the four corners. Carpe diem and enjoy each days as it comes.

If the weather ever warms up again, I will renew my efforts to get you out to the west Bronx to Wave Hill.