When I talked to Rosalie yesterday I promised her I would write an upbeat happy blob today. So, I am going to try to turn what would ordinarily be a sad story into a happy, happy, contribution. 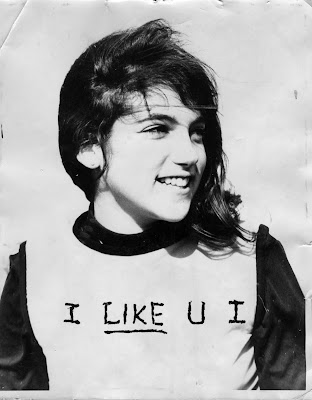 Anyway, Coach Mol made us all feel comfortable about bodily functions and cleanliness discussions-- not necessarily at the same time. He showed movies and gave us books and occasionally he would diagram a football or basketball play. It was not an easy time for me because my dad was losing his ability to be mobile and I spent a great deal of time in a rage -- although I didn't know why I was angry at the time. I just was. And for whatever reason, when I was in Coach Mol's class, he made me feel like someone (not in my family) who really cared about me, how I felt, what I thought.

One day we were doing some kind of project which required paper and glue. Someone dumped glue on the floor. The Coach thought it was me. It wasn't. But I thought if I didn't take the blame, Stevie or Freddie would take the blame. So, there I was wiping the floor with a dirty rag and the Coach, trying to be funny, said I wasn't doing a good job. And that's all it took for the rage to return. My pal had betrayed my good deed. "It isn't good enough!" I yelled. And then I threw the gluey rag at him and fled to the girls room. Eventually I came out and there he was waiting at the girls room door. "I didn't do it," I said.

And he said, "I know that now, and I am so sorry kid. Sometimes adults make terrible mistakes, and what's really important is for you to accept my apology -- and never give up your sense of injustice.”

It was a lesson that stuck with me my whole life. You can look for injustice wherever, but never be afraid to admit you are wrong, or to apologize for a mistake.

The coach remained my pal throughout high school. He always called me “kid” and continued to be totally supportive of whatever crazy decisions I made. He was a Marine, and a rare human being. Of late, having been sick for quite sometime, he was living with his daughter in Ohio. I spoke to him right before Christmas. “Kid”, he said, “never lose hope. I am so proud of you and I know that whatever you decide to do, you will always make a difference.”

In the sadness about his loss, I feel comforted that he was surrounded by people who loved him and that he was always spirited and upbeat about life and death.

So Ro, I am sorry I couldn’t be absolutely happy, happy, but having had the benefit of the coach’s wisdom for so many years, I can’t help but smile whenever I think about the person, how centered he was, how he influenced so many lives, and how he loved me despite my politics.
Posted by Iris&David at 11:44 PM

Oh izie, that was lovely. When I heard he passed...the first thing that came to mind, was walking by his classroom and seeing my brother hanging from that hook above the chalk board, watching what then was a small, cute freckle faced kid, kicking his feet and me crying. He took him down. He was always just a perfect gentleman and all through High School, as a cheerleader, he was always someone i looked up to.
Thanks for bringing back those joyous memories. He was the "Bomb"

I had heard about coach Mols health declining about was saddened. I was another student that fondly recalls the man and his influence upon so many. The 60's were troubled times in our country with war and racial problems. Mr Mol once told me that I shouldn't let opinions by others keep me from making choices I felt were right. Telling a young Black man something like that was a "huge" stepping stone for me. I was being encouraged and respected. I have been blessed to have two such men to give me reinforcement and care.
I now am and have been a Phys Ed and Health teacher for over 40 years,I can only pray someday I will be remembered nearly as well as my mentors. Mr Mol you were a man for all to remember and you are missed.
Harold