The Aces of My Life

When my son was a little boy he had a guinea pig named “Ace”. She was a cute little thing and he loved her. Ace was around for quite sometime and he never got tired of her running around on the little wheel or romping in her cage. Children do get attached to their pets, and if they are in charge of the care and feeding, they usually develop a real sense of responsibility. He did that and took very good care of her.

Sometimes things don’t work out as planned. For example, my daughter,. wanting to be just like the stories I told her about her brother, wanted a pet. Rather than experiment on a dog, cat, or parakeet (I had a parakeet -- Tweety--how original), when I was a kid that , at his insistence lived in my brother's room. It had a nervous breakdown. When we took it back, the pet store owner said he had never seen anything like it. In addition to Tweety I had several puppies, but my mother always gave them away before I got attached.

Anyway, my daughter named her fish Ace. Unfortunately the fish died in its little glass bowl before we got it home. I truly didn’t know what to do, but I thought the truth was the best route. We took the fish to her room and I said, “Honey, your fish has died and gone to heaven and we probably should bury it in the garden.”

“Why Mom?”,she said, “fish don’t really do anything, so let’s let it float around for a while”. When it started to decompose, I flushed it. 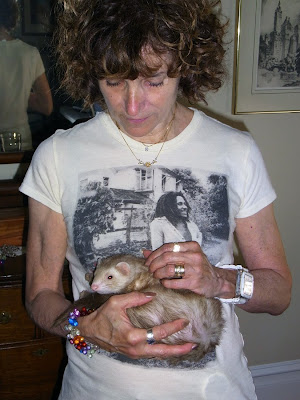 This week has been a week of unusual ‘Aces’ and unusual pets, which made me think about my kids and their pets. (My daughter has two kittens, my son a cat.) First of all, we were traveling to Salt Lake City for the wedding of a daughter of dear friends. When David called around about renting a car, all the recognizable places were so expensive that they cost more than our airline tickets. But David is good at travel and, after many hours of research, he found a place called ‘Ace Rental”, which was not exactly on the airport grounds, but at least it wasn’t halfway back to Virginia. The car was bright red. When I say bright, I mean we could almost see it from the airport -- miles away. There was certainly no question about losing it in a parking lot. 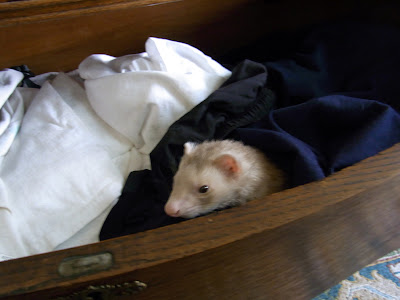 Frankie snuggling in the underwear drawer
When we were on our way to our friends, (Rick and Janice), Janice called to advise us to be careful when we opened the front door because Frankie might be out of his cage. And if Frankie saw an opportunity to escape, he wouldn’t miss it. And if he escaped, we would have to chase him until we caught him because he was not capable of finding his way home. Frankie is the ferret they inherited when their daughter moved to an apartment that didn’t allow pets. Now, I’m not crazy about wild animals, but Frankie was hard to resist. In the morning he would come scratching on our closed bedroom door. When we tried to ignore him, he pushed against the door until it opened and dove directly into David’s suitcase. We would rifle through the clothes, find him and put him out the door. But he was not to be denied, and returned to scratching almost immediately. I suggested that we call our host upstairs and tell him we were under attack. But it was highly entertaining, rather than annoying. Frankie just had a charm that, if you haven’t ever been intimate with a wild animal, is difficult to explain.

I know, that Frankie had nothing to do with the Aces, but it did have to do with getting attached to pets-which is a stretch but only a little one. Moving on. When we were making arrangements to get picked up at Newark, we had to find a limo service that would take us to Boonton NJ, where we had parked our car. And wouldn’t you know it, we found a service called, Ace limo. It was just too coincidental to ignore. We called Ace and tried to negotiate a price. (The price they quoted for a 20 minute ride was more than the air tickets and the rental car combined.) We thought that our luck was pretty good when we stuck to the Ace theme, but they wouldn’t budge on the cost. And, despite our desire to stick with all the Aces we could, it was simply too expensive. 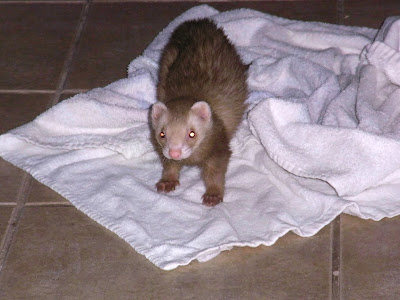 Frankie surfing on a beach towel
I’m sure at this point you must be asking yourself, what the heck is the point she is trying to make? And to be fair to the readers, ,there doesn’t always have to be a point. Sometimes, I just feel like writing about special relationships, nice memories and having a few laughs. I assume we're all pretty tired of health care. If you hear that scratching at your bedroom door, go ahead and open it. It’s probably an Ace in waiting. We’re just sayin’… Iris
Posted by Iris&David at 12:27 PM

Iris- that is a hot t-shirt, where can i get one? one love!