No Bags on the Bed 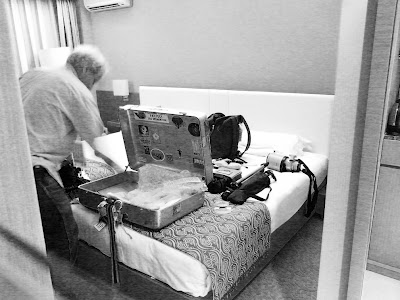 The other day, I got home and was relaxing when Jordan came racing in to remind me that there was a “No Bags on the Bed” rule. When you live in New York the rules for the way you live are a little different – and mostly germ related. The ‘no bags on the bed’ rule has to do with the fact that you put your bags on the ground and on the floor of the subway (where there is no shortage of filth – I won’t go into detail), then you go home and put those very same bags (the ones you dragged through the muck of New York), on your bed, introducing the vile elements to the place you rest you head at night. It’s a good rule and one I have reminded the world traveling (imagine the crap on his bags), photojournalist on more then one occasion.

The rules for living in New York, unlike the rules for living in Washington, do not include being patient while you are inconvenienced by a Presidential motorcade or two. In Washington people are used to having to drive miles out of their way when the President leaves the White House and all the surrounding street are closed. So this week was enormously stressful for New Yorkers because they were inconvenienced, not only by our President’s motorcade, but by line of cars for every Head of State in the world, maybe even the universe.

In addition to the motorcades, the police presence, which is usually not pervasive in NY, was really in your face – with machine guns and battle gear. I don’t know how the prospective terrorists felt but the rest of us were scared to death.. It brought back memories of times past. Like the first time I went to Eastern Europe, before we got on the plane, we were taken to the middle of the tarmac, and surrounded by soldiers with serious looking weapons. We were told to pick out the suitcases we had put through baggage. We moved all our bags from one pile to another and it was clear that no bags were going to get on the plane that were not identified by a passenger.

That was the first time I noticed that there were well armed military dealing with the ordinary public in a hostile way, as opposed to an treating them like they were the enemy. But I digress, (what else is new). The police were everywhere – intentionally visible. And I guess it worked, because there were no terrorist incidents during the UN General Assembly (other than, of course a few speeches in the General Assembly.) On the other hand, there were a number of abuses of power in Pittsburgh. World politics – the G20 --moved to Pittsburgh after New York – I know, world politics and Pittsburgh is an oxymoron. My favorite story was about the woman who was riding a bike and when she happened to ride by the protests, she was assaulted by a police officer. She was so angry about this attack, that she threw her bike at him. So naturally, this 300 pound thug in blue, beat the 120 pound biker, to within an inch of her life, and arrested her.

What does any of this have to do with the “No Bags on Beds rule”. Nothing specific, but it does have to do with how we accommodate to the places we live. In Virginia, I hardly ever take my shoes off when I walk into the house. In NY I would never think of walking into my apartment without taking my shoes off –and we ask everyone who visits to do the same. Again, this has to do with dirt and germs (and the white rug I stupidly purchased when we bought our apartment). But there are also other issues, some about safety, eating out, driving, and the social schedule. Not that one is better than the other, there are just different rules.

When we were growing up my mother said things like “you never move on a Tuesday,” “you must bring salt, sugar, and a broom into the place where you are going to move. “ “You never throw things at a pregnant woman (because the mice would eat your clothes).” And no hats on the table –ever. These were superstitions as opposed to rules but, at the very least, they were incredibly entertaining. And, in a strange way they were not much less sensible different than no bags on the bed. We’re just sayin’…. Iris
Posted by Iris&David at 12:01 AM