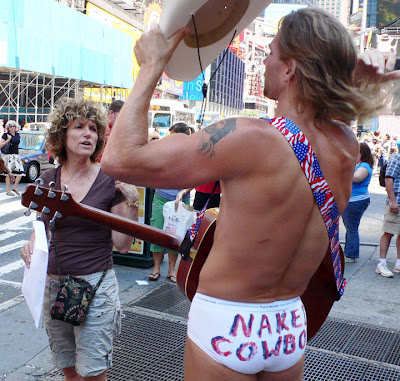 Sad News. The Naked Cowboy has dropped out of the Mayoral race in NY. There were too many requirements and the Board of Elections doesn’t have a sense of humor. In case you have never seen “Naked”, you can usually find him in Times Square and you will know who he is because, while not totally naked, (he wears undies, a guitar, and a cowboy hat), he is almost without clothing. Robert, that is his actual name, does have a degree in Political Science and is quite intelligent. Let’s face it, you have to be intelligent to actually make $100 – 250 thousand dollars, standing in Times Square as a Naked Cowboy.

It’s too bad that he didn’t have real campaign people working with the bureaucracy because the best campaigns are always those that are spontaneous and have a sense of humor. To be more specific, the best campaigns are always those where the people running the campaign have a sense of humor. And sometimes, it’s much better when the Candidate is not involved – even better if the candidate doesn’t know they are the candidate.

For example, the best campaign I ever worked on was a Presidential campaign for the former CEO of Chrysler, Lee Iacocca. After Lee saved Chrysler from total disaster (where is he when we need him), he became a kind of American folk hero – especially in areas where there were Chrysler factories or dealers. It turned out that when we look for Presidential qualities, being a folk hero or being an inspirational speaker are two good ones. But Lee Iacocca didn’t want to be President. And again, that was just fine because it turns out that as long as you don’t want to be President, and you are not involved in any campaign which promotes your candidacy, people who want you to be President can craft a Presidential campaign and do whatever they want to do.


Anyway, a group of us decided that Lee would be a perfect candidate and we would start an “Iacocca for President” campaign. There were only four or five senior staff. (There was no junior staff). A press secretary, two fundraisers, a policy wonk -- and the campaign manager was whoever had an idea that was visual and would get press attention. We created a number of fundraising and press events and we raised about $50,000 – which we used to entertain ourselves and the press. And maybe we bought placards and stationary – but maybe not.

We were having a great old time until the first call came from Detroit. It was someone in Iacocca’s office informing us that Lee did not want to be President and we needed to “cease and desist”. We said we would not, because to be honest (you know how I feel about being honest), we were simply having too much fun.

The campaign persisted for weeks but since we “Senior Staffers” could not dedicate ourselves full time, the staff meetings were infrequent. So, when the next call came from Detroit, there was no one available to respond. They thought we were trying to avoid a confrontation but we just didn’t have anyone on the campaign phone. And I guess they decided that we were not going to respond to any requests they made, unless the requests were made in person.

Two thugs arrived at our campaign headquarters, which also happened to be the lobbying firm of a member of the Iacocca Senior Staff. When he saw these guys he put out a call and we all left our jobs and miraculously appeared to meet with the thugs.

It wasn’t pretty. They threatened and we cajoled. They screamed and we guffawed. They said they would take serious measures to stop us, and we figured they would put out a hit on us. It wasn’t going to be fun anymore so we agreed that we would quit but we would have to have a press conference to explain the situation – and we had money left in our entertainment budget that we thought we would invest with the political press in case we were ever working on a real campaign and needed some coverage.

It was a most wonderful experience and, in fact, we did make good press contacts, had substantial fun, re-learned all the rules and regulations for a Presidential campaign, and realized that politics without humor is like a ship without water—or some better analogy. We’re just sayin’… Iris
Posted by Iris&David at 8:04 PM