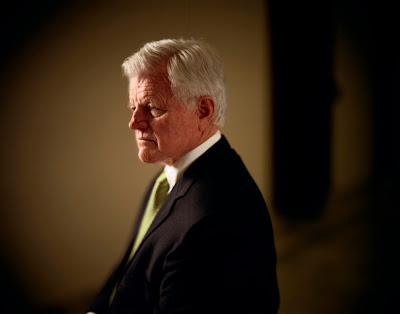 Poor Dominque Dunne, what a stupid day to die. Such a heartbreak. It’s like when I used to shuttle back and forth from DC to NY. There were always VIP’s on that plane and I dreaded the idea that if the plane went down the papers would report that some ,’big deal’ was killed in the crash and I would simply be an ‘”also on board” – and that was only if I was lucky and whoever was writing the story was in kindergarten with me. It’s no different then when Farrah died and, just her luck, Michael Jackson steeped in and that was all the news.. Oh well, as my mother would say, “what is, is”.

For all his wealth and position, Ted Kennedy didn’t have an easy time of it. Sure, some of that was his own fault, like the time at Harvard University when Mr. Kennedy was suspended for cheating on a test. But look at all the family tragedy he endured – his son had cancer, his wife (who he later divorced) was an alcoholic, his brothers were murdered by maniacs, and his aspirations to be President ended in Chappaquiddick. Admittedly, he did make stupid decisions. And there were additional difficulties. In fact, the first time I paid any attention to who he was (other than the President’s brother) was not when he was elected to the Senate, but when he was in a plane crash in Boston and broke his back.

But, despite all the problems he encountered, he remained a loyal, courageous, principled man who survived so much controversy, and made any number of comebacks in order to do what he thought was good for the country. And thank God he did, because all his work, over the years, had an enormous positive effect on the lives of millions of people. In the 1960s he worked on civil rights and in 1965 he sponsored immigration legislation that overturned rules favoring immigrants from Western countries. In the 70’s it was poverty and human rights which he played a key role in; and Title IX, the 1972 law aimed at ensuring equity between men and women's educational and sports programs. There was a focus on disability in the 80’s and in the 90’s the Americans with Disabilities Act was passed. There were also several minimum-wage increases; and even President George W. Bush's No Child Left Behind Act.

And in all likelihood, he could have been the President. His Waterloo was Chappaquiddick Island, when in 1969, a campaign aide who was riding in his car, died after the car crashed off a bridge. He foolishly waited hours before he reported the accident and no one, except a few of his close staff who were on the Island that night know what actually happened.

In later years, there was again more controversy with episodes like the rape trial of his nephew William Kennedy Smith and the post-Watergate campaign rules of 1974; Nobody is perfect. And through all of it, he was consistently able to pass legislation and lead the Democratic party

But my own personal favorite story, (because it involved my own person, and is an example of how dedicated his staff was), happened in 1980 when there was an “Anybody But Carter” movement and Kennedy emerged as the candidate who could beat him. He was not able to pull it off. Unfortunately, it created enough animosity with Carter that despite Kennedy’s popularity, the Carter people were not going to let the Senator speak at TV prime time during the convention. Carl Wagner, who was a long time Kennedy supporter, was asked to negotiate this with the Carter people. It was clear to all of the people who worked on the Democratic Convention, that Kennedy would not settle for anything but prime time. The only question was how would they do it. We got our answer soon enough. Carl came into the meeting with a very noisy frog clicker. It was so distracting that about ten minutes into the negotiations, Hamilton Jordan asked him what the hell he was doing? Carl said, “I just wanted to see what one clicker sounded like because I have 25 thousand, which, if the Senator doesn’t speak at prime time, will be used during the President’s acceptance speech.

Needless to say, Kennedy did speak at prime time and when he was told about the negotiations all he said was “I’d like to have those clickers to use when we are arguing legislation in the Senate”.

Teddy’s death is a serious loss for everyone – including people who don’t agree with him, He always conducted himself with dignity and like a gentleman in the Senate. And regardless of how you felt about his issues, he was always honest, never lied, and never wavered from his love of this great nation. We’re just sayin’…Iris
Posted by Iris&David at 12:47 PM

Hope it's okay to link to it?:

I was following Kennedy around in Pakistan and India in 1971 for Life Mag as he saw refugees fleeing from, then, East Pakistan. After a long day of visiting refugee camps, I gratefully fell into bed at midnight. 3 hours later I awoke to Kennedy standing over my bed ordering me to get dressed...that we were going to another camp where new refugees had arrived from East Pakistan. I mentioned that it was 3am and he replied that refugees didn't care what time it was and to move my ass...

I don't beleive it. He was dishonest. Just like the last and current administrations in office.