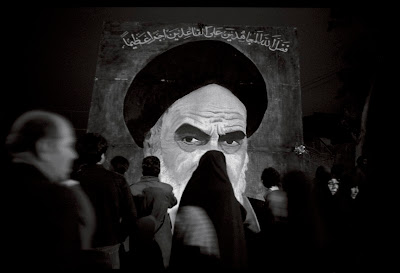 I know I probably go on and on about certain things having to do with the passage of time in a way which, for someone whose life-work has been stopping time for an instant, must seem a bit like a broken record. (Editor's note: to those of you under 35 a "record" was a 12" vinyl [plastic] disc, with grooves on it, and when twirled on a 'turntable' and played with a 'needle,' would produce a sound roughly equivalent to the sound made when the plastic was cast. A "broken" record keeps playing the same noise, as the needle is unable to escape the a certain groove. Trust me on this one: it's annoying as hell.) Yes, time, no longer available in a bottle, just seems to fill the air around us rather like a mist which has been colored so as to be visible. Time gets into all the cracks and crevices. The corner of the sofa where all those old coins end up, the edge of a wooden drawer, the tines of your toothbrush. Time is unrelenting. In spite of really bad sit-coms, you should understand that time only moves one direction: forward, the same direction as the steam-roller which is about to flatten you -- so hop out off the way.

In the next couple of weeks, my new book "44 Days: Iran and the Remaking of the World" is going to be published by the Focalpoint division of National Geographic. It's quite exciting for me, really. In the era that finds magazine assignments drying up at an alarming rate (the scenario is something like this: internet steals advertising money from print media, magazines and newspapers in particular.. resources begin to dry up in magazine photo departments; economic downturn exacerbates the effects of this resource wipe out, causing many magazines to produce only a fraction of what they did even a year ago...) books and exhibitions, while a bit clunkier to produce and manage, provide a very different way to get the intent of those photographs -- to tell stories -- out to a viewing public. The fact that the photographs in the book were made 30 years ago (some, actually 36 years.. the Shah's visit to see President Nixon in 1973 was actually considered a "News" event) and have been cared for in that three decades, gives me great pride and pleasure. The toughest thing having to do with keeping a photos in an archive, is actually keeping them and maintaining them. It gives you the same appreciation that you might have seeing a library maintain its books for the public over a long period of time. It's very easy for things to disappear, fail to be returned from clients, to just fall behind a desk and remain there forever. So, when we (Contact Press Images) started to put it all together, it was satisfying beyond belief to see that the very nearly the entire archive was available and ready to go. So many of my friends, particularly those who worked for wire services (AP, UPI) over those same years, have virtually nothing of their own archives. Traditionally, the wire photo editor would look through a roll of film, mark the 'keepers', and cut one additional frame on the right and left of it, and often just toss the rest into the trash. Horrible to think about, particularly in light of the fact that what is important now on a roll of film, could very well be something which had no obvious meaning when it was shot, but was part of the photographer's vision.

The Digital Journalist, one of the longest running web'zines dealing with the press and photography, did a wonderful gallery in this month's issue. It includes a text I wrote to try and describe what it was like to produce the work, and eventually get it published at a time -- now -- when there are new rumblings in the streets of Tehran. In many ways it is not without irony, that many of the people in the streets I photographed 30 years ago, are now on the side of those who want to stifle dissent in those same streets. They may have outlawed demonstrations, but they cannot outlaw irony. The book is a collection of black-and-white (ode to Tri X!) and color (ode to Kodachrome!) and I'm very happy with the way it's turned out. (Shout out to Jeffrey, Jacques and Robert..) Available on Amazon and other fine stores... We'll be doing a number presentations on the east coast and (hopefully) the west coast, discussing the work, over the next couple of months. Check this site for book events... and remember. It not only seems like 30 years, it IS 30 years. Nearly half a lifetime. We're just sayin'... David 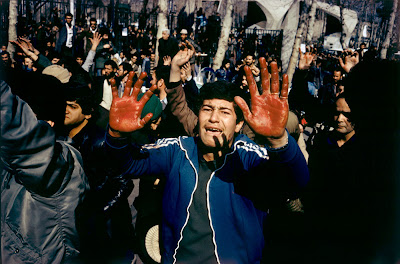 p.s. If you know any one at a Middle East Studies (for example) department at a great metropolitan university or other institution of higher learning, and think they might benefit with an evening of discussion on Iran.. please be in touch!
Posted by Iris&David at 9:03 AM

David,
I've been waiting anxiously for your book - glad to hear it will soon be available. On time only going forward, I've been giving some thought to the look back (billions of years)in time that astronomers are getting with telescopes like Hubble. Can we see eternity (all of time; past, present and future) from here?
Reeder

The right shooter, at the right place and time.. I also suffered from lost imagery, and too familiar with the cutting room floor, so to speak. I look forward to this book! Bravo!

I found your comment about how the wire services treated unused images interesting. I spent 4 years in the Marines as a photographer between 1965 and 1969. Because the Marines never understood the value of all those unused photos from a photo shoot I would keep the unused negatives for myself.

Heck the Marines didn't like the idea of the 35mm camera. They preferred the 4x5. Imagine carrying a 4x5 into combat.

Anyway when I went to Vietnam for the Marines I was used to their policy of keeping only the one negative that was used for the press release and I would keep the rest for myself. I'm glad I did.

I wasn't until the 90s and the WEB that I finally posted by photos for all to see.

Looking forward to your new book.

Dear Photoessayist.. boy, would i love to see the stuff YOU kept out of the Marine rotary file... where is the material on line? can you share.. it sounds like something very much worth a little web trip... thanks for reading the blob...

You Would? OK just go to www.photoessayist.com/vietnam.

Let me know what you think.