Tonight I relived one of those moments which was a highlight of the last few years. Iris and Jordan made a great dinner, and the warm kitchen was just what the night needed to ward off what has become the first day of winter. Dinner, I might add, was a quite delicious platter of slow cooked short-ribs. Beef short ribs, which I first discovered as “Kalbi” in Korea in the 70s, have finally made it out of the league of under-appreciated cuts, and are becoming one of THE hot dishes. It takes a lot of slow cooking. There is no “grill for ten minutes on each side” with short-ribs. You have to invest a bit of time, but the way the succulent meat falls off the bones after 5 or 6 hours of cooking, make it so worth while. 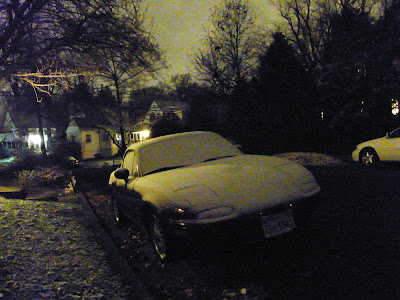 Winter arrives on Upton St.
And we did a practice run on latkes: yes, even though we only make then a few times a year, they never taste anything but great, and given the fact that you CAN occasionally forget how to make them, a refresher course a few weeks before Hannukah is smart. They work very nicely with the short-ribs. Normally we have some kind of brisket with the latkes, but this year, I suspect the brisket may be sent to the minor leagues as we take a chance on the American Kalbi. Actually, that would be a great name for a new Korean/American cuisine fusion restaurant. For years I have wished there were some local version of a wonder Korean dish I used to have in the old neighborhoods in Seoul (before they were kiboshed to make room for new skyscrapers). So-Gum-Gui was a wonderful little barbecue/do-it-yourself concept. You take very thinly sliced pieces of beef, about 2x3” or so.. grill them over your fire (each table has its own little grill), and when done, wrap in lettuce leaf with slices of raw garlic (those of you who read Sho-gun know what I mean) and a spoonful of delicious white rice,then dip it into a sauce redolent of sesame oil and salt and pepper. Then stuff in your gullet and enjoy immensely. We didn’t load the short ribs up that way tonight but with a trial vat of Nouveau Beaujolais (only so-so this year) -- it was a great dinner.

After dinner we replayed one of those wonderful dad-daughter moments. Jordan and Melanie (her bestest bud from the time they were 3 and already getting into trouble) announced they would be going clubbing, and could I drop them off. It’s the kind of sensible request which you love getting. It implies several things: a) I’ll probably be home. b) I don’t think I’ll be in a very good state to drive a car, by the end of the night. c) Just don’t linger too long when we get out of the car so it won’t look like a 9th grade dance drop-off. The girls looked pretty “clubby” when they walked out the door. It is, from the point of view of a father, only a mildly wonderful thing. I mean, it’s not that I want them looking horrible, ugly, or too messy. It’s just that being a guy, I sort of remember the way guys are. But I have to get it through my head, they aren’t 9th graders anymore. Mel turned 23 last week, Jordan will in February. When we were that age, well, things were a little different. Iris was married before she turned 21, student teaching in Massachusetts. I was living in Miami, working – or trying to – as a freelance photographer for TIME magazine. I never was one of those guys who would have happily bought two cute girls a drink at a bar. I mean, I would have, if they would have talked to me, but it was always a struggle to make chit chat (hard to believe, I know.) But when I did go out, it was usually to Big Daddy’s, a sports bar in Miami Springs. A lot of guys who worked in and near the airport, buying a lot of drinks, and wishing all the in-training PanAm stews who trained down the road a mile,would show up. Well, mostly they didn’t.

Our girls certainly know how to buy their own drinks, but I guess if I were a young freelancer working in the DC area and ran into these two smart, humorous & attractive young women, I’d buy a drink just to know a bit more about them. Jordan appeared on TV -- making a brief appearance on All My Children last Wednesday. She taped it three weeks ago, and unfortunately they cut one scene. 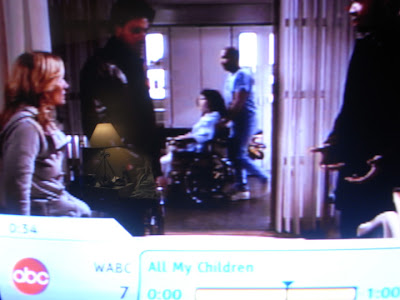 But, she did make an appearance in a wheel chair (I forgot to ask if you get paid more being ambulated.) But these kids are definitely living a world far beyond our own from that age. It actually took me until I was well into my 30s to admit to my folks on a rare trip home to Salt Lake that I “might not be home tonight.” I surprisingly ran into an old school pal, and ended up spending the night with her at her place. That call to my folks, at about 10 or 11 (late enough to engender worry when the phone rings in that nighttime silence) was one of the toughest I have ever made. It was one of those moments when I had to actually admit that I was, in some small way, an adult, and able to make overnight decisions all by myself. My mom, who was quite cool about the whole thing, just finally asked, “well, just let me know, are you coming home or not?” To which I think I mumbled something Jackie Gleasonesque like “humina humina humina…. Er ah.. no, I don’t think so.” 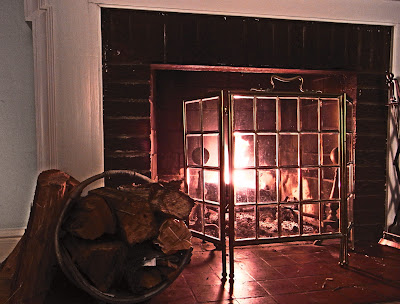 It would have been a whole lot more convenient if I could have asked my dad to just drop me off, and while he was always great at doing favors, it just wouldn’t have seemed right. I suppose we’re always happy to hang on to those little things we remember, and cherish. I’m happy, frankly, I can still fall into the category that my kid feels that being dropped off by her old man isn’t such a bad thing after all. It’s midnight now, and I’m wondering how late I have to stay up and hear that door open downstairs. We’re just sayin’…. David
Posted by Iris&David at 12:02 AM

David,
I spent about six months in 1970 living with the Korean Army and while I don't remember the pronunciation as "So-Gum-Gee" I do remember that what you described was my favorite dish at the "officer's club" with my Korean friends - they liked to wash it down with scotch as I recall.
Having raised three girls I can say the concern never ends - and now I have grandkids to worry about. Remembering your behavior as a teenager and a young 20 something can be a curse!
Reeder