Sometimes I don’t understand people I really like. For example, Barney Frank recently said that he didn’t think the future President was moving quickly enough with the transition. Obviously, Barney has never worked in personnel – nor does he remember the last Democratic Administration where, by this time, we had filled at least ten jobs. Not counting the Cabinet appointments. Never mind, sometimes people just have to say something. Speaking of people, and I know this is a stretch, when George Bush determined that the Ambassador to the UN shouldn't be a Cabinet post (because it was under Secretary Albright), it should have been a signal that he didn't think the UN or the rest of the world was important. It was saying the same thing that so many people say at sports events when they hold up their fingers and yell, “we’re number One!” As it turns out, and with regard to the all the many crises - we turn out better described as number Two - and I mean that in the nicest possible way.
A few days ago he announced Richardson as his Secretary of Commerce. What a hoot. Bill has had more political appointments then most people have had tooth fillings—but this is terrific. A well-versed, talented, Hispanic Border State Governor in charge of the Economic development of the USA.

Enough criticism for a while, let’s reflect about the holiday season. They lit the Christmas tree at Rockefeller Center last Wednesday. I didn’t go to the actual lighting, but I did walk by to see what kind of people stand, for hours in the freezing cold, in police designed steel corals – even just looking wasn’t easy because, since the revelation that terrorists were planning another possible attack, everyone is suspect. Anyway, like the nutty fathers in “The In-Law’s” I bobbed and weaved in a serpentine fashion between 5th and 6th Avenue and 49 to 51st streets, until I got to where I could see the tree. Even unlit it is a regal structure. I have often wondered how, exactly, they pick the perfect tree. Do people call in and offer their trees or do NBC farmers wander aimlessly around the country until they see what they think would look good at Rockefeller Center. Not that it matters, this tree didn’t fall in the forest – it was happily chopped down, but it’s interesting because we had big trees at my parents’ in New Jersey (not as far away as most places from which the trees come), and I never thought of offering them to the plaza.

So what kind of people go to the tree lighting? The police officer I asked said they were all people from out of town. But that turned out not to be true. I did find a few New Yorkers who said that, like with the Macy’s Thanksgiving parade, they have made it a family tradition—unless it is raining. Jordan and her friends went – but they found a police officer to escort them to the VIP seats (ah yes, it is genetic). There were also couples, who wanted to get engaged at the tree lighting, and just plain folks who just wanted to see the show. In New York, people like to go to free entertainment venues and at this one the talent was memorable. At one point I was almost tempted to stay—I was there early enough to get a pretty good view, but you mostly couldn’t see the stage and the lighting so that was too stressful a decision and I just couldn’t make it. Besides, I was having too much bob and weave fun and it was too cold for this southern belle. (OK Northern Virginia isn’t really the South but I do like grits).
Anyway, I made my way home on the subway, which at this time of year, is more entertaining than usual. So far, my favorite subway entertainer is a guy who sings a few off key songs at the 53rd street stop. It is not that he is so bad it’s good. He is truly bad—there is no question about that. But I like him because he is incredibly earnest about having no talent. Not only does he want contributions he wants people to listen to him. If you happen to be standing on the platform with a friend waiting for a train—which is of course the only reason you would be standing on the platform, except to sing -- he will move right next to you and sing louder. It is however, early in the season, so I may have other picks but right now he’s in the lead.

The holiday season is usually a time for glee –even on the subway, It is different this year. People seem reticent about joy. Maybe it’s because so many are suffering, or maybe because they don’t know what’s coming next, but there seems to be fewer people giving change or dollars to street musicians, or beggars. When I was walking with my friend Laura last week there was an older gentleman asking for change in front of the McDonald’s. We both searched out pockets and gave him what we had. When we walked away, Laura who is the Queen of information about everyone in the neighborhood, told me the guy was a former executive a Lehman Brothers. He wasn’t, but I believed her because there are so many executives out of work. What is happening in this country? And speaking of what is happening, the “big three” car executives have agreed to give up their salaries – but what about their bonuses, isn’t that the real money? There will apparently be a bailout, but I think it should go to the people who have worked all their lives and are now suffering the consequences of all the greedy executive decisions, rather than keep the dopes in business. But what do I know? 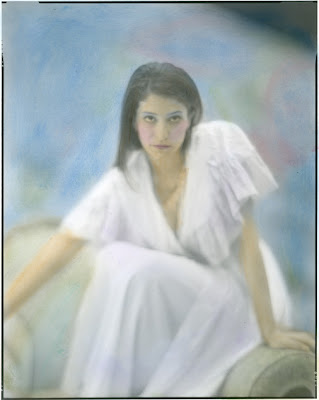 I know it’s especially important to celebrate holidays at these trying times. So we'll do our annual Jordan card and on with the Hannukah party planning—which of course won’t be on Hannukah, But a party is a party, so who cares when it is. We’re just sayin’. Iris.
Posted by Iris&David at 11:03 AM

I recently came across your blog and have been reading along. I thought I would leave my first comment. I don't know what to say except that I have enjoyed reading. Nice blog. I will keep visiting this blog very often.