A number of people have admonished me for not writing a frequently as they have come to expect. This is quite flattering – I can’t imagine who would miss my blobbing but I will try to do better. Because I did not want to be one of those people I talk about –someone who just blurts – and the results of the Presidential election were to my liking, I have tried to write about the sublime or ridiculous. Obviously there has been more ridiculous than sublime and I didn’t want anyone to think I was just silly. OK I don’t care if people think I’m silly because being silly seems to be a positive quality in this crisis filled time, but rather, I have tried not to just blurt. When I mentioned this to David he reminded me that the reason I blog/blob, is precisely so I could blurt. In short I’ll try to do better.

In keeping with our new tradition of not celebrating holidays on their actual date, as you may have noticed, we had our annual NY Hannukah party yesterday. Kerry and I carefully planned all the details. I was to bring the pototao shredder from Virginia. (it’s not a 'cuisine' anything, so I don’t actually know what to call it), but it does the job. I brought all the paper goods, Hannukah gelt, poppers (yes they are a British Christmas item but they are also fun for any celebration because you get to read stupid jokes, wear paper crowns, and open gifts). And I brought twenty pounds of potatoes – eight pounds more than we actually needed. (It still made 60 latkes for 12 people). Kerry provided bagels, cream cheese lox, fruit, coffee, mimosas, Bloody Marys, assorted vegetables, and all the stuff to make the latkes. That being said, after schlepping the shredder all the way from Virginia., I forgot to take it across town. 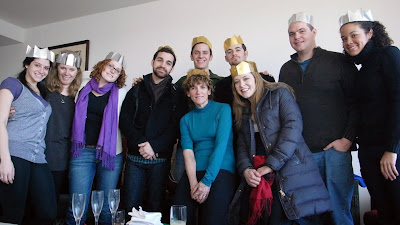 When we realized we were shredderless, a decision had to be made. Thankfully, we had not yet indulged in the alcoholic treats so we were able to clearly think through the situation. We determined that going all the way back across town was too much trouble so we would walk a few blocks and purchase a new Cuisine Art. Kerry couldn’t find all the parts for her old one, so the purchase was legitimate. The ability to make mushed, shredded, or slushy foods should never be underestimated. Anyway, it all worked out, at least until the paper on which I was draining the oil from the latkes, caught on fire. I remained very calm, merely wandering around announcing that I was on fire and could use some help. You might think I could have thrown the tray into the sink and turned the water on. That would have been true except I didn’t want to lose the 10 or twelve perfectly cooked latkes that shared the space with the fire. Eventually, Clare came to my rescue – at least I think it was Clare -- but who could tell through the flames. Kidding. Kidding. Nothing but the paper actually caught on fire, and no smoke detectors were called upon, and all latkes emerged healthy. We didn’t do karaoke this year and it is unclear whether we'll add another Hannukah celebration during the inaugural—we’ll see. See the joys of “alternative date celebrations?” You're never very far from a well fried latke. 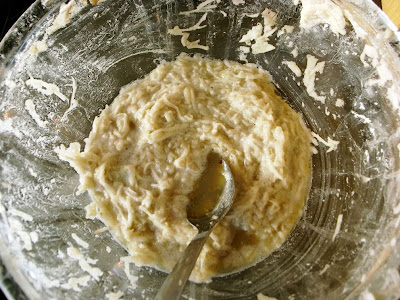 Shredded potatoes await their Latke Moment
On a totally different subject, over the past few weeks we have suffered a terrible loss. Steve and Barry’s, my absolutely favorite place to shop has gone bankrupt and are closing all their stores. Steve and Barry’s was a great place for sweatshirts, t-shirts, men’s dress shirts, baby stuff and women’s whatever. When we first discovered them, in Plymouth Ma., things were reasonably priced and they were just plain fun. Then Sarah Jessica Parker decided to sell her line through them exclusively, so they became the only place to shop for Bitten. Other super stars also invested with them, and really, there was no place else to be hip and pay moderate prices. Top o' the line gym shoes, were $15 instead of $150 – a socially responsible move. For a while, everything in the stores was $8.98. That was pretty cool and I purchased in large quantity. My hope was that they would figure out a formula and stay alive. In October, the Plymouth store closed. Then, when I was doing my discount shopping at Potomac Mills in Virginia, I noticed the 'going out of business' signs on their doors. Well, I didn’t just notice them. I was on my way through the doors and all that was left was the shelving. I was hopeful because the store at 34th Street in the Manhattan Mall was still open. 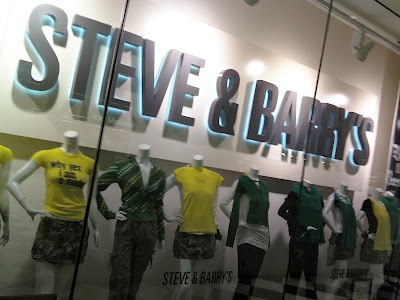 Things were no longer $8.98, but you could still buy a great shirt for $10. But it was not to be -- Steve and Barry’s is closing, forever and ever. Oh woe is us. With just what I spent they should have been able to sustain the business. It’s like losing a dear friend. Maybe they didn’t listen to my troubles or help me through difficult times, (wait, they did do that). OK, maybe they didn’t care about who I was or my dreams and aspirations– but what amusement they provided when I was in need of an affordable but worthy shopping spree. 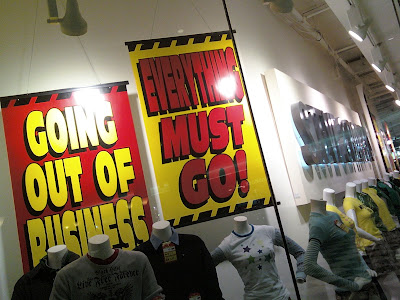 It looks like we are about to lose many of these “old friends”. Restaurants we loved, car companies and investment firms we depended on (oops, that was clearly a blurt)… The news about the economy is mostly not good. At this holiday season will we only be able to celebrate Wal*Mart and the Bank of Malaysia? It’s all too depressing. I better go to “Daffy’s” for some socks.
Posted by Iris&David at 12:19 PM

This was one of your best blog/blobs ever. Very amusing minutia. And let's face it. There is more than a minute need of minutia in uncertain times as these. I also appreciate your processing of the minutia into minute observations and then into minute brain-bits so my over-stimulated brain and sensory receiver can take a breather.
PS I notice that you are a comma minimizer.