We were just going to get a quick bite at a place that David likes quite a bit. They have giant flat panel screens, burgers, beef sliders and numerous kinds of beer. Needless to say, I am not much interested in good beer or enormous TV’s so I had never been there. Given the way we live (back and forth to NY and Boston, never knowing where we’ll wind up), there was nothing in the house for dinner and I agreed that we should go to “Thirsty Bernies” because it is very close and the weather was miserably cold. I turned on the energy saving outdoor lights as we were leaving, and if you have ever used these ‘attempts to do your part for the environment’, you know that it takes a while before they actually give off any light. We have lived in this house for 22 years and it never occurred to me that I wouldn’t be able to negotiate the trip from the front door to the car. Alas, this is why 75% of all accidents happen at home. Quite simply, I missed the last step to the car. I did, what might be described as a colorful twirl, and then down I went, first hitting my knee and then my face.

It was still too black to see anything when I hit. My fall was not without noise. I suppose there were lots of “oohs” and “oh my Gods.!” culminating in an announcement that I was bleeding from my head. David stood on the sidewalk still trying to locate my whereabouts. By the time he did, I was up, hand covering the wound, and rushing back into the house where there was some light and a first aid kit. We never made it to “Bernies”. I’m OK and very lucky. The bruise looks like David whacked me with a pretty good punch to the eye. It could have been worse. I might have lost an eye or David might actually have walloped me. This could have happened but it didn’t. It did, however make me think about any number of falls that people have taken over the last year or so.

It is much less painful for me to talk about the falls suffered by other people, so let’s take a minute to do that. It seems so trivial, almost small time at this point but remember when Martha Stewart went to jail for 5 months because she allegedly lied about the sale of her Imclone stock just before the stock price plunged. She made $228,000 and was fined $30,000. She maintained her innocence and said “I didn't cheat the little people. ... We're all little people. I didn't cheat anybody out of anything.” This simple act of selling her stock, and all the controversy surrounding it, caused her to fall from grace. Or did it. Her fall was both temporary and not so painful. She decided not to let the ‘powers who had been’ screw around with her. She didn’t want the ‘fall’ to drag on . She didn’t want to lose her business or any serious money. And her recovery, which took almost no time, was total. No little people lost their life savings, and she didn’t lose serious money.

While we’re on the subject of serious money, let’s turn for a minute to Chris Cox. He is supposed to oversee serious money. In his official biography it says “During his tenure at the SEC, Chairman Cox has made vigorous enforcement of the securities laws the agency's top priority, bringing ground breaking cases against a variety of market abuses including hedge fund insider trading, stock options backdating, fraud aimed at senior citizens, municipal securities fraud, and securities scams on the Internet.” That must come as a surprise to all the people who lost serious money because Mr. Cox was not doing his job. Jim Cramer says Cox should be fired for letting short-selling run the market into the ground. Mr. Cox still has his job. The government has given billions of dollars in loans to banks, who were supposed to make loans but didn’t, and to corporate executives, who ran their companies into the ground. The executives of these banks, corporations and Wall Street firms still got their end-of-year bonuses, but no one knows where the money went, or for that matter, where it is. Think about this in terms of the Martha Stewart fiasco. Is it not just the least bit ridiculous that she went to jail and the rest of these crooks are living life to it’s fullest – with taxpayer money.

And talk about falls, jail and serious money. Who is a better example than Bernie Madoff. This guy bilked individuals, corporations, non profits and just about anyone he met out of 50 billion dollars. The people who invested with him were honored when he agreed to take their money. Honored. A friend of mine recounted the story of her friend who, about three years ago, called excitedly to report that Bernie had agreed to make investments for her. She lost 3 or 4 million – she’s too destroyed to figure out exact numbers. Bernie, unlike Martha, did not go to jail. Fifty billion dollars in fraudulent investments and he’s still at home in his Park Ave. apartment. He has an electronic device on his ankle and roams freely about that cushy residence, in a city that despises him and is still whirling from his chutzpa. But the question remains, where’s the money? If he’s still living in that apartment then there must be some money. Why is he allowed to spend it? Maybe he has fallen from grace but there seems to be no humiliation, embarrassment or punishment for his evil deeds. He has suffered no consequences for his heinous behavior. Why not? 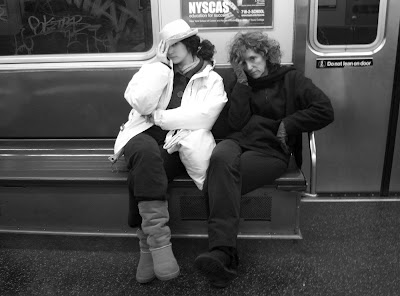 "Iris with her black eye, and Jordan, in sympathy..."
None of this makes any sense to me. Some people rewarded for criminal behavior and not doing their jobs. Some people going to jail because other people don’t like successful women. And others, just doing good deeds and trying to save the environment are punished with a black eye. Who really deserves a back eye? I repeat, it just doesn’t make any sense to me. We’re just sayin’.... Iris
Posted by Iris&David at 1:42 PM

its not the holidays 'till someone gets a black eye...

and this might be a good time to hit david up for something nice.

You certainly do not deserve a black eye. Take care, sweetie.

Iris, spousal abuse prison sentencing is much tougher in MA than in NY. So, in which state would you prefer this 'accident' occur in (I'm now guessing MA). Have you contacted an attorney yet? I hear your old buddy Elliot is now in private practice and available - go on and ring him up!

Also know that Madoff will serve far less time than old Davy boy ever will, which means that in the court's view, your shiner is worth something like $50 billion (that's B as in Bazillion) Even Martha Stewart ain't got that kind of jack laying around!