An Adventure to Hoboken, Bring a Knife!

Exactly what does “Breaking news” mean when it is used on any of the television networks? Does it mean that the news is actually breaking? Like it’s broken and it needs to be fixed or it needs some kind of a band-aid. Or does it mean “hey listen up, there’s something new we have to tell you.” And if the latter is the case than why is something called ‘breaking news’ repeated for hours and hours ad nauseum. Can’t something only break once? Take a glass or a heart, for example. The first time they break, they are broken. It might be that they can be repaired, but they are absolutely broken. The degree to which they are broken, and the time it takes to mend them may be different. But as my mother would say, “if it’s broken, it’s broken”. She would also say “Dead’s dead” and What is, is” but that’s a different blob.

My point is that because the networks want to get the viewer’s attention, they keep telling the viewer that they are watching something totally new and important. Of course this is not the case but they think the viewer is a moron – and why wouldn’t they. We continue to be viewers even when we know what they are telling us only breaks once, and the other 50 million times, it’s drivel.

Here’s my favorite most recent breaking news. Caroline Kennedy went to upstate New York to make a pitch for the Senate Seat. That was breaking news for two days. Governor Blagojevich’s troubles have been breaking for almost a week. Sure there have been different problems, but each one had at least three days of breaking. 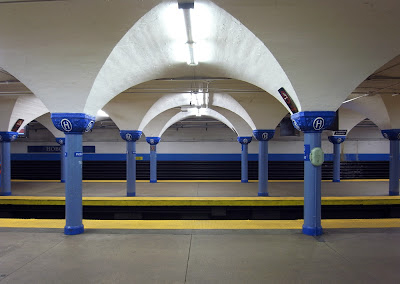 The Hoboken PATH Terminal, a thing of beauty
Here’s some breaking news. David and I went on an adventure to Hoboken last night. Hoboken is the new Brooklyn but it’s in New Jersey. When we were kids we thought of it as a dump. In our minds it was kind of a place whose only value was that it was across the river from New York City (and was the birthplace of Frank Sinatra.) It’s unclear when that started to change but after the Towers fell a number of businesses relocated to Hoboken – because there is a ferry and a PATH (Port Authority Trans Hudson) train. So there was easy access to mid-town and lower Manhattan. We have friends that moved there twenty years ago, paid very little for a lovely apartment and recently sold it for so much money that they bought a great place on the West side and moved back into the city. The same thing has happened to Brooklyn, Queens, and even Jersey City is on the way to chic-dom. And while they are still not as convenient as being right in the city (especially when the weather is bad or the subway isn’t working), they are not bad.

However, the thing that makes Hoboken a bit different from these other suburbs is the existence of Arthur’s Steakhouse. Arthur’s has existed for 100 years—give or take 40. My mom always loved to go to the sister restaurant (also called Arthur’s) in Morris Plains because it was close to home and you could get a great steak (Morton’s quality), and the most luscious roasted potatoes for $18. Over the years the price has increased to $22 in Morris Plains—an all cash business, and $24 in Hoboken which takes credit cards. The wine is still $5 a glass with a bottle of pretty good wine for $15 a bottle. There is also beer – in huge urn like glasses -- and other beverages but, in my usually not so humble opinion, there’s nothing like a glass of red with a great steak.

Although the menu is limited, they do have ribs and burgers as well as some chicken and turkey plates. It is absolutely not the place to go if you are a vegetarian.
Wait, more news just broke. The little broken body that was found about a week ago in Orlando still hasn’t been identified. Why is that news at all? What about the fact that nothing has happened is news. But I digress—almost into a tantrum. Here’s another, the man who was never convicted of molesting and killing Adam Walsh really was the murderer. I thought that broke a few days ago. It’s so hard for me to remember the actual time or day when it breaks with such frequency. Even the new Obama appointments, (which truly are important), can only be announced once as breaking news—but the networks, constantly competing for something to say, don’t really care about details—or news for that matter.

Back to important news about hearty steaks and local color. The people who you see eating at Arthur’s are not tourists. They are not there for an adventure. Most have been going there after ballgames with their teams (adults and children), for special occasions with their families, and just because it’s a great steak, for years. Our adventure was not about the place, it was about taking the train to Hoboken, to a place where we knew the food would be worth the money we spent. It’s hard to find a place like this as well as any breaking news, but it’s worth it to try. And like the news, there’s always something leftover for the next day. For a peek at the actual Breaking News of our Arthur’s adventure, click this link.... We’re just sayin’.... Iris 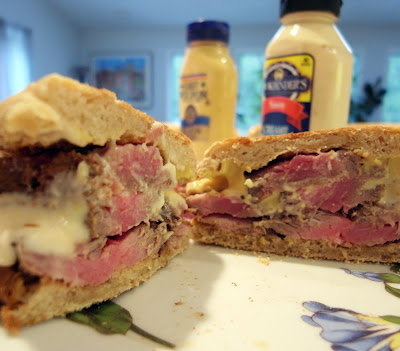 Two days later, some mustard and horseradish on an English Muffin... Heaven!
Posted by Iris&David at 12:15 AM

. . . And then you went and ruined it with half a gallon of A1 Sauce? How about bringing us all to the Palms next time (my favorite). No steak sauce in da house!

Oh well, to each his own and happy holidays to the entire family!