Every four years it seems that not only is there a new crowd of candidates presenting themselves to run for President, and that around each of them swirl a whole new cast of minor characters dealing with the Press (i.e. Me!) Many are just out of college, some have actually come from real world jobs, but most tend to be young and unschooled in the techniques of what it takes to be a press person covering a candidate. We professionials, and I use the term as loosely as a “loose meat sandwich” in aWaterloo, Iowa café, are left with the job of trying to educate the new flocks of Advance people in the ways of the world. From the first day they start working for a campaign they become suspicious of us, and are, I’m sure, fed with propaganda that there is no way the Press will ever really be your friend; beware, as they will do nothing but try and embarrass our candidate, and make them look as silly as possible for as many News Cycles as possible. I’m sure there are people in the press who feel their day isn’t complete unless they have scored a “Gotcha” on someone they are covering. Even at my ripe young age, however, I remain fixated on that ridiculous, age-old notion that the story (in this case the campaign) is more important than the messenger, and that my real job is to try and show something about that person, something which millions of viewers & readers won’t have a chance to see up close, and for themselves. The cynic in me acknowledges that campaigning, and the coverages thereof, have become somewhat like the attitude of workers in the waning days of the Soviet Union, who more than once told me “we pretend to work, they pretend to pay us.” In the modern, fourth estate/media rules-the-world version of that dictum, it goes more like “they pretend to run for President, and we pretend to cover them.”

I have somewhat fond memories of 1976, which was my first real campaign. (I arrived back from Vietnam in October 1972 just at the end of the process, though I did spend time with some Congressional and Senate candidates – the “fresh faces” of the ’72 campaign, which included Bill Cohen, Joe Biden, and Jack Kemp. (Admit it, can you even possibly imagine Joe Biden as a young, fresh face? That was about 437 millions words ago.) In ’76 I took the Trailways bus from Port Authority (even seedier then than it is now – and lacking Au Bon Pain) to Manchester, a trip which took somewhere between 5 hours and 2 months. Well, it only FELT like 2 months. But once there, I was trying to bum my way around on the Winnebagos of various candidates. Somehow, and we can’t actually figure out how his happened, on those long and amusing days on the Mo Udall campaign, Iris and I never met. How different our lives might have been if we had met on a campaign stop, and, early on, she had given me the redVelvetRope treatment (as in: don’t CROSS that line!) I was honing my political skills even then, and for about a day and a half, I even thought the former Penn. Governor Milton Shapp had a chance for the Democratic nomination. (Yes, my skills NEEDED honing if I thought Shapp was a possiblity.) In both 76 and ’80, Reagan was a force to be reckoned with.

In ’76, traveling with President’s Ford entourage just before the New Hampshire vote, I remember a great question from a mostly warm and friendly crowd at Nashua High School. The questioner was a Gorilla. And he asked a policy question about the economy. But he WAS a Gorilla (head –to-toe outfit.. but remarkably little mumbling). And President Ford answered him as if he were Lawrence Spivak. Not even a hint of irony – as if in the Ford White House, in the hallowed corridors of power in the West Wing, there were whole teams of Gorillas wandering around with position papers in folders, and perhaps, at a cabinet meeting where things got animated, swinging from one end of the table to the other via the chandelier. It’s funny what you remember. 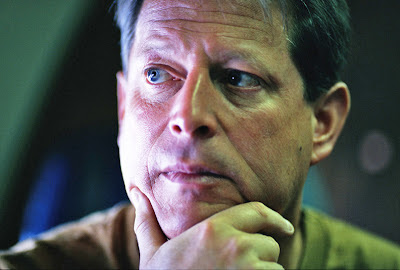 
The one thing that I have to admit I remember doing every year is trying to act as educator for those young campaign Press doobies who are assigned to deal with the press, but who hopefully won’t to have to actually touch one. The thing is this: for a photographer, you will almost never have better light than the gorgeous portraity light you have from an airplane window at 30,000 feet. Look at the pictures of the Kennedy campaigns, Reagan, the Clintons & Gore. Nothing gives you that soft, wonderful studio like bathing of lumiere like a giant reflector (the sun & blue sky, or the sunlight bouncing thru soft clouds) poring then through that small airplane window. They always think you are trying to trick them into asking the candidate for something which eventually get them yelled at. Couldn’t be further from the truth. I would prefer to have a studio in a permanently flying plane, have the candidate sit in the mid bulkhead row (i.e. no seats in front of them for 6 to 10 feet), and just take my chances. But as with most things in my professional life, I end up having to test things on myself. Each flight is a potentially different look: the way the clouds are or aren’t present, the angle of the sun to the plane, the glint of a hard reflection off the wingtip. Each of these gives a singular touch to the look of the picture. And everytime you fly, you have a new possibility for that artistic look. On the way back from Milwaukee last Friday, I was in an exit row, and took advance of the 2/2 seating on Midwest Express. Working with my tiny Panasonic Lumix LX-1 point/shoot camera, I’d hold it at arms length, and then look into the light, down from the light, away of the light, trying to catch something which could become one of those nifty TIME or American Photo covers. So, maybe I won’t be ON the cover of TIME this week as I was with John Kerry nearly four years ago. 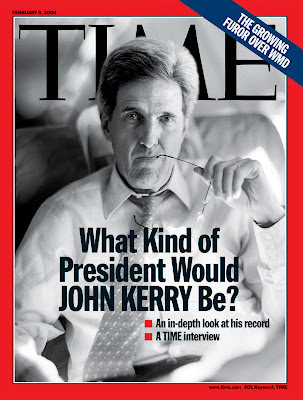 But the nice thing about digial photography is that you can usually see right away when you screw up, and take another chance to get it right. Now, if only someone could help me explain this to the twenty-something wunderkinds, with their Blackberrys in permanent array, unable to look you in the eye while they tell you which van to get aboard. Maybe the thing is.. you send them a text message as you walk across the parking lot to ask them a question, and the message is something like this: “Look into the eyes of the guy who is about to ask you a question…” We’re just sayin…. David 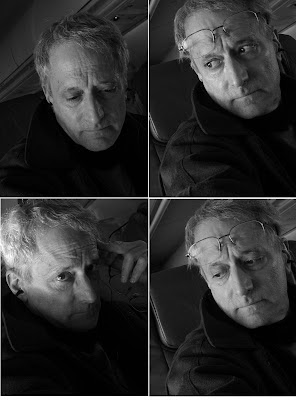 When you'd say,"Just one more.." at least a client cannot get upset and walk out the door (chuckle)..

AlGore looks particularly scary with the bluish light, especially given how he's become unhinged in the last 3 years.