Gift wrapping has never been my forté. It has been my failing, and hard as it is for me to admit, I can’t wrap a gift or cut ribbon or anything related to giving away a pretty package. It is unclear when I realized this was the case. It could go back to as far as when we did Christmas gift exchanges in elementary school. We were all told to bring a gift, worth no more than a dollar, but to wrap it nicely and it would go into a big grab bag. Everyone in the class chose a package—except mine. I was forced to take my own package home. It was humiliating but there was nothing to do except pretend I didn’t know who that package was from. Luckily I am a terrific gift buyer so I liked what I was going to give away, but still, a little surprise would have been nice.

The next time I noticed my wrap-ineptness was when I was about 8 or 9 and started to celebrate Christmas Eve at my friend Pam’s. It so exciting for a Jewish kid to be invited to celebrate this most mysterious holiday with people who knew about Jesus and giving. Over the years we developed a ritual. We would decorate the tree, have lasagna—Aunt Claire makes fabulous lasagna—together we would hang an ornament on the tree. Then we would open one gift per person after which I would go home. In the early years my sloppy wrapping wasn’t so noticeable. But over the years, when everyone elses improved (and Pam’s an artist so hers was really awesome), and mine still looked like an 8 year old had done it, I was mortified.

Time marched on. Gift wrapping was never on my list of talents. Oh how I tried to dress packages with ribbons and bows and glitter and love. I tried to convince myself it was the thought that counted, but it never made my packages look any prettier. So then I thought, why bother? Just put the gift in a cute bag and never mind. And it worked. But then I started to think, why are we just buying stuff that means nothing, in order to have something to give. Is that really what Christmas is about? Well, I’m still a Jewish kid and I don’t know what Christmas is about, but I love the excitement that surrounds the holiday and there are people I want to gift. 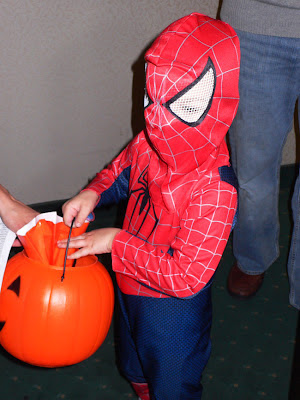 Trick.... or....
Anyway, tonight is Halloween and while we were cutting ribbon for the packages of candy I noticed that we had cut some of the ribbon too short. How typical, I thought. I can’t even cut the ribbon long enough to wrap around the bags of candy. And then I paused because, (remember I said I was the best gift giver), I never gave candy at Halloween. I used to give little toys and games. Jordan would always admonish me for giving toys not candy. “People don’t want to come here because that stuff is lame,” she would say. I didn’t care. Hated all the crap we gave to kids so I gave little toys and games.. Things like stickers, mini-cars, key chains, pocket games etc. When I told Jordan I was packing candy bags she could hardly believe it. “What are you thinking?”, she said. “You have never given anyone a piece of candy.” And that’s true. But I didn’t want to stock up on Halloween crap so I opted for a $12 bag of candy from Costco – fun sizes, all -- which I then divided and put in cute little orange bags to give to children. 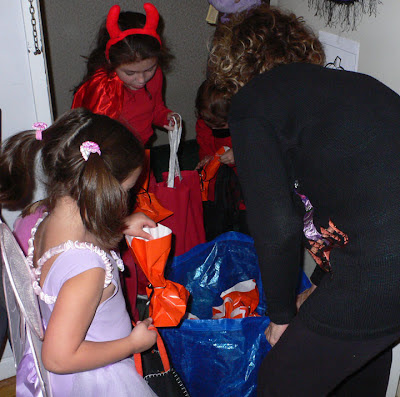 And here’s something that I realized while selecting the right bag of candy. I was only going to buy candy I liked. The bag I chose included Snickers, Reese’s peanut butter cups, Almond Joy, M&M’s, Nestles Crunch, Baby Ruth, you get the picture. Wasn’t I wonderful buying all this candy we love. And then when I was packing the bags I found myself putting all the candy I loved into a bag which David and I could attack later. It was hard to admit but I didn’t really want to share the candy I loved with any little pishers I didn’t know. And I started to think., did I buy toys because I didn’t care about sharing those with strangers. Did I hesitate to buy candy I liked because I am a selfish bitch and I couldn’t bear to part with it. Halloween, for me, has become more than a holiday where you can dress up as whomever you want. It has become a statement of character. This is much too heavy, so let me reflect for a minute on when I started to love the holiday. When we were in college in a very conservative Back Bay Boston, we were not even allowed to wear pants out of the dorm -- we had to wear dresses or skirts. But, we were a theater school and there were many gay students. No one was openly gay (it WAS the 60s), but on Halloween, all the gay people in Boston would cross dress and go to a party at a bar in the combat zone. We weren’t allowed in the bar but we would stand outside and admire the costumes. The performances were breathtaking. There were the most gorgeous men dressed as the most gorgeous women making audacious appearances. I loved the whole idea and, in fact, started to celebrate the holiday.

After Jordan left for school it just wasn’t as much fun to welcome the trick or treaters, so we stopped doing it—until tonight. We are in NY and David decided that it’s hard enough to be a kid in a NY apartment without having to forgo a Halloween experience, so we participated in the Leslie House Halloween celebration. I packed candy and we gave it out from 6-7 – we had theater tickets for 8:00. And limited as the time frame was, and terrible as I felt about giving out candy, it was still fun to see the kids enjoying themselves. And despite the fact that I can’t wrap a bag or a gift, I was still happy about giving away candy I loved, to kids who didn’t know it was not really what I wanted to do.
Times change and candy is still what kids want, and I remain unable to wrap or give a gift that looks like something someone wants. But they’ll still take it. We’re just sayin...Iris
Posted by Iris&David at 12:11 AM

I read somewhere that the number of household that eat their first purchases of candy intended for trick or treaters, is extremely high. (of course, I can't remember the exact percentage).. Obviously they, too purchase their favorites and have to replenish.... that explains why Reeses peanut butter cups are (same article) the "most popular" candy of choice at Halloween....

Yes, mom. Got your message about the game.
Indy was better than we thought.
But we still ended up kicking their asses.
Harding...my sympathies on the Jets. But don't forget. I sat through many losing seasons with the Pats...1-15 with Dickie McPherson? Not cool.

Hi set. You could just call me and tell me you love me. That would be good too.

Hi seth. You could just call me and tell me you love me. That would be good too.