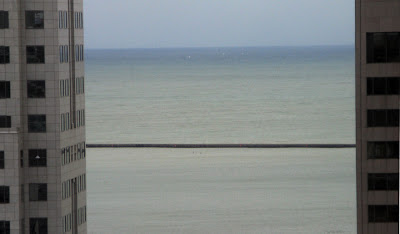 This morning, while I was overlooking the magnificent site of the Milwaukee skyline from the 23rd floor work out room, (it’s so lovely that one of the stalls in the ladies room has a glass wall which permits viewing), I was also watching the morning shows—not from the stall but from the treadmill. Every one of the shows had, predictably, the family of a service man or woman serving in Iraq. And everyone of the hosts said “I am thankful that there are troops serving in Iraq.” It really made me cringe.

Before anyone starts to scream “liberal pinko slut”, let me say this: I am grateful for the troops. (Period). I am thankful and often shocked that in this day of ‘all about me’, there are still young people who are willing to serve their country. I am thankful that they are willing to die for their country but I am not happy that they are dying in Iraq in a war based on a lie as well as making the friends of Cheney and Bush even wealthier than most people can imagine. I am nauseated when someone in the administration announces that the death toll is down and only 7 or 8 young people died this week—as opposed to what, 20 or 30, 150 or 500? The use of the word ‘only’ is truly despicable. One child dead in a senseless skirmish is one too many. How many parents of those kids are truly grateful that their child was among such a limited number. I’m sure right after they got the news they shouted “hooray at least he/she didn’t go with a large number of other kids.” What have we come to? Are we truly that insensitive? That unfeeling. That stupid?

About an hour ago, amidst out Thanksgiving preparations, there was a woman on NPR radio reading a letter to her dead son. In the letter she wrote about how sorry she was to have lost him. She said that she felt his presence every day, but never more than when she was at his grave. She talked about the beauty of his tombstone and how she never expected to die before he did. She did not say that she was happy that he gave his life. Nor did she indicate that she was grateful he served in Iraq. There was never a mention about how relieved she was about him being ‘only’ one of six children who died last week. Oh, and she also said that it was going to be hard for her to give Thanks this year—and there would be no celebration.

There isn’t a parent who wants to think that their child died for nothing. God knows I would not want my kids to die for nothing. Although I will admit I cannot imagine what kind of death they would have to suffer to be for something. But I also cannot imagine, what parent would want some other parent to suffer the same kind of loss in the unexplainable Bush power fantasy. And by the way, today yet another American General who served in Iraq (Sanchez, this time) confessed that it was a mistake to keep our troops there. I wonder what it will take for all the boys (and that is not a gender specific description), to finally say, “let’s get those kids out of there.” I wonder if there is any Presidential candidate, Democrat or Republican, who will actually end the stupidity. Certainly it won’t be any candidate who thinks we should still be there. But which of the candidates who think we shouldn’t will actually take on the defense contractors and the oil lobbies? Which of them will be able to compromise enough to get elected but yet will still be in a place where they are able to be independent once elected.

The whole discussion about who has enough experience to be President is moot. While it is true that Hillary understands the way things work in the White House, is it possible that she is so jaded by that information that she will be too cautious to make decisions that are courageous. In the same way, the Senators who are running are so indoctrinated by a failed bureaucracy -- will they be able to see how to be independent and compromising at the same time? The ex and present Governors who are running do have some management experience but will they also develop a ‘big picture’ vision for the country and our place in an increasingly dangerous world? This is too depressing. Let’s talk about Thanksgiving parties.

For many years we had Thanksgiving in Virginia. It changed a few years ago because it was easier for Boston and Seattle family to get to New Jersey. But the level of stress that came with that change increased over the years. It always started out OK. Dinner at the Reservoir Tavern the night before. Drinks at Johnny’s tavern for some. Meetings with old friends, flames and foes. Even the dinner preparations were easy. We always made the same thing—turkey, stuffing, green beans, mashed potatoes, and cranberry sauce. We even made it the same way except the one year Pam decided we need to cut back on the cream in the mashed, boy that sucked, but so what – it was about the company not the food. You know I’m lying. Thanksgiving is the one time it’s only about the food. Then the Boston kids stopped coming, it was too far for the whole Seattle family, and Pam’s family had to go to her sisters. So we decided to have dinner with Mom, Auntie, Lee and Marty, Jordan and anyone who had no place to go. After all the dinners were over, everyone (previously in attendance who was around) came to Mom’s for dessert. But then about three years ago, Mom always got sick on Thanksgiving—having nothing to do with the food. So, as you can imagine, in the past few years this has become an event we no longer looked forward to.

This year Mom is in Seattle, not feeling very well, and we decided to venture to Wisconsin. And I have been thinking about what I’m grateful for. There are the obvious things, like all the kids and selected family. (just kidding). There are the friends, for whom I am always deeply grateful. But what else? I am thankful that we can afford to celebrate so many occasions. I am thankful for nice weather—not just fabulous, but nice, with blue skies and warm breezes. I love the ocean, and the beach, and Napa. The apartment in New York is near the top of my thankful for list, and, of course, discount shopping. I know these are uncomplicated things to celebrate and that some are not within my control but they do make me smile, and where is it written that everything has to be complicated. But I guess right up on top is good health. I am really grateful for good health, not only mine but for everyone I know. And staying in good health is my fondest wish for all the children in the military, wherever they may be. We’re just sayin…Iris
Posted by Iris&David at 3:45 PM

Yes lots of stuff to be thankful for. Young men having to kill other young men at the whim of two old men is not one of them.

Thankful Bush will be gone soon. Not thankful he's not moving to Iraq to retire.

Thankful that I DONT have shares in Haliburton so I can buy a new ranch payed for by the bloodshed of babies,old ladies and kids who were once happy to be left alone to their own future,in their own way.

Not thankful Cheney won't repent. That man needs a good dose of foregiveness by the people that have faithfully followed him.

Thankful that I live in a country (Canada)were individual thought and the right to question political foreign policy is the practiced evolution, and not merely the secret revolution held in the darkened livingrooms of frighten, hopeful, people.

Not thankful that I live in a country that has seemingly forgotten the honorable blue helmeted peacekeeping past of its mother and fathers, and has paid for its dispicably short memory with the red blood stained uniforms of its sons and daughters.

Thankful for the sons and daughters...deeply...deeply thankful.

Talk about coincidence, "liberal Pinko slut" was my nickname in grade 3. I was reading Noam Chomsky pretty early. Was thinking of naming one of the pigs in the blanket "liberal Pinko Slut" for old times sake. Not so much because of her political views, but mostly because...well... she was pink. Didn't though, I was afraid the neighbors would get the wrong idea about her.

Stay warm...we had 5 inches of snow up here. It's coming your way. Hey, thats good news for the penguin!

no penguin, no snow, lots to be thnakful for--including your comments on our blob