Just Get The Glass 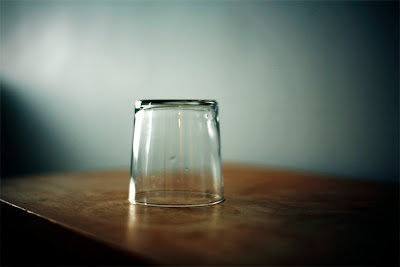 When we were little and someone would lose something, like a necklace or a key or whatever, my mother would take a glass put it on the kitchen table and turn it upside down. I have no idea why turning a glass upside down would lead to the discovery of a misplaced object, but it often did. Sometimes it took hours and sometimes days, but eventually, like magic, the lost item surfaced.

Over the last few years I’ve noticed that the number of glasses on my kitchen table has increased considerably. For whatever reason, and I am not discounting age but I don’t like to think about it, I can’t remember where I put things. For example, my Aunt Fritzie had this absolutely fantastic plastic penguin that you filled with toothpicks and when you dipped the nose of the bird, it released one pick as needed. It was made in Korea at a time when everything was imported from Korea instead of China. It was also a time when everyone smoked and I can remember my Aunt serving cocktails in their beautifully finished basement, with everyone sitting around smoking and pressing the penguin – if not for the pick at least for the entertainment factor.

The penguin somehow made it’s way to my mother’s house. I guess because my mother was the last one to have a house. When I was cleaning up “just stuff” I found the penguin. My brother was with me and we both remember that I put it in my suitcase to take home. Needless to say, when I got home, I couldn’t find it. So I turned a glass over on the table—where it remains now, three months later.

Then, before Halloween I purchased one of those giant bags of candy to dispense to children who would get all sugared up and not settle down for days. For this reason, when my kids were little, I never gave candy to kids. I gave little gifts like stickers, fancy pencils, colorful erasers and toys. Jordan was always embarrassed by this, “Why can’t you just give candy like normal people” but it was a matter of principle. I was just opposed to giving out sugared crap when there were alternatives. Anyway, this year I couldn’t find the little gifts. (Probably a good thing since they were from an Oriental Trading catalogue where everything is imported from China), I was sure I had put them safely away in the basement but despite my every effort, (including another turned glass) I could not find them, so I unhappily, I bought candy. Why did I need to buy anything, you ask. Well we were going to be in NY and we wanted to show our neighbors that we were nice people. Our neighbors in Virginia already know this.

As if that wasn’t depressing enough, I misplaced about 150 pieces of the candy. You see, after I bought it I thought I would take half to NY and leave the rest in Va. for our Hannukah party. When I got home last Monday I looked for the candy. I can’t remember where I hid it. I did hide it because I didn’t want to eat it. I bought candy I love and despite the fact that I don’t eat candy anymore I simply can’t resist a Snickers or M&M’s Peanuts. So I turned over another glass. And then I couldn’t find the candlesticks my Dad brought back from Africa after the war. The big war when we were fighting for Democracy—we all remember Democracy, right. So I searched the house and I couldn’t find them. I was so upset I sent David an e-mail and he suggested I look outside because when we were home a few weeks ago we had dinner on the deck. And there they were. I was surprised to see them suffering the consequences of any number of storms, as well as the cold, but at least there was no need for another glass.

Then I began to think about whether or not the glass would work for other losses. I mean what if you lost a friendship, obviously not because they died. What if you could just turn a glass over on a table and everything would be alright. And what about the loss of a job or a contract. How would you direct the loss request. Would you turn the glass upside down and say a prayer over it. Something like, “Dear Glass I really screwed up and I need you to help me figure out how to deal with it.” Maybe you would have to light candles and put a “schmata” on your head (it’s usually a napkin because a kitchen towel is too big), like we do on the Sabbath. It certainly can’t hurt. But then what would you do about disappointed expectations if it didn’t work. Would that lead to additional anxieties or perhaps the expense of a therapist. There are things to consider before we make any demands on the glass.

This is getting much too complicated. Like any old wives tale, it sometimes is close to the truth, sometimes an alternative for scare tactics and sometimes just nonsense. In the case of the glass, it provides hope for an aging hippie who believes that there is a solution for every problem—including not remembering. We’re just sayin..Iris
Posted by Iris&David at 3:59 AM

"Saint Anthony, St. Anthony, something is lost and must be found."

It always works. Eventually the thing misplaced shows up.

I learned this prayer in Italy from an American Catholic of Irish descent. Go figure.

Perhaps the upside down glass captures the spirit of St. Anthony, or the little poltergeist who hid the item in the first place? Bad poltergeist, bad, bad.

did you find Nana's penguin? TW

I fear the penquin--which was probably the most valuable thing in the house--is gone forever. And I'm not a happy camper

Hi..I just discovered your blog because I'd recently lost something and turned a glass over. A friend commented, "why do you turn a glass over if you lose something?" I told her that "my grandma did it, my mother did it and now i do it"..then i decided to research it and your blog came up!
what a nice penquin story! I have an alarm clock, a big ben, from my grandma's house. That clocked ticked so loud we nicknamed it "the bomb"..i would see if the ticking would be in sync when the WPIX (i think it was) 9'oclock movie came on! I treasure that little clock!'
Any chance you're from Brooklyn, NY?

My grandmother has been turning a glass upside down to find lost things for as long as i can remember. My dad does it and I do it too. Nobody understands me.
I'm from London, UK and none of my family have ever lived in the US. Strange!

I turn a water glass upside down to locate a missing item and it works every time.car keys, eye glasses, paper punch. Just about any item found within a matter of minutes. I have told this o many people and they call and thank me as they also said it works for them. I can't explain how and would really like to know how this jogs your memory. Let me know please.

turning a glass upside down on a table to find missing item works
every time.

My grandmother always taught us to turn a glass upside down when we lost something. No idea where the superstition came from. She grew up in NYC.

Our house keys vanished into thin air from the place they are usually kept. They prevented us from going out of the house shopping. We searched for them all night and gave up at 1 am. I did dowse for answers and the dowsing crystal admitted that a ghost had hidden them. It also said that they would reappear that night and not the morning. Meanwhile a friend told me about the glass upside down trick. So I turned a glass upside down and left it in the lounge. We then went upstairs to do something else and when we returned to the lounge, there the keys were back in the place they went missing from. Hmmm.... No one else lives in the house. Freaking mystery. But yeah.. the glass trick worked and the ghosts were severely told off and thanked in the same sentence.

I was told to do this too ?.. will it return a lost love I wander.. ?.. that's more important than the object I lost ...hmm ? one can dream I guess.. I do wish this item would turn up.. hope this works

Speaking into the glass and turning it upside down to find lost items really works. I have been doing it for years, and how my kids do it. Just believe in the glass to return it back to you and it will.